LUCKY SEVERSON, guest anchor: This week we have a holiday convergence. December 25 — Christmas Day — is also the first night of Hanukkah, the eight-day Jewish festival of lights. For the growing number of interfaith families who observe the rituals of both holidays, this year presents an unusual challenge. We visited the Miller family in Takoma Park, Maryland, to find out how they're handling this year's "December dilemma."

Sue Katz Miller and her family are adding the final touches to their Christmas tree and also looking forward to the celebration of Hanukkah. This year, for the first time since 1959, it begins on the evening of Christmas Day. 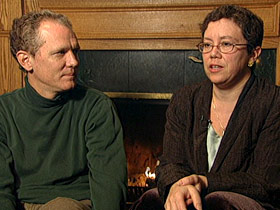 SUE KATZ MILLER: Our children have two cultures. They have two sets of extended family.

SEVERSON: Their children, Aimee and Ben, attend an interfaith Sunday school where they study both Jewish and Christian religious traditions.

Ms. MILLER: For an interfaith family, it's especially important to keep the two separate in order to help the children understand what is a Jewish ritual and what is a Christian ritual.

EDMUND CASE (Publisher, Interfaithfamily.com Online Magazine): I wouldn't recommend having a — what is obviously a Christmas tree and you know, having blue and white tinsel or hanging Jewish stars from it. I think that that really is blending and mish, you know, mashing things together, which I think is not a good idea. 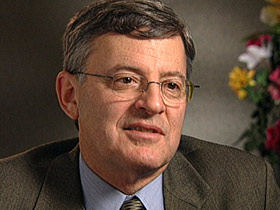 Ms. MILLER: I don't see a conflict because Hanukkah is always something that you celebrate in the evening and, by then, Christmas is over anyway. The only sort of adjustment that I think we'll make this year is that that first night of Hanukkah, the kids will not get a present because every year we have one night where, instead of getting a present, the kids give to a charity. That's sort of something that feels very Jewish, to do that. And it's also Christian in [that] some of the origins of giving presents on Christmas were about helping the needy.

PAUL MILLER: In my family, we always had a crèche. It seemed, if we were going to be celebrating Christmas, that we should have a crèche.

Ms. MILLER: We want them to understand the meaning of the Christmas story, and that involves telling the story of Jesus and his birth. And the crèche is a very hands-on way of learning about that. I mean, our kids know that Jesus was a Jew; they understand those points of connection between the two religions.

Every other year that we're with his Christian family for Christmas, we do go to their church, which is an Episcopal church.

Hanukkah, you don't go to temple, because it's not a major Jewish holiday. 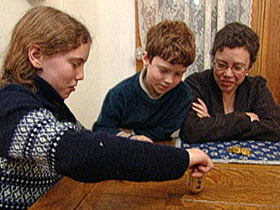 SEVERSON: Hanukkah rituals like playing the dreidel game and eating food cooked in oil mark just one small part of a full calendar of Jewish observance.

Ms. MILLER: I take the kids to synagogue for other holidays, like Rosh Hashanah, Yom Kippur.

Mr. MILLER: Then Christmas or Hanukkah has its place within the year, and it's not the -- THE event.

Ms. MILLER: We do Rosh Hashanah, Yom Kippur, Passover, Tu B'Shevat, Simchat Torah on the Jewish side. And on the Christian side, you know, in Sunday school, they're talking about or we're celebrating Lent and Advent and Easter and Christmas.

Mr. CASE: We hear from a lot of our readers, especially young adults who have been raised in interfaith families, that they learn a great deal about tolerance by having the experience of growing up in an interfaith family.

One of the things I like about Hanukkah is that it doesn't have all the commercial folderol that Christmas has taken on and so in some ways it's easier to feel sort of spiritual when you're lighting those candles.

I think by doing the crèche and by talking about the Christmas story, we're trying to sort of reclaim the actual meaning of Christmas, and by tying it in with helping others as we do with Hanukkah, we're trying to reclaim those holidays for our children.

When Christmas and the first night of Hanukkah fall on the same day, the growing number of interfaith families who observe both holidays face an unusual challenge. We visited the Miller family in Takoma Park, Maryland, to find out how they’re handling this “December dilemma.”