LUCKY SEVERSON, guest anchor: On Wednesday (March 8), President Bush toured the Gulf Coast and saw some of the faith-based relief work up close. Two other high-profile guests on the Gulf Coast this week were evangelist Billy Graham and his son Franklin. The two are holding a series of meetings in New Orleans called a “Celebration of Hope.” Kim Lawton reports.

KIM LAWTON: Evangelists Billy and Franklin Graham said they wanted to bring some spiritual encouragement to the people of New Orleans. They came with an optimistic vision of a city that will emerge from its hardships stronger than ever.

Reverend BILLY GRAHAM (In Speech): New Orleans will become a center that people will look to for spiritual help in the days to come.

LAWTON: Still, Graham admitted he has been overwhelmed by the magnitude of the destruction. 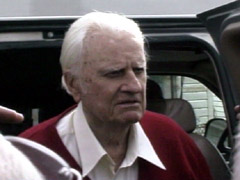 Rev. B. GRAHAM (In Speech): I’m absolutely devastated at what I’ve felt and seen in the couple of days that I’ve been here.

LAWTON: Franklin Graham took his father on a tour of some of the worst-hit areas in the Ninth Ward and St. Bernard Parish. Nearby, workers were trying to repair one of the damaged levees. The Grahams saw neighborhoods that look much the same as they did six months ago.

Rev. B. GRAHAM (At Press Conference): There’s only one hope that I can see, and that’s through prayer and through Jesus Christ.

Reverend FRANKLIN GRAHAM: I think the faith-based community, what they’ve been able to contribute is huge.

LAWTON: He said such efforts stand in sharp contrast to the inefficiency of many government agencies. 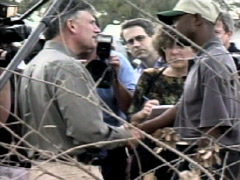 Rev. F. GRAHAM: The government still can’t give away trailers. It’s amazing to me that in Arkansas you have a field of mobile homes, and you have thousands of people right here who could use them. The pastors can put somebody in that trailer within weeks.

LAWTON: The Grahams made an effort to support local pastors, and at a special prayer meeting, many said the visit meant a lot.

Reverend JEFF WICKER (East Fort Baptist Church): I have some Catholic friends in the community, and I tell them Billy Graham represents our pope. He is who we look to. He is the leadership in the 20th century of the evangelical faith.

Reverend LOUIS HILLIARD (Community Bible Baptist Church): I believe that Brother Billy Graham still has that powerful influence, you know, because he can relate not only to the spiritual world but also the political world.

LAWTON: The 87-year-old evangelist appeared frail but showed flashes of his trademark sense of humor.

Rev. B. GRAHAM (In Speech): In those days, I would preach at least 50 minutes, maybe an hour and a half. No wonder we had a hard time filling the stadium!

LAWTON: He said he believes there are no answers as to why this tragedy happened.

Rev. B. GRAHAM (In Speech): God has allowed it. I don’t believe he sent it, but he allowed it for a reason and a purpose, and it may be to build a new New Orleans.

LAWTON: Given the ongoing situation in many of the neighborhoods here, local residents say messages of hope will be needed for a long time to come.