BOB ABERNETHY, anchor: Now, a report on African-Americans joining the Church of Jesus Christ of Latter-day Saints — the Mormons. There are still only a few thousand black Mormons out of about five and a half million Mormons throughout the U.S. But the number is significant, because for many years Mormon leaders taught that blacks had been cursed by God. Therefore the church had barred them from the priesthood — full membership in the church. Deborah Potter has our story.

DEBORAH POTTER, correspondent: It’s Sunday morning in North Philadelphia, and Nicole Giles is about to be confirmed. Nicole grew up a Baptist, but she’s decided to join the Church of Jesus Christ of Latter-day Saints — the Mormons.

NICOLE GILES (Mormon Convert): I needed this. And they came into my life when I was going through a really hard time. And, you know, I’m just thankful.

POTTER: Thomas Russell is visiting the church for the first time. A Mormon missionary convinced him to give it a try.

THOMAS RUSSELL: It wasn’t too much of what he said. It was the power that I felt in his light that convinced me to come. 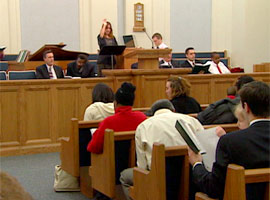 POTTER: This staid service is not the style of worship many African Americans are used to. But this brand-new church on North Broad Street draws them in.

Brother IYOWUNA COOKEY (Church of Jesus Christ of Latter-day Saints, Philadelphia): If you are visiting us for the very first time today, you should feel very welcomed here, and we hope that we’ll be seeing a lot more of you.

POTTER: Black membership in the LDS church is growing here in Philadelphia’s toughest neighborhoods and in cities around the country. There’s no official estimate of converts by race, but in a church of about 12 million members worldwide, African Americans remain a distinct minority.

POTTER: Many Mormons spend two years as missionaries, preaching the word according to the Bible and the Book of Mormon, which they believe was revealed to their church’s founder, Joseph Smith, after God and Jesus Christ appeared to him in upstate New York in 1820.

Elder STOTT: And if God chose and called Joseph Smith to be a prophet, a prophet like Moses, Abraham, and those guys, then this message is unique. This message is awesome. 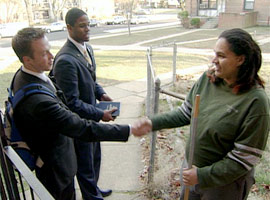 POTTER: Mormon outreach in black communities was almost nonexistent until 1978, when then-president Spencer Kimball reported a revelation saying blacks could become priests. In a church with no professional clergy, all LDS males become eligible for the priesthood at around age 12. Denying that right to blacks meant they could not perform rituals or hold leadership positions.

Today, the church is expanding in black neighborhoods, including Harlem in New York, where it opened a new chapel late last year. A few blacks now hold high positions in the church. Ahmad Corbitt is a stake president in New Jersey, roughly the equivalent of a Catholic bishop presiding over a small diocese.

AHMAD CORBITT (Stake President, Church of Jesus Christ of Latter-day Saints, New Jersey): I think the appeal is the power of the gospel on our families — a very practical appeal — teachings that make us better human beings and better family members. And the African-American community needs that salvation of the family.

POTTER: But despite its efforts to appeal to blacks today — celebrating their heritage and tracing their genealogy — the church has never repudiated its old teachings that blacks were cursed by God as descendents of Cain or Ham. Armand Mauss is former president of the Mormon History Association and a visiting scholar at California’s Claremont Graduate School of Religion. 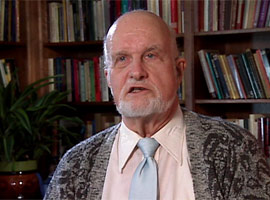 Professor ARMAND MAUSS (Former President, Mormon History Association and Visiting Scholar, Claremont Graduate University, School of Religion, Claremont, CA): The old ideas that were used to justify this ban on priesthood, those ideas have survived even after the policy was changed that they were supposed to justify. And so you still encounter places in the church, among white people, in which the ideas come up again.

DARRON SMITH (Coeditor, BLACK AND MORMON): They’re harmful for blacks because they psychologically damage blacks, whether they admit that or not. And they — and one way that they — I think that this harms blacks is that blacks often will recite the same kind of folklore and justification for it as whites do.

CORBITT FAMILY (Saying Grace): We’re grateful for the gospel in our lives and we say this in the name of Jesus Christ. Amen.

POTTER: Ahmed Corbitt argues that it’s what the church does now that counts, not its history of excluding blacks. 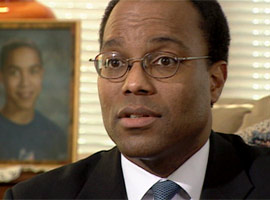 Mr. CORBITT: There was a purpose in it. I don’t know that we fully understand it, that anyone does, including, I’ve heard leaders — top leaders — say that very thing. But we can come together and feel the fruits of it, the love of it and spirit of it, and we can know it’s true despite that.

POTTER: Not good enough, says Darron Smith. He’s says his faith is strong and he’s staying in the church, but he wants to see it change.

Mr. SMITH: The church has never come out publicly and said this is an issue. This is a problem. We need to stop spreading pernicious rumors, innuendos, folklore about our black brothers and sisters as being cursed. This is not productive in our efforts to proselytize blacks and to retain blacks in the church.

Prof. MAUSS: The old folklore, the old doctrines about curses and marks and the displeasure of God and all of that could easily be repudiated and, I suspect, will be someday.

POTTER: But experts say that admitting a past mistake could undermine the authority of Mormon leaders and the LDS belief that God speaks directly to them.

UNIDENTIFIED PASTOR: God is our Father. He loves us and he wants to instruct us.

POTTER: What matters most to Thomas Russell is finding a spiritual home. He doesn’t know much about Mormon church history yet, but he likes what he’s seen so far.