The following remarks were delivered by Bill Moyers at the funeral service for William Sloane Coffin on April 20, 2006, at Riverside Memorial Church in New York City. 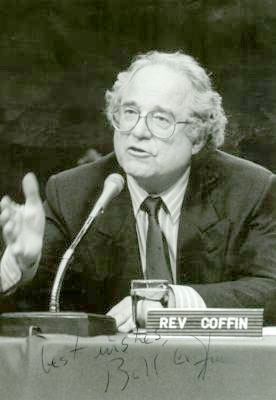 There are so many of you out there who should be up here instead of me. You rode with Bill through the Deep South chasing Jim Crow from long-impregnable barriers imposed on freedom. You rose with Bill against the Vietnam War, were arrested with him, shared jail with him, and at night in your cells joined in singing the Hallelujah Chorus with him. You rallied with him against the horrors of nuclear weapons. You sang with him, laughed with him, drank with him, prayed with him, grieved with him, worshipped and wept with him. Even at this moment when your hearts are breaking at the loss of him, you must be comforted by the balm of those memories. I envy your lifelong membership in his beloved community, and I am honored that Randy, his wife, asked me to speak today about the Bill Coffin I knew.

I saw little of him personally until late in his life. We met once in the early ’60s when he was an adviser to the Peace Corps, which I had helped to organize and run. He spoke to the staff, inspired us to think of what we were doing as the moral equivalent of war, and told us the story of how, as a young captain in the infantry following military orders at the end of World War II, he had been charged with sending back to the Soviet Union thousands of Russian refugees made prisoners by the Germans. Some of them he had deceived into boarding trains that carried them home to sure death at the hands of Stalin. That burden of guilt sat heavily on Bill’s heart for the rest of his life. He wrote about it in his autobiography, and raised it 40 years later when we met in the waiting room of the television studio where I was about to interview him. That’s the moment we bonded, two old men by now, sharing our grief that both in different ways had once confused duty with loyalty, and confessing to each other our gratitude that we had lived long enough to atone — somewhat. “Well,” said Bill, “we needed a lot of time. We had a lot to atone for.”

I had called him for the interview after learning the doctors had told him his time was now running out. When he came down from Vermont to the studio here in New York I greeted him with the question, “How you doing?” He threw back his head, his eyes flashed, and with that slurred (from a stroke) but still vibrant voice, he answered, “Well, I am praying the prayer of St. Augustine: Give me chastity and self-restraint … but not yet.”

He taught me more about being a Christian than I learned at seminary.

His witness taught me — he preached what he practiced. But his writings taught me, too –ONCE TO EVERY MAN; LIVING THE TRUTH IN A WORLD OF ILLUSION; THE HEART IS A LITTLE TO THE LEFT; CREDO; LETTERS TO A YOUNG DOUBTER; and of course that unforgettable eulogy to his drowned son, Alex, when he called on us to “improve the quality of our suffering.” During my interview with him on PBS I asked him how he had summoned the strength for so powerful a message of suffering and love. He said, “Well, we all do what we know how to do. I went right away to the piano. And I played all the hymns. And I wept and I wept, and I read the poems, like A. E. Houseman — ‘To an Athlete Dying Young.’ Then I realized the folks in Riverside Church had to know whether or not they still had a pastor. So I wrote the sermon. I wanted them to know.”

They knew, Bill, they knew.

This will surprise some of you: not too long ago Bill told Terry Gross that he would rather not be known as a social activist. The happiest moments of his life, he said, were less in social activism than in the intimate settings of the pastor’s calling — “the moments when you’re doing marriage counseling … or baptizing a baby … or accompanying people who have suffered loss — the moments when people tend to be most human, when they are most vulnerable.”

So he had the pastor’s heart, but he heeded the prophet’s calling. There burned in his soul a sacred rage — that volatile mix of grief and anger and love that produced what his friend, the artist and writer Robert Shetterly, described as “a holy flame.” During my interview with him, he said, “When you see uncaring people in high places, everybody should be mad as hell.” If you lessen your anger at the structures of power, he said, you lower your love for the victims of power.

I once heard Lyndon Johnson urge Martin Luther King to hold off on his marching in the South to give the president time to neutralize the old guard in Congress and create a consensus for finally ending institutionalized racism in America. Martin Luther King listened, and then he answered (I paraphrase): “Mr. President, the gods of the South will never be appeased. They will never have a change of heart. They will never repent of their sins and come to the altar seeking forgiveness. The time has passed for consensus, the time has come to break the grip of history and change the course of America.” When the discussion was over, Dr. King had carried the day. The President of the United States put a long arm on his shoulder and said, “Martin, you go on out there now and make it possible for me to do the right thing.” Lyndon Johnson had seen the light: for him to do the right thing, someone had to subpoena the conscience of America and send it marching from the ground up against the citadels of power and privilege.

Like Martin Luther King, Bill Coffin also knew the heart of power is hard; knew it arranged the rules for its own advantage; knew that before justice could roll down like water and righteousness like a flowing river, the dam of oppression, deception, and corruption had first to be broken, cracked open by the moral power of people aroused to demand that the right thing be done. “In times of oppression,” he said, “if you don’t translate choices of faith into political choices, you run the danger of washing your hands, like Pilate.” So he aimed his indignation at root causes. “Many of us are eager to respond to injustice,” he said, “without having to confront the causes of it … and that’s why so many business and governmental leaders today are promoting charity. It is desperately needed in an economy whose prosperity is based on growing inequality. First these leaders proclaim themselves experts on matters economic, and prove it by taking the most out of the economy. Then they promote charity as if it were the work of the church, finally telling troubled clergy to shut up and bless the economy as once we blessed the battleship.”

When he came down from Vermont two years ago for that final interview, we talked about how democracy had reached a fork in the road — what Tony Kushner calls one of those moments in history when the fabric of everyday life unravels and there is this unstable dynamism that allows for incredible change in a short period of time — when people and the world they are living in can be utterly transformed for good or bad.

Take one fork and the road leads to an America where military power serves empire rather than freedom; where we lose from within what we are trying to defend from without; where fundamentalism and the state scheme to write the rules and regulations; where true believers in the gods of the market turn the law of the jungle into the law of the land; where in the name of patriotism we keep our hand over our heart pledging allegiance to the flag while our leaders pick our pockets and plunder our trust; where elites insulate themselves from the consequences of their own actions; where “the strong take what they can, and the weak suffer what they must.”

Take the other fork and the road leads to the America whose promise is “life, liberty, and the pursuit of happiness” for all. Bill Coffin spent his life pointing us down that road, in that direction. There is nothing utopian about it, Bill said; he was an idealist, but he was not an ideologue. He said in our interview that we have to keep pressing the socialist questions because they are the questions of justice, but we must be dubious about the socialist answers because while Amos may call for justice to roll down as waters, figuring out the irrigation system is damned hard!

He believed in democracy. There is no simpler way to put it. He believed democracy was the only way to assure that the rewards of a free society would be shared with everyone, and not just elites at the top. That last time we talked he told me how much he had liked the story he had heard Joseph Campbell tell me in our series on “The Power of Myth” — the story of the fellow who turns the corner and sees a brawl in the middle of the block. He runs right for it, shouting: “Is this a private fight, or can anyone get in it?”

Bill saw democracy as everyone’s fight. He’d be in the middle of the fork in the road right now, his coat off, his sleeves rolled up, his hand raised — pointing us to the action. And his message would be the same today as then: Sign up, jump in, fight on.

Someone sidled up to me the other night at another gathering where Bill’s death was discussed. This person said, “He was no saint, you know.” I wanted to answer, “You’re kidding?” We knew, all right. Saints flourish in a mythic world. Bill Coffin flourished here, in the cracked common clay of an earthly and earthy life. He liked it here. Even as he was trying to cooperate gracefully with the inevitability of death, he was also coaching Paul Newman to play the preacher in the film version of Marilynn Robinson’s novel GILEAD. He enjoyed nothing more than wine and song at his home with Randy and friends. And he never lost his conviction that a better world is possible if we fight hard enough. At a dinner in his honor in Washington he had reminded us that “the world is too dangerous for anything but truth and too small for anything but love.” But as we left, he winked at me and said, “Give ’em hell.”

Faith, he once said, “is being seized by love.” Seized he was, in everlasting arms. “You know,” he told me in that interview, “I lost a son. And people will say, ‘Well, when you die, Bill, Alex will come forth and bring you through the pearly gates.’ Well, that’s a nice thought, and I welcome it. But I don’t need to believe that. All I need to know is God will be there. And our lives go from God, in God, to God again. Hallelujah, you know? That should be enough.”

Well, he’s there now. But we are still here. I hear his voice in my heart: “Don’t tarry long in mourning. Organize.”