BOB ABERNETHY, anchor: Now, a strong, perhaps upsetting report on religious and ethnic persecution in Myanmar, which many still call Burma, in Southeast Asia. Its military rulers allow no democracy or free speech and persecute minority groups, among them Christians and Muslims. Lucky Severson reports from Thailand, near the Burmese border.

LUCKY SEVERSON: Whoever took these pictures risked their lives to document the increasing attacks by the Burmese military against that country's ethnic tribes, many of whose members are Christians. Human rights groups say it is part of a campaign of oppression that has resulted in almost a million and a half displaced people, many hiding in the jungle and running for their lives. Critics say the generals who control Burma are conducting a form of ethnic cleansing hidden from the eyes of the outside world. 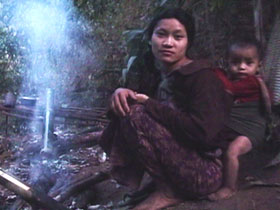 Dr. CHRISTINA FINK (Anthropologist and Author, LIVING SILENCE: BURMA UNDER MILITARY RULE): So it's not just about killing people, it's also about destroying their culture.

SEVERSON: Christina Fink is a noted anthropologist, author, and scholar on the Burmese military. She's been working in Asia for 20 years.

Dr. FINK: There are people who are arguing that what's happening in Burma is genocide. I think that most people would agree that a very strong case could be made for crimes against humanity.

SEVERSON: Since 1962, the Burmese military has ruled the country they now call Myanmar with an iron fist. The generals say the tough measures are necessary to keep the country and its many factions together. But recent reports coming out of Burma suggest a crackdown more brutal than any in recent years.

According to several reports, at least 3,000 villages have been burned; churches have been destroyed; rice crops ruined; and people terrified of being captured or worse are fleeing their homes.

These young men are Burmese soldiers extorting livestock from the locals.

The military has been at war with ethnic tribes almost since the British granted Burma independence in 1948. The tribes want autonomy. The military says no. But it's not only the ethnic groups suffering under the generals, it's the whole of this country of 43 million, the part tourists aren't allowed to see -- the abject poverty, the repression. 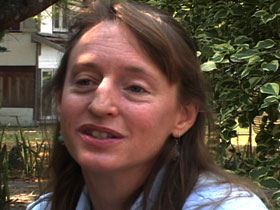 Dr. FINK: And you can be in prison for things like just doing a one-person demonstration where you hold up a sign saying, "We need the UN to help us" or "Please have a dialogue with the democracy movement." You'll be put in prison for many, many years for that.

JOHN GLENN (Former Burmese Political Prisoner) (Putting on Shackles): Before we enter into solitary confinement, they put these shackles on our legs.

SEVERSON: John Glenn spent six years behind bars, sentenced to hard labor for speaking out. He now works at this tiny museum on the Thai border dedicated to Burma's hundreds of political prisoners.

Mr. GLENN: So that we political prisoners in prison call those forced labor camps killing fields.

SEVERSON: The generals who control Burma are said to be greatly influenced by astrology. They keep a tight grip on religious activities inside the country.

Dr. FINK: The regime will target, for instance, churches and mosques and burn those down in the Christian areas or in Muslim areas. But they also go after minority groups that are Buddhist. But the Christians and Muslims also face oppression in the cities. For instance, evangelical Christians in Rangoon have had their churches closed down.

SEVERSON: The worst crackdown was in 1988, when hundreds of student demonstrators and civilians were massacred. Two years later there was an election, but the military refused to accept the resounding victory of the leader of the prodemocracy party, Aung San Suu Kyi. Instead, she was placed under house arrest and remains there today. In 1991, while in captivity, she was awarded the Nobel Peace Prize, but still the military has not loosened its grip.

Dr. FINK: There's a joke in Burma that -- why are there no dentists in Burma? The reason is because you are not allowed to open your mouth in Burma. And I think that really explains how people feel there.

SEVERSON: There are few jokes in the countryside. This 17-year-old just lost his leg to a land mine, laid by the military. We were given this video by a group calling themselves the Free Burma Rangers. These volunteers go as teams inside Burma on dangerous missions to give aid and comfort to their besieged countrymen. They also carry in Bibles and hymn books and some, like Pat Boone, conduct Christian services. He was named after the American singer and serves as a Free Burma Christian pastor.

PAT BOONE (Christian Pastor, Free Burma Rangers): You still remember their faces, their smiling face. And then when you come back here, oh, you pray for them and you would like to do something for them. 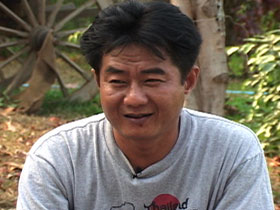 Dr. FINK: Thousands and thousands of women have been raped, and there is documentation of that. They also try to humiliate the family members of that woman by tying up the husband nearby where he can hear his wife being raped.

SEVERSON: Just inside the Thai border there's a clinic that offers life-saving health care to thousands of Burmese. It's an amazing place, treating about 100,000 patients a year. It was founded by Dr. Cynthia Maung, who escaped Burma in 1988. Her assistant is Lisa Houston.

LISA HOUSTON (Clinic Assistant to Dr. Cynthia Maung): Because you have to be very, very determined to do what she has done. But at the same time, I think she does everything with sort of compassion.

SEVERSON: The generals regard Dr. Cynthia as an enemy of the state. They burned down clinics she set up inside Burma, so she started training medical teams and sending them across the border. She's also been called the Mother Teresa of Burma, but she refuses to talk about herself. Dr. Maung is not optimistic about the future.

Dr. CYNTHIA MAUNG: It is very hard for all people suffering a lot. But there has been no positive improvement or dialogue.

SEVERSON: In recent years, more than two million Burmese have escaped across the border and are living elsewhere in Asia. Some, like Pat Boone, continue risking their lives to carry in bundles of supplies and a message of hope. 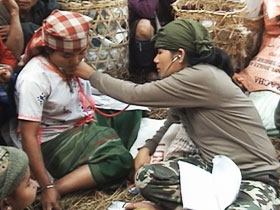 Mr. BOONE: This is my people, my homeland, my responsibility, and then this is my life. To risk your life or to die for your people is the best.

SEVERSON (To Mr. Boone): That's what life is all about?

SEVERSON: People like Zaw Min with the Democratic Party for a New Society still dream of the day his party can exist in his own country.

ZAW MIN (Democratic Party for a New Society): Restoration of democracy in Burma is our dream. That's why we have to continue. If we don't continue this movement, who will? So we have to do this, but not for us -- for our new generation.

SEVERSON: All the people we spoke with agree that democracy will come to Burma ultimately only with increased pressure from the world outside. In the meantime, even though the Burmese military encourages tourism on a restricted basis, everyone we spoke with recommends that tourists spend their money elsewhere.

ABERNETHY: The U.S. government imposes trade and economic sanctions against Burma, and every year, in its report on world religious freedom, the U.S. labels Burma a "country of particular concern."

In Myanmar, which many still call Burma, military rulers allow no democracy or free speech and persecute religious minority groups. Human rights groups say there is a campaign of oppression that has resulted in almost a million and a half displaced people. Critics say the generals who control the area are conducting a form of ethnic cleansing hidden from the eyes of the outside world.