BOB ABERNETHY, anchor: We continue today our pre-election series on politics 2006 — on the air and on our Web site, where there is now a special area devoted to religion and politics. This week, the story of a radical change that appears imminent in Minnesota’s fifth congressional district in Minneapolis. A seat long-held by a Norwegian-American is likely to be taken over in the November election by an African American Muslim. Fred de Sam Lazaro reports. 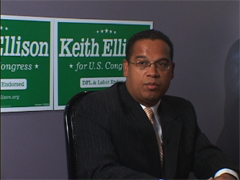 DE SAM LAZARO: Keith Ellison says he’s comfortable in church, synagogue or mosque. He’s a lawyer and a state representative who grew up Catholic in Detroit. He converted at 19 before moving to Minnesota and is observant of Muslim tenets, including fasting during Ramadan and praying five times a day. His politics, however, are not conservative.

Mr. ELLISON (speaking to group): You are the people who don’t care if somebody calls you a bleeding heart, right? Right?

DE SAM LAZARO: In this largely urban district, the 43-year-old father of four won a crowded Democratic primary race for a seat vacated by a retiring incumbent.

Professor LARRY JACOBS (Humphrey Institute of Public Affairs, University of Minnesota): The fifth congressional district, where Ellison was running, is one of the most liberal Democratic districts in the country, and Ellison was the most liberal candidate in the Democratic primary on issues such as health care. He was the one who supported the single payer approach. On the issue of the Iraq war, he was the one who favored a quicker withdrawal from Iraq. 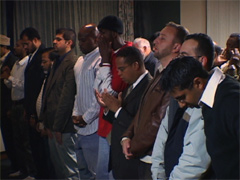 DE SAM LAZARO: But Jacobs says what really clinched Ellison his primary victory was support from a community few politicians ever thought to tap — Muslims. Minneapolis’s Muslim population isn’t the largest in North America, but it’s grown substantially in recent years. The city, for example, has the largest Somali population in North America. These new Americans haven’t been politically active, but they were galvanized by Ellison’s candidacy.

Mr. ELLISON: They are looking for their representatives to really stand up for due process and the rule of law. The whole idea of profiling people because of what they look like or the countries they come from or their accent is something that I think the Muslim community is concerned about. And I’ve been concerned about racial profiling for many years and introduced bills on it in the state legislature and advocated to have it prohibited even before I was in the state legislature.

DE SAM LAZARO: Ellison’s support did not waiver despite a series of stories about his past.

UNIDENTIFIED REPORTER (to Ellison during debate, Twin Cities Public Television): There are reports about your failure to amend campaign finance reports. Of course, folks know about this number of parking tickets, moving violations, and your suspended driver’s license. But I’m curious, how should voters view all that?

Mr. ELLISON: Of course, these kinds of things are important, and I apologize, and I should have paid better attention. But the fact is at the end of the day people want to know, are you going to work for them? Do you care about them?

DE SAM LAZARO: But the most stinging criticism came over Ellison’s one-time support for the Nation of Islam and his writings in praise of its often anti-Semitic leader, Louis Farrakhan. Ellison’s Republican opponent, marketing professor Alan Fine, is Jewish. 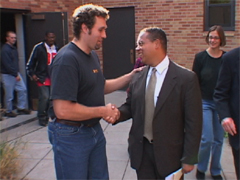 Professor ALAN FINE (Republican Congressional Candidate, Minnesota’s Fifth District, during debate, Twin Cities Public Television): I don’t think he’s fit to be in Congress. You know, if we have someone who has been part of a hate group following somebody who, like Louis Farrakhan…

Mr. ELLISON (during debate): I’ve never been a part of any sort of a hate group. It’s just a complete distortion, misrepresentation of the truth.

Prof. FINE (during debate): Keith Ellison wrote articles praising Louis Farrakhan in the early ’90s. Is that true, Keith? Did you write those articles?

Mr. ELLISON (during debate): Yes, I did. But I also explained that I’ve come about a new point of view on this issue when more information came to my attention.

Prof. JACOBS: I give him high scores for damage control. Ellison pretty systematically went through the district and other parts of the Twin Cities meeting with Jewish leaders, meeting in temples, holding forums, and talking to a good number of Jewish leaders and members of the community, and I think he put to rest a lot of the concerns.

DE SAM LAZARO: Ellison has campaigned well outside his base — the Muslim and African- American communities. After Catholic mass last Sunday, for example, he went to the Lyndale United Church of Christ, a congregation that strongly supports gay marriage.

Mr. ELLISON (speaking to congregation): Just like we should not make laws, enshrine in the Constitution law that says that people of different colors can’t be married; that states should not decide who gets married based on sex either.

Mr. ELLISON: I said, “Look, you know, as a Muslim, you’re getting visits from law enforcement officials, and you haven’t done anything. You’ve heard about relatives being stopped in the airport. You feel vulnerable at this time. Do you want to be the one to say who should not have rights, if you understand what I mean?”

DE SAM LAZARO: In a district that George Bush lost by a 70-30 margin last time, most political analysts say Ellison is a strong favorite to win on November 7.

For RELIGION & ETHICS NEWSWEEKLY, this is Fred De Sam Lazaro in Minneapolis.