BOB ABERNETHY, anchor: If you’re homeless in Washington, D.C. and sick, perhaps close to dying, and you end up in a city shelter, the people who work there might telephone a place called Joseph’s House and ask if they can take you in. It was founded by a Christian doctor who speaks about trying to see God in everybody. It’s staffed by a few people on salary and volunteers, and it’s funded by government, foundations and private donors. Lucky Severson paid a visit.

LUCKY SEVERSON: Melvin White could not be greeted more warmly or graciously if he were checking into a five-star hotel.

PATTY WUDEL (Director, Joseph’s House, to Volunteer): Would you just hang this up for Mr. White? 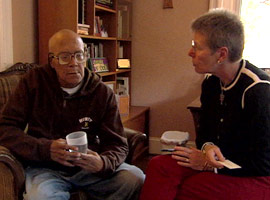 SEVERSON: This is Joseph’s House in Washington, D.C., the equivalent of a five-star hospice — an extraordinary place that comforts the dying with a mixture of Christianity and Zen Buddhism. More than likely it will be Melvin White’s last home. He is suffering from the final stages of colon cancer. Melvin says for years he was a cook at a local hotel and a pool hustler on the side. After he got sick, he got evicted.

MELVIN WHITE (Resident, Joseph’s House): I came home from work from the hospital from chemo one day, start the key in the door, and it turned back in my hand.

SEVERSON (to Mr. White): They changed the lock?

Mr. WHITE: Changed the lock on me.

SEVERSON: Melvin is the kind of person who Dr. David Hilfiker was thinking of when he founded Joseph’s House 16 years ago as a place for terminally ill, homeless, African-American men with nowhere to die but the streets.

Dr. DAVID HILFIKER (Founder, Joseph’s House): This was a very special place for many men. It became the first, the only place that they ever loved, ever had, that said, “You can stay here as long as you live.”

SEVERSON: For probably many of these men, this was the most loving home they ever had in their lives? 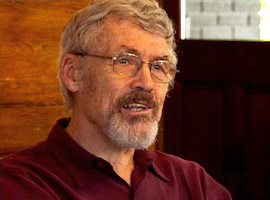 Dr. HILFIKER: Absolutely, absolutely. And certainly, I mean, they had been on the street for 20 years, and this is a chance to have a home.

SEVERSON: Although most of the 300 or so patients who have called Joseph’s House home have been black men, more and more are women, like Theresa Batch. She has colon cancer.

THERESA BATCH (Resident, Joseph’s House, talking about Tiffani Boerio): Well, she meets me every morning and greets me, so I call her “sunshine.” This morning, the first word that came out of my mouth: “Hi, sunshine. Praise the Lord for you.”

SEVERSON: Theresa has been here three months, has some good days and some bad. She is surrounded by the proud faces of Joseph’s House alumni.

Ms. BATCH: I look at the families that passed on, and some of them that didn’t, that made it through the cancer that they had in their bodies, you know. And I see the beauty of their souls and their minds and their hearts, you know.

Ms. WUDEL (Commencing the house meeting): It’s a special meeting, because today was the day that Melvin White came to join us.

SEVERSON: Patty Wudel runs the place, to use a phrase of hers, with “exquisite attention.” Patients are treated as honored guests, something they are not accustomed to. 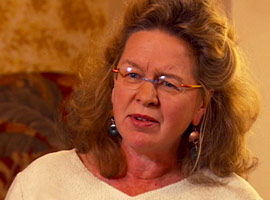 SEVERSON: She was attracted to Joseph’s House partly because of the emphasis on the social Gospel.

Ms. WUDEL: The Beatitudes sure play a big part for the foundation of Joseph’s House as a place of justice and compassion, with Jesus as an important teacher.

SEVERSON: Patty was also attracted because the therapy here includes the tenets of Zen Buddhism.

Ms. WUDEL: It’s developing a self-awareness, paradoxically to be able to forget myself and serve the needs of the person in front of me.

Dr. HILFIKER: Our hope is not to present God to anybody, but to see God in everybody, and to allow that person to have the relationship with God that is deepest for them.

Ms. WUDEL (to Mr. White, at meeting): My wish for you is that you will find deep healing here in all the ways that you really need it.

MARY (Volunteer, Joseph’s House, to Mr. White, at meeting): I’m so happy that you are here, and I hope that you can sort of find physical warmth and joy and peace. 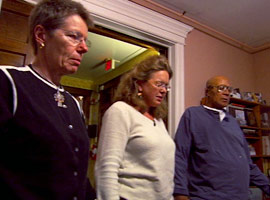 JOHN (Resident, Joseph’s House): You just lay back, man, and let them do all they need to do, and you will be well. I know you’ll be satisfied.

Mr. WHITE: You know, I feel a whole lot better in just in this one day than I have been in the last couple of years, you know.

PRISCILLA NORRIS (Nurse, Joseph’s House): What is amazing to see happen over and over again is those who are sicker are cared for and paid attention to by those who are at that moment are stronger, and I don’t mean us.

Ms. NORRIS: It fills my heart to meet another person and serve them, because I’m a well person right now, and they are not a well person. It isn’t a helping as much as it is a serving.

Ms. WUDEL: So many people wake up in the morning and are grateful that God woke them up to live another day. And kind of looking at their day from my point of view — feeling well and healthy — their day looks pretty rough. But it makes me think and wonder about my own gratitude for being alive in my own life.

Ms. BATCH (Singing “The Star-Spangled Banner”): “…and the home of the brave.”

SEVERSON: The first day we were at Joseph’s House, Theresa filled the house with blast of sunshine. A few days later, she couldn’t get out of bed. But she was never alone. Her buddy, Tiffani Boerio, was at her bedside. 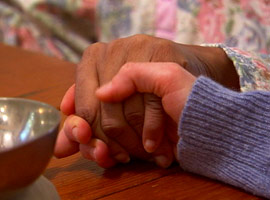 TIFFANI BOERIO (Volunteer, Joseph’s House): I just want to be with her. I mean, I came to work this afternoon at one o’clock because I knew that she hadn’t been doing well when I left on Sunday. And it was just compelling just to sit with her. And I think for me that is just one way to love her.

Ms. NORRIS: Those of us who have known Theresa all know that she has other times gone into these deep sleeps for two or three days and then popped up like the Energizer bunny. It’s not my sense that she’s going to pop up from this one, but I’m hoping that she will.

SEVERSON: Patty and Priscilla grew especially close to one patient, William. Both were with him when he died.

Ms. WUDEL: I felt the blood stop flowing in my friend. Time stopped still then. It was a profound, sacred moment for me.

Ms. NORRIS: There is so much more to a human being than the body, and the sensation of mystery and of soul is tangible. It’s mystical and it’s mysterious. It is the closest I can possible get to what I see as God.

Ms. BOERIO: In some way the world has changed for me because of that experience, and I think that, yeah, in a lot of ways I will never be the same. 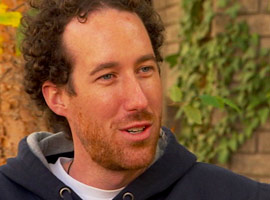 BREY CRIBBS (Volunteer, Joseph’s House): It definitely made me less afraid of death. In our society I feel we don’t experience much first-hand of death, and I really saw how it was a reversal of the birth process.

SEVERSON: Brey Cribbs is a social worker, a seminary student, and a volunteer at Joseph’s House.

Mr. CRIBBS: More and more you become less capable, and you need the support of people to just take care of you. But at the same time there’s a childlike quality of the person that tends to become much more joyful and more peaceful.

SEVERSON: Staffers and volunteers agree they are the ones who learn life’s lessons about things like love and selflessness from people who have never caught a break, like Joshua Murray.

Ms. NORRIS (to Mr. Murray): They can solve it; you’ll still need to let infectious disease know that you don’t need the urgent care.

SEVERSON: Joshua is taking radiation treatments for lymphoma, which he says doctors told him is a result of the HIV virus he was born with 23 years ago. His twin brother escaped the disease. 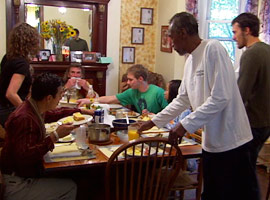 Dr. HILFIKER: For me the perfect image of the house is a party going on down here, with music and people that we’ve invited and decorations and people dancing, and somebody upstairs dying at the same time.

SEVERSON: A few years after Dr. Hilfiker started Joseph’s House, he was suffering from bouts of deep depression, and he told the patients he could no longer be their doctor. He says one of them, a former drug kingpin and a tough guy named Peewee, taught him a lesson he won’t forget.

Dr. HILFIKER: Right away Peewee spoke up. “Yeah, doc, we’ve been noticing something wrong. You just take care of yourself, and we will still be here for you.” And it was just very simple. But what it was ultimately was an acknowledgment of my brokenness, from a person who was very broken. It was really the turning point in my accepting my depression.

(Group reciting the Lord’s Prayer): Our Father, who art in Heaven, hallowed be Thy name…

SEVERSON: Every Thursday the group comes together in prayer. On this day, their thoughts were with Theresa Batch. Theresa died after spending three months with the family at Joseph’s House, and she knew she was loved.

(Group reciting prayer): …and deliver us from evil, for thine is the kingdom and the power and the glory, forever and ever. Amen.