BOB ABERNETHY, anchor: The question of whether to ordain gay clergy has challenged and divided many denominations, including now Conservative Jews along with the Orthodox and Reform, one of the three main movements of American Judaism. The Orthodox strongly oppose gay ordination. Reform Jews accept it. Now, the Conservative movement's Committee on Jewish Law and Standards has recommended that Conservative seminaries should be allowed to admit gays. Betty Rollin reports. 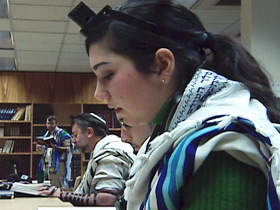 BETTY ROLLIN: In 1985, Conservative seminaries began ordaining women -- a big change. And now there is what some consider a bigger and even more controversial change: the decision of the Committee on Jewish Law and Standards to allow openly gay men and women into the seminaries and to allow Conservative rabbis to perform same-sex commitment ceremonies. Rabbi Elliot Dorff was one of the three rabbis who wrote the paper in favor of the decision.

Rabbi ELLIOT DORFF (Professor, University of Judaism’s Ziegler School of Rabbinic Studies, Los Angeles): Scientifically we now know about the etiology of human sexuality in a way that our ancestors never did. And so we know that when people engage in homosexual sex they are not doing it as an act of rebellion against Jewish law. They're doing it simply because that's the way they were created.

ROLLIN: Rabbi Dorff is a professor at the University of Judaism's Ziegler School of Rabbinic Studies in Los Angeles, which is the first Conservative seminary to allow gays. Most Conservative seminaries abroad are against admitting openly gay students. Latin America's Conservative seminary in Argentina won't even consider it. Canada and the United Kingdom, though both generally liberal towards gays, are against, as is Hungary, which has yet to consider female ordination. And in Israel, they've just begun to discuss the issue.

ROLLIN: The controversy about gay ordination stems from a verse in Leviticus. 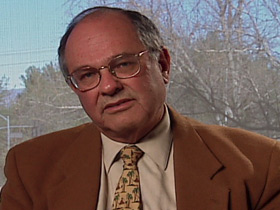 ROLLIN: So what the law committee did was to admit gays into the rabbinate only if they do not engage in that one homosexual act.

Rabbi DORFF: It's a compromise between trying to maintain the tradition on the one hand and on the other hand trying to be aware of modern scientific realities and modern personal realities.

Rabbi JOEL ROTH (Professor, The Jewish Theological Seminary, New York): Jewish law is clearly without ambiguity opposed to any sexual behavior, either between men or between women. It is almost impossible to justify permitting such behavior, and that is precisely what the authors of that paper did.

ROLLIN: Rabbi Joel Roth, a professor of Talmud at the Jewish Theological Seminary in New York, which has yet to decide whether to admit gays, co-wrote a paper opposing gay ordination. Although he was instrumental in the movement's ordaining women, he feels that Jewish law clearly prohibits gay ordination.

Rabbi ROTH: This is the uncontested, universal, unanimous position of Jewish legalists for 2,000 years. To overturn it on the basis of weak presumptions of law puts you outside the system. So to permit what God forbade is a very difficult theological step. And to do it in perpetuity is almost impossible without denying God's part in the Jewish legal system.

NOAH BICKART (Student, The Jewish Theological Seminary): The spiritual path of the halacha, of Jewish law, is so incredibly central to who we are as Jews that it may be at times that the individual has to relinquish some of his or her rights in order to be part of a broader community. 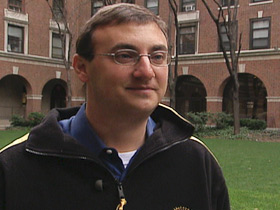 ROLLIN: But most students at the New York seminary, like Eytan Hammerman, are in favor of gay ordination.

EYTAN HAMMERMAN (Student, Jewish Theological Seminary): Judaism is a religion where people have pursued equality, have pursued moral rights. And treating homosexuals - gays and lesbians -- who were created in God's image as we believe all people are is very much the Jewish thing to do.

ROLLIN: The Chesir-Terans are an unusual family. Ian and Daniel are gay. They are raising three African-American children, and they are observant, conservative Jews.

IAN CHESIR-TERAN: We are woven into the fabric of our synagogue. We are there every Shabbos, every week. We participate to the fullest extent in every aspect of synagogue life. We send our son to a Conservative yeshiva day school.

ROLLIN: Daniel is a developmental psychologist, and Ian is a lawyer who also takes classes at the Jewish Theological Seminary. 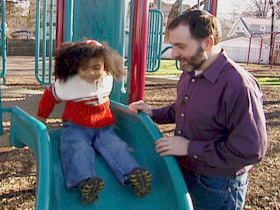 DANIEL CHESIR-TERAN: And frankly even with this decision, we're still not fully on par. We still can't have what the rabbis call "kiddushin" [Jewish marriage ceremony]. They say we can only have a commitment ceremony, which is the equivalent of saying you can have civil unions but not real marriage.

ROLLIN: Still, both men are pleased with the direction the Conservative movement seems to be taking.

Mr. DANIEL CHESIR-TERAN: One thing that I'm very happy about with the decision is that it represents something I'm very proud of in terms of the Conservative Jewish community, which is its willingness to struggle to engage with the text and make it apply to our lives. I'm not completely satisfied with the full range of where it went, but I think it's wonderful that there is a process of engaging and of debate that's ongoing. 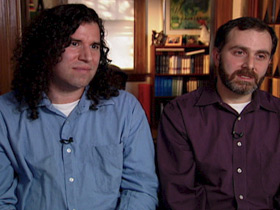 ROLLIN: The Jewish law committee's decision to allow gay ordination is not binding. Seminaries are free to accept or reject it. And if they accept it, there's no telling how many Conservative synagogues will accept gay rabbis.

The question of whether to ordain gay clergy has challenged and divided many denominations, including Conservative Jews. The Orthodox strongly oppose gay ordination, but reform Jews accept it. Now, the Conservative movement’s Committee on Jewish Law and Standards has recommended that Conservative seminaries should be allowed to admit gays.