BOB ABERNETHY, anchor: Four years ago our correspondent Fred de Sam Lazaro visited an AIDS hospice in a Buddhist monastery in Thailand. This year he went back and discovered that low-cost new drugs are keeping many patients alive, and the hospice is also a museum, teaching visitors, especially young people, about AIDS causes and consequences. Nevertheless, AIDS education still has a long way to go. 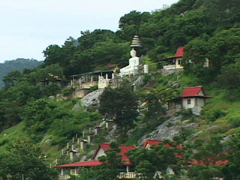 FRED DE SAM LAZARO: Thailand’s Prabhat Namphu Buddhist monastery is an unlikely combination of two things: AIDS hospice and tourist attraction. Amid a display of cadavers, visitors — including many school kids — observe what HIV does to the human body. Beyond hospice care, the temple’s goal is to educate the public.

Abbot PHRA ALONGKOT DIKKAPANYO: I hope that this year maybe more than 300,000 people come to our temple.

DE SAM LAZARO: When we last visited in 2002, dozens were dying each month, abandoned as they were in life by families who did not even collect their remains. But that same year, Thailand began to make available the once prohibitively expensive antiretroviral or ARV drugs for AIDS.

Abbot DIKKAPANYO: It has changed the whole understanding of the place. I would say it’s the “temple of life.”

Reverend MICHAEL BASSANO (Volunteer): People come here with HIV, and they sense that here they find family, acceptance, nourishment, and a willingness to keep living, and that changes the whole reality here — that it’s not just a place of people in their last days.

Some have even formed a dance troupe — testament to how ARV drugs can restore life to normal — normal, that is, as long as they stay inside the walls of the temple, which is in central Thailand city of Lopburi.

One thing has not changed. 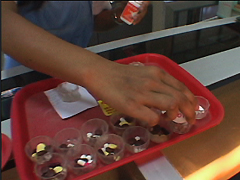 Rev. BASSANO: This is a new man. He just came.

Rev. BASSANO: He’s 50-years-old. His family just left him, and they came over and just dropped him off and left him here with us. When he came he was all scaly, all full of scales this morning. So now we put Vaseline all over his body, and it’s cleared up pretty well. So I wonder — we wonder why at home they didn’t take care of him.

DE SAM LAZARO: Many like this man are dropped off, their disease untended, many with tuberculosis, an infection they must survive before they are physically fit to go on to the AIDS medicines.

NOK ENG (Temple Resident, through translator): The only time I go out of here is to get my medicine. If I put a long sleeve shirt on my arms are covered and people won’t notice my scars. I’d be very uncomfortable if I wore a shirt like this one.

DE SAM LAZARO: Thirty-two-year-old Nok Eng left the temple when her health improved. But she came right back in a few months. Health care was harder to find for her and her HIV-positive husband, and it was especially tough at her factory job, where people knew she was HIV-positive.

Ms. ENG (through translator): Everyday at lunch I could hear people whispering next to me, gossiping about me, being sarcastic. I just couldn’t take the criticism.

DE SAM LAZARO: Most painful, Nok’s parents, who live in a rural community, wanted little to do with her.

Ms. ENG: I told my parents that I wanted to come and visit, and they said, “Just stay where you are.” They said that I would humiliate them. 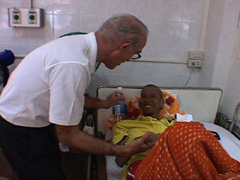 Abbot DIKKAPANYO: They take their children to our temple and learn about this problem, because father, mother have not enough knowledge.

MECHAI VIRAVAIDYA: People go in there, they get frightened: “I’m afraid of these people; I don’t want to see because they look terrible.” And I would say the last choice would be to have a community of those living with HIV, like a leper colony.

Mr. VIRAVAIDYA: We lend money to a pair of people, one infected, the other not infected. Together they must do business. The uninfected person encourages you and also creates, tries very hard to create understanding, compassion within the village so that people know who that this person is living with HIV, have a chance on a daily basis to communicate, to listen, and somebody explaining, “Look, that person is perfectly normal. You watch, I go with him. I let him ride on the back of my bike and all these things.”

DE SAM LAZARO: In the village of Banjan, Duang Deenok accepted an invitation from her HIV-positive aunt to start a food business. She admits she was nervous at first.

DUANG DEENOK (through translator): At first everyone was pretty scared. So we went to talk to the doctor, because my auntie was taking care of all these children, feeding them. The doctor said that if we’re afraid that the children were infected, we could bring them in to get checked. 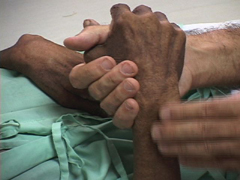 DE SAM LAZARO: Both women say they’ve been open in the community about the aunt’s HIV status.

DE SAM LAZARO: Over time the two women say there have been few problems with social acceptance, possibly because Plak shows no outward signs of illness. The business — fried chicken and spicy vegetables — has been brisk, and there’s only the occasional snide comment at the food stall, they say.

Ms. DEENOK (through translator): Some people say, “Hey, did you bring AIDS with you today?” When they act like this I say AIDS isn’t that easy to get. You can’t get it from the ticks on a dog. I tell them that you only get AIDS from needles and sex. Think about it. What I made here, you can eat. But if you do get AIDS, I’ll take you to where you can get medicine. Sometimes I’m just sarcastic because they’re not always nice to me.

DE SAM LAZARO: Because of awareness campaigns in the 1990s, most Thais learned how HIV is and isn’t transmitted. Thailand’s once-high HIV infection rate came down almost 90 percent through the decade. But complacency set in, and public education also tapered off, says Mechai.

Mr. VIRAVAIDYA: And because public education had died down, knowledge of HIV, to the extent to which it’s discussed, goes down and down and down. So stigma is still around and gets stronger because — for the lack of public education. So we just have to continue to do more, and that stigma with come down. But nothing works like actually seeing a person living with AIDS/HIV and getting them to have an experience with HIV people. That’s the best experience of changing attitudes.

UNIDENTIFIED WOMAN (through translator): People can tell that even though I have AIDS I’m still living my life, doing my work. I just want to tell you guys, “Don’t discriminate.”

DE SAM LAZARO: On the day we visited this rural school, the lectures were followed by frank sex education sessions for these high school students — a particularly critical group. After declining for years HIV infections among young Thais has gone upward again.

Abbot DIKKAPANYO: More than 50 percent of the new cases who are infected with HIV are the children — our children. Big problem for our country.

DE SAM LAZARO: Experts say the message [to] fear AIDS but not people with AIDS must be repeated again and again, in temples and schools, or it will get lost. Millions of Thais consume Coke and Pepsi everyday, Mechai says, but that doesn’t stop the soft drink companies from spending millions of dollars to remind them to do so.

For RELIGION & ETHICS NEWSWEEKLY, this is Fred de Sam Lazaro, in Lopburi, Thailand.

JOURNAL OF SOCIOLOGY AND SOCIAL WELFARE: "The role of Buddhist temples in the treatment by HIV/AIDS in Thailand" by Tomoko Kubotani and David Engstrom, December 2005