BOB ABERNETHY, anchor: We have a special report today on the refugees from Iraq. Whose responsibility are they? In Washington, the House this week (May 22) approved a bill that would grant visas to perhaps 500 Iraqi and Afghan translators who fear for their lives because they have helped the U.S. But there are, in all, nearly 4 million Iraqis who have fled their homes — half still in Iraq, half in neighboring countries. Kate Seelye reports from Amman, Jordan on what has become the world’s largest refugee crisis.

KATE SEELYE: Along Jordan’s border with Iraq, customs police search incoming visitors. Iraqi families like these are fleeing their country’s escalating violence. Some 50,000 people a month are leaving Iraq, according to the United Nations. Most have been escaping to neighboring countries like Jordan and Syria. 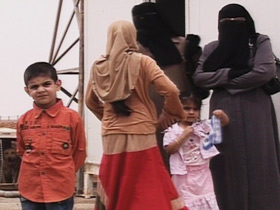 For years, Jordan kept its border with Iraq open. But then several Iraqis carried out suicide attacks in the capital, Amman. They crossed this frontier in 2005. These days, very few Iraqis are being admitted. This Jordanian taxi driver supports the move.

AHMAD KARAMEH (Taxi Driver, through translator): The Iraqis have terrorist organizations. Because of this, you don’t know who to trust.

SEELYE: Still, an estimated 700,000 Iraqis have fled to Jordan. They don’t live in refugee camps, however. Most are in Amman, residing among Jordanians. They include Sunnis, Shiites, and Christians. Some are wealthy. Many belonged to Iraq’s middle class. Others are poor, like these women who sell cigarettes in downtown Amman.

SEELYE: Um Kassim has been working as a street vendor for the past four months. She asked to be interviewed in her home. She didn’t want to draw attention to herself. That’s because Um Kassim is here illegally, like many Iraqis. 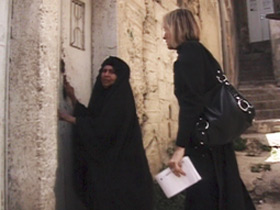 Visas are only valid for several months here. A residency permit requires a bank deposit of more than $100,000. That’s more than most Iraqis have. Um Kassim lives in one windowless room. She shares it with her son Hussein, his wife, and their four children. Hussein says his son was hit last year by shrapnel. He was injured during a battle between the U.S military and a Shiite militia. Um Kassim says the family had to leave Iraq.

UM KASSIM (through translator): There was only fear and terrorism and killing.

SEELYE: Um Kassim says the Jordanian police leave women like her alone. But they do deport Iraqi men who overstay their visas. Hussein says his uncle was recently caught and sent back to Iraq. As a result, Hussein hasn’t left the house in four months.

HUSSEIN (through translator): I’m not asking Jordan to give me work. I just want it to let me be, to let me go out freely.

SEELYE: The family is barely managing. Most of their possessions were donated by Caritas, a Catholic relief organization. Caritas is one of the few charities dealing with the refugee crisis here. But it’s only funded to address the needs of some 5,000 vulnerable Iraqi families.

SAMAR BANDAK (Caseworker, Caritas): They are in a very desperate state. They feel so helpless about their situation, especially that they have no guarantees here. 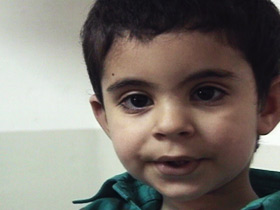 SEELYE: Here at this Caritas health clinic, Iraqis wait hours to see a doctor. Many were well- off professionals back in Iraq. But in Jordan, they are starting to run out of money. Most Iraqis don’t have the right to work here. Their children are barred from most public schools. And as Iraqis’ savings diminish, some, like this mother of five, are increasingly desperate.

RAYISA (through translator): How can I live? How can I raise my son? We’ve lost all our belongings. It’s very hard.

SEELYE: The Christian charity World Vision is focusing on the needs of Iraqi children here. Advisor Ashley Clements fears the refugees will become more desperate with time. He says countries like Jordan and Syria must give them basic rights.

ASHLEY CLEMENTS (Emergency Response Advocacy Adviser, World Vision): We’re also calling on the host governments themselves to formalize the status of these refugees, to allow the children to go to school, access health care, to allow their parents to actually earn an income, and that the borders remain open.

SEELYE: But Jordan regards Iraqis as temporary visitors. It refuses to guarantee them rights or protection. Jordanian authorities say their country has already done enough.

NASSER JUDEH (Government Spokesman): We’re talking about a country of just under six million people, and somewhere in the region of 700,000 Iraqis are here. So it’s more than 10 percent of the population, so it’s a strain. 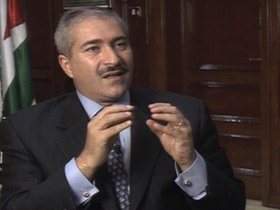 SEELYE: The strain is creating resentment among Jordanians. The influx of Iraqis has sent real estate and other prices soaring here. And this is not Jordan’s first refugee crisis. In 1948, the country absorbed hundreds of thousands of Palestinians fleeing the Arab-Israeli war. Today Jordan says it cannot afford to assimilate any more refugees.

Mr. JUDEH: We estimate that this is costing us about $1 billion a year. We’re hoping that the government of Jordan will be assisted financially.

SEELYE: The United Nations High Commissioner for Refugees (UNHCR) has been trying to bring the crisis to light. In April, the agency held a major international conference. UNHCR official Anne-Marie Deutschlander says it was a chance for host countries to air their concerns.

ANNE-MARIE DEUTSCHLANDER (Senior Protection Officer, United Nations High Commissioner for Refugees): I would say one of the big issues is burden-sharing. Certainly that’s what all the countries in the region are asking – burden-sharing in terms of taking people. We’re not just talking about finances, but in terms of, you know, hosting people.

SEELYE: Tens of thousands of Iraqis have applied for asylum in third countries. The UN agency has been in charge of processing their applications, but very few Iraqis have been resettled. The UNHCR has been lobbying countries to increase their asylum quotas, but this year the agency expects to resettle no more than 7,500 refugees from Jordan.

Ms. DEUTSCHLANDER: You can do the math. If we’ve got several hundred thousand, at least, in country, it’s a very small percentage. 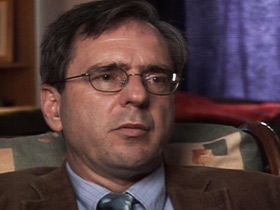 SEELYE: Joost Hilterman is an expert on the crisis in Iraq. He says a lot more Iraqis need to be resettled, and the U.S., he adds, should bear the largest burden.

JOOST HILTERMAN (Middle East Project Director, The International Crisis Group): The United States initiated this war. Many people would argue this was not a war of necessity but a war of choice. So I think you cannot just say now the refugee problem is somebody else’s problem. It should be primarily an American problem.

SEELYE: The refugees should be cared for by their neighbors, says the Bush administration. Still, the White House has responded to pressure to do more. Last year the U.S. resettled just 202 Iraqi refugees. This year, the State Department has pledged to increase that number to at least 7,000.

Mr. HILTERMAN: That is a drop in the bucket, of course, because I think the U.S. does not want to acknowledge that there is a problem — that its undertaking in Iraq has essentially failed and is causing a refugee crisis in the region.

SEELYE: Hilterman says the U.S. should at least admit the refugees who worked with the coalition forces. That sentiment is shared in this household. Abu Yousef — not his real name — worked as a contractor for the American military in Samarra. He shows me several letters of recommendation from the U.S. Army.

ABU YOUSEF (Iraqi Contractor, reading letter): Abu Yousef is a friend to the coalition forces and [can] be counted on to do excellent work.

SEELYE: But because of that his life was threatened by Iraqi insurgents, so he fled Iraq with his family over a year ago. He says his money is running out, and he’s counting on the Americans to help him. 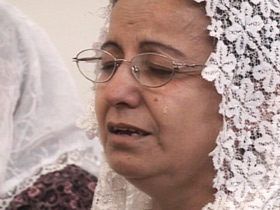 Mr. YOUSEF: Because I support them, I mean when there were black days for the military in Iraq, and I help them. Now I need them. I’m expecting them to do the same for me now when I’m now — need to be rescued.

SEELYE: The State Department has pledged to give special consideration to Iraqis who worked with the U.S., but Abu Yousef wonders when.

Mr. YOUSEF: The time is passing, and they are just, you know, conferences and, you know, media and newspaper. And we’ve got nothing, nothing serious.

SEELYE: At a church in Amman, Iraqi congregants pray for peace in their homeland. The Bush administration says there is a solution to the plight of Iraq’s refugees. Once law and order are restored in Iraq, the region’s four million displaced can return home. But many in this church don’t expect to go back any time soon. Some say they never want to. Their memories of Iraq are too painful. Many here say faith is keeping them going and the hope they’ll be given a chance to start new lives somewhere else.