BOB ABERNETHY, anchor: There’s a woman in San Francisco, Sara Miles, who used to be a journalist and an atheist. But she had a conversion experience and is now a leader in her church, where she feeds the homeless full-time. Lucky Severson reports. 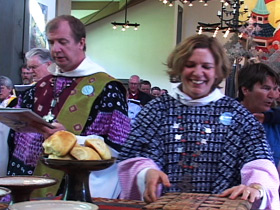 SARA MILES (Director, St. Gregory’s Food Pantry and Author, TAKE THIS BREAD): They’re members of the “Church of the One True Sack of Groceries.”

SEVERSON: The woman greeting everyone as if they are old family friends is Sara Miles. This is the same woman who spent most of her life as an avowed atheist and who is now running a church food pantry.

MILES: Church was not part of my family life, and I don’t think I ever expected to find myself being a Christian or, as I used to think of it, a “religious nut.” And again, I met plenty of Christians who I respected. But I think also I had this idea that Christianity was a religion that was kind of fundamentalist, kind of harsh, and more about setting rules of who belonged and who didn’t belong. 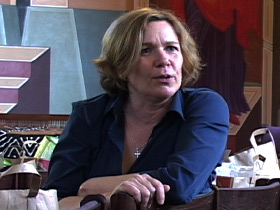 SEVERSON: She is the very same woman who as a journalist covered the 1980s wars in Central America up close where people were dying, and later became an editor for the left-leaning investigative magazine “Mother Jones.” It was after that that she found herself walking into St. Gregory Church.

MILES: I was just curious. I’m a reporter. I’m curious. I like to poke my nose in places, and I walked into this building thinking, “Huh, wonder what’s going on in there?”

SEVERSON: What Sara found was a church that offers Communion to everyone, including strangers.

MILES: And then a woman put a piece of fresh bread in my hand and gave me a goblet of some rather nasty, sweet wine. And I ate the bread and was completely thunderstruck by what I felt happening to me. So I stood there crying, completely unsure of what was happening to me. Got out of the church as quickly as I could before some strange, creepy Christian would try to chat with me, and came back the next week because I was hungry, and kept coming back and kept coming back to take that bread.

SEVERSON: Now she and her hearty band of volunteers collect five to six tons of donated bread and tomatoes and groceries every week, and then give it away. Many of these volunteers were once standing in the line themselves waiting for help. The priest at St. Gregory, Father Paul Fromberg, says many of them still need it. 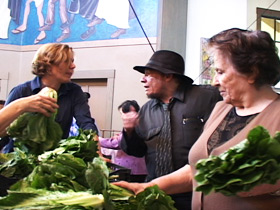 Father PAUL FROMBERG (St. Gregory of Nyssa Episcopal Church): A lot of people here are, you know, addicts that have overcome their addictions. They are people that have been locked up, people that are actually homeless, people that live in marginal housing. But it actually doesn’t matter where people come from because we’re not doing purity checks. You know, we’re not trying to say, “Are you good enough to be here?”

DAVID: This is my workout for the week.

SEVERSON: What do you do the rest of the week?

SEVERSON: Eduardo has been volunteering for eight months. 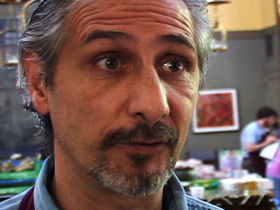 EDUARDO: I think it’s just fantastic. It’s a nice thing to do because it fills your heart.

SEVERSON: Mike gave up his heroin addiction in San Quentin prison and has been drug-free 14 years.

MIKE: The whole church and the whole ambience in this church — they’re the most easy-going people, and they don’t try to impose their belief on anybody else.

SEVERSON: The altar at St. Gregory’s is located in the middle of the chapel, accessible to everyone. The murals on the ceiling honor people of all faiths. On food pantry day, the lay preacher who was an atheist becomes a chef, something she was actually trained to be. She and Father Paul are elbows-deep in the kitchen preparing lunch and a show of appreciation for the volunteers.

Fr. FROMBERG: When I cook lunch for people, I do it because that’s what a priest does. A priest feeds people. And the delight that I take in it is the delight people have when they are able to eat together, sit down at a table with tablecloth and with real plates and real silverware. Like Jesus said, you will know me when you break bread together.

SEVERSON: After lunch, it’s time to get to work. Volunteers only let in a few from the line outside at a time, so these people in need won’t feel rushed or insignificant. The goal is to treat everyone with dignity. They feed as many as 500 families every Friday this way, but it’s more like a celebration than a handout.

Fr. FROMBERG: The Gospel is full of stories where Jesus is eating with inappropriate people. And in fact at one point in the Gospel, the critics of Jesus say the worst thing they can think to say about him, which is this man welcomes sinners and eats with them. 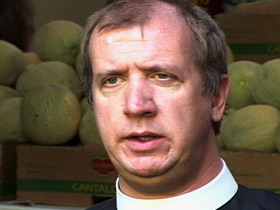 SEVERSON: God’s love, in Sara’s view comes down to one thing, feeding the hungry. Her mission and her faith always seem to reach back to that moment she first took Communion at St. Gregory.

MILES: I think what I discovered in that moment when I put the bread in my mouth and was so blown away by the reality of Jesus was that the requirement for faith turned out not to be believing in a doctrine, or knowing how to behave in a church, or being the right kind of person, or being raised correctly, or repeating the rituals. The requirement for faith seemed to be hunger. It was the hunger that I had always had and the willingness to be fed by something I didn’t understand.

SEVERSON: Since her conversion, it hasn’t always been easy. She’s lost some old friends who think she’s nuts. And collecting enough food for her growing clientele is a constant challenge. But she has not looked back.

(to Ms. Miles): You think you’ve found your calling?

SEVERSON: Sara Miles now has plans to put food pantries in schools and community centers. Her most recent book is about her transformation. It’s called TAKE THIS BREAD.