BOB ABERNETHY, anchor: Now, the messages of the advertising business. They help sell billions of dollars worth of products. But do they also coarsen American culture? And if so, who’s to blame — the ad agencies or us consumers? Lucky Severson has a report from Madison Avenue.

LUCKY SEVERSON: This is the annual One Show festival in New York, sponsored by the One Club, a nonprofit organization founded to uphold and raise creative standards in advertising. One commercial receiving top honors was an ad for Dove soap —an unusual attempt to broaden the concept of beauty. Mary Warlick is CEO of the One Club.

MARY WARLICK (CEO, The One Club): What Dove is doing, it’s showing that there are real people out there. Everybody is not a size 2. You can be beautiful in your own skin, and that’s a very, very important breakthrough. 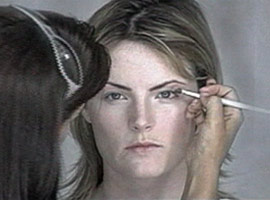 SEVERSON: Does this mean the advertising industry has turned a new leaf against creating unrealistic images of beauty? Does it mean less sex and violence in media and advertising? Keith Reinhard is the chairman emeritus of the giant ad agency DDB Worldwide, and he has a dim view of the trend of many of today’s spots.

KEITH REINHARD (Chairman Emeritus, DDB Worldwide Communications Group, Inc): We have elected to become a very crass and coarse society. So advertising is reflective of that, and it also influences and helps shape who we are. I think it works both ways. If advertising content and where it’s placed and how it’s placed are not in concert with where people are and how they think, it’s not gong to work.

SEVERSON: Reinhard is considered one of the giants in the business, the creator of some of the more memorable ads of our times. The “Whassup?” Budweiser commercials ran for five years.

Mr. REINHARD: In advertising beer, we are very careful not to target people who are below the legal age of drinking. We take the position that beer is not a bad thing when it’s used carefully, properly. We have another point of view on tobacco, which we won’t work for.

SEVERSON: Most Americans will remember the “You Deserve a Break Today” McDonald’s campaign. That was also Reinhard. 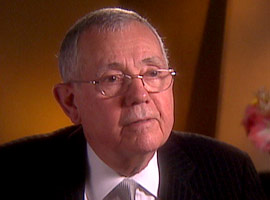 Mr. REINHARD: If you are not ethical in business, you will not survive —at least for long. There have been some commercials that later, when I had become head of the company, when I saw it I said I hope we didn’t do that. And in one or two cases it turned out that we did.

SEVERSON: Advertisers can get in trouble with the Federal Trade Commission if their ads are untruthful or misleading. But the lines are fuzzy, and commercial speech, even in bad taste, is protected by the First Amendment.

Of course just because something is legal doesn’t mean it’s ethical. Advertising Professor Meme Drumwright is with the University of Texas at Austin. She conducted a survey.

SEVERSON: Professor Drumwright says somewhere along the line many ad executives subordinate their ethics to the wishes of their clients. 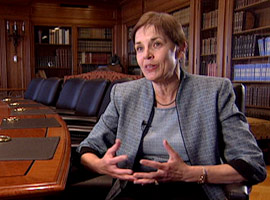 Prof. DRUMWRIGHT: You can rationalize, “Well, that the client should make the decisions. My job is to please the client.” There’s a tendency to compartmentalize, and again we see this in many businesses, where you have one set of values for your home and your friends and your family, and another set at work.

SEVERSON: It’s difficult to exaggerate the impact of the multi-billion-dollar advertising industry on our culture and the economy. But it’s the moral aspects, both bad and good, of advertising that concern Archbishop John Foley. He heads the Vatican’s Office of Social Communications, which has put out a document on ethics in advertising.

Archbishop JOHN FOLEY (Vatican Office of Social Communications): You know, the Church has been involved in advertising for 2,000 years. We call it evangelization. We really believe our message, and we offer much more than a lifetime guarantee.

SEVERSON: That little commercial aside, Archbishop Foley is quite serious about morality in advertising.

Archbishop FOLEY: We have three principles. One is truth: Always tell the truth. The second one is the dignity of the person, so don’t exploit people. And the third principle is the common good — that advertising should serve the common good. When there is advertising in the developing world where people cannot afford these products, they become resentful that they can’t afford these products. 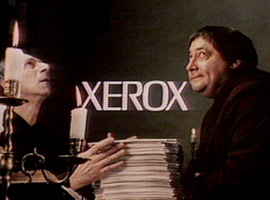 SEVERSON: He sees no problem in using religious imagery in ads as long, of course, as it’s done in good taste like the old Xerox monk ad.

Archbishop FOLEY: I think the Xerox monk could be classed among the creative, because monks historically did copying, the copying of scriptures, the copying of the great books in Western civilization.

SEVERSON: But according to the archbishop, there is simply too much sex in the media.

Archbishop FOLEY: There’s a great permissiveness and a great vulgarization of the media, which I think is very unfortunate. It seems to be taken for granted that individuals will have sexual experiences before marriage, and that troubles me.

SEVERSON: Archbishop Foley is also alarmed at the quantity of violence on TV and in TV ads. 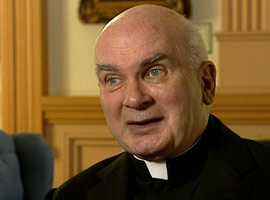 Archbishop FOLEY: In regard to explicit violence, I think it’s unfortunate, especially for young people who don’t have the power to distinguish and often seek to imitate what they see, and that can be very destructive for them.

SEVERSON: This well-received Coca Cola spot likely attracted viewers in part because of its adaptation on of a very popular, very violent video game. But Coke’s version leaves a positive message.

It seems that many of the most memorable ads are those that were built around smart humor, like this Berlitz spot.

The One Club also sponsors a pitch contest where advertising students try their powers of persuasion in front of people in the business. This year, a topic that wouldn’t have been considered 10 years ago: How to persuade individuals to fight global warming.

PATRICK MARAVILLA (Virginia Commonwealth University, speaking at presentation): So no one’s really talking to me, the average consumer. No one’s really saying this is what you can be doing to help.

Mr. REINHARD: When we are at our best we are not only lifting sales for the brands entrusted to us, but we’re also, I think, lifting the human spirit. We can use that influence to vulgarize, to brutalize society, or we can use it to lift it to a higher level. It’s our choice.

SEVERSON: In the future, Reinhard believes that TV commercials are going to have to be very creative to get people to watch, because with TiVo and other technology consumers can speed through the boring ones. But he is not optimistic that the current trend in both program content and advertising is likely to be reversed.