BOB ABERNETHY, anchor: For more than 200 years there has been a chaplain in both the U.S. House and the U.S. Senate. The tradition has been challenged by advocates of a strict separation between church and state, but the Supreme Court has upheld it, as long as the chaplains remain nonsectarian and nonpartisan. The current Senate chaplain is the Reverend Barry Black, the first African American and the first Seventh-day Adventist in the position. Kim Lawton reports.

KIM LAWTON: He has prayed with some of the most powerful people in the world. Chaplain Barry Black opens every session of the U.S. Senate with prayer and is often called upon to pray at important national events. It’s not mere ceremony, he says, but helping to set the spiritual tone of the country. 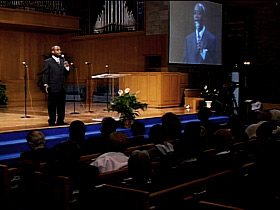 Chaplain BLACK (speaking at National Day of Prayer): More things are wrought by prayer than this world dreams of.

LAWTON: It’s a job that’s strictly nonpartisan and nonsectarian. As the 62nd chaplain of the U.S. Senate, Black not only ministers to senators and their families, but also to Capitol Hill staffers, service personnel, and police. He organizes many weekly Bible studies and offers private counseling.

Chaplain BLACK: As their pastor, I am interested in their spiritual well-being.

LAWTON: Fifty-eight-year-old Black is the first African American and the first Seventh-day Adventist in the position. He’s been there since 2003, but says he still marvels that this is where he’s landed, especially considering his background growing up in the housing projects of inner city Baltimore.

Chaplain BLACK (speaking to students at Andrews University): Night after night, the “hood” is a subculture of poverty and pathology. Domestic violence is a spectator sport. You can sit on your stoop and watch it.

LAWTON: In his book FROM THE HOOD TO THE HILL, Black vividly describes his youth: a rat- and roach-infested apartment; an alcoholic absentee father; and a struggling welfare mother often taking her eight children to church hungry.

Chaplain BLACK (speaking at book signing event): We were like hostages. When people would shake our hands and say “The Lord is good”—because my mother warned us you better not let anybody know you’re hungry—we were trying to let people signal, trying to let them know we’re captives. Somebody feed us, feed us, feed us. 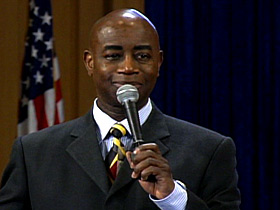 Chaplain BLACK: My mother was baptized when she was pregnant with me, and as she entered the—we say “the watery grave of baptism” (Seventh-day Adventists immerse), she prayed for a special anointing on her unborn child.

PASTOR PURNELL JONES : When Barry was in the womb she would always say, “I prayed for my son and that the Lord would anoint him.” When Barry came out, he was special. He was just special.

LAWTON: Berea Temple Seventh Day Adventist Church in Baltimore became an anchor for the family. Adventists are part of the evangelical tradition. They place a strong emphasis on Scripture, keeping Saturday as the Sabbath and often following Old Testament dietary laws. Black and his family came here virtually every Saturday.

Chaplain BLACK (to worship service): Because my father was not around a great deal, to have wonderful, positive male role models in the church was a tremendous blessing and made a critical difference in my development.

Chaplain BLACK: My mother gave my siblings and me our allowance based upon memorizing Scripture—a nickel a verse.

LAWTON: Purnell Jones is now an elder at Berea. He says as a kid, Black also had a gift for memorizing sermons and imitating pastors. 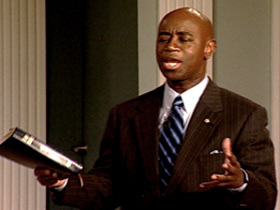 Mr. JONES: Barry’s mom had them take notes. So some of us got in the habit that we would even try to keep up with note-taking and see how much we remembered. Then we’d get outside, and there’s Barry, “blah-blah-blah,” just spieling it off, the whole sermon, and we’d say, “How in the world did he remember all this stuff?”

LAWTON: Today, Black loves to tell the story of when he was eight-years-old and his mother brought home a record with sermons by Peter Marshall, who was Senate chaplain from 1947 to 1949. Black says he listened to that record over and over again and learned the sermons by heart, accent and all.

Chaplain BLACK (speaking to students at Andrews University, imitating Marshall): “There were the aged, stooped with years, muttering to themselves as they pushed through the throng…”

LAWTON: As Black puts it, only God could have orchestrated events so that he would one day follow in Marshall’s footsteps.

Chaplain BLACK (speaking at Crystal Cathedral): God set in motion a sequence of events that let that little eight-year-old go from the hood to the Hill. So what a mighty God we serve.

LAWTON: Black went to Seventh-day Adventist schools, including Andrews University in Michigan. He eventually earned three masters degrees and two doctorates. He’s married with three sons. Soon after seminary, Black learned that the Adventists needed military chaplains, so he joined the Navy. He rose to the rank of rear admiral and was the first African American to be named chief of Navy chaplains. Black says he experienced some discrimination along the way, but he never let himself dwell on race.

Chaplain BLACK: I was determined to create a resumé that would transcend race, and I wanted an individual on a promotion board who may have even been socialized to think of me as inferior to look at my paper and basically say, “We’ve got a problem if we’re going to stop this guy.”

LAWTON: There’s been a chaplain in the House and Senate since 1789. Some argue that violates the separation of church and state, but Black insists it is constitutional. Although Seventh-day Adventists actively spread their faith, Black says he’s well aware of boundaries in his job. 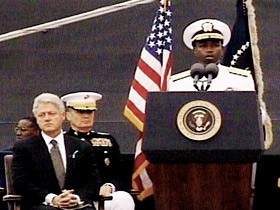 Chaplain BLACK: Having been a military chaplain in a pluralistic setting of religious diversity for 27 years, I am very, very comfortable with an environment where I am encouraged to support but not to proselytize.

LAWTON: He says he gets a front-row seat to history, and he’s been called on during times of national mourning, such as when Senator Edward Kennedy asked him to officiate during the at-sea burial of John F. Kennedy Jr. Senators come to him for counseling and advice, sometimes even on policy matters.

Chaplain BLACK: There are issues—biomedical ethical issues and issues of justice—that they are interested in: “Chaplain, what is your spin on this particular issue?” So I can tell them what I think, and of course they can use it however they desire.

LAWTON: It’s a lot of responsibility, and Black acknowledges that he must be on his guard to avoid becoming overly-impressed with the power. He says he works hard to maintain his moral authority.

Chaplain BLACK: Once people no longer perceive that you are the real deal, your power is gone. So keeping Chaplain Barry Black in the straight and narrow, ensuring that I don’t deviate from the path of unswerving integrity—that is my greatest challenge.

LAWTON: Black tries to keep his spiritual life on track by staying in regular conversation with God.

Chaplain BLACK (appearing on the Hope Channel): If you want to faithfully interpret the word of God, start praying the Scripture. It will energize your prayer life.

LAWTON: He prays with his well-used Bible open in front of him.

Chaplain BLACK: When you pray before an open Bible, you give God the courtesy of starting the conversation. And so I will open the Bible and I will read until something stops me, something impresses me, something warms my heart. And then I’ll talk to God about it.

LAWTON: Being Senate chaplain gives Black a lot to talk with God about. He often writes his prayers while looking out the window in his office—an everyday inspiration, he says, to pray for the nation.

FROM THE HOOD TO THE HILL: A STORY OF OVERCOMING by Barry C. Black