BOB ABERNETHY, anchor: For many physicians, there’s uncertainty about when or whether they should pray with their patients, but not for Mark Jacobson. He says it would be malpractice not to pray. Doctor Jacobson is a member of the Evangelical Lutheran Church in America. For 22 years, he’s been treating Africans in Tanzania, many of them Maasai tribesmen. Lucky Severson has the doctor’s story.

LUCKY SEVERSON: You might expect that a doctor like Mark Jacobson, educated at Harvard and Johns Hopkins Universities, would be at one of this country’s premiere hospitals. But there was something beyond medicine tugging the doctor in an altogether different direction. 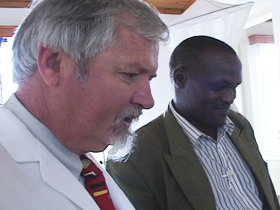 Dr. MARK JACOBSON (Director, Selian Lutheran Hospital): Early on in my faith life, I realized that I had been wonderfully blessed and that I had some responsibility and call to give some of that back to others.

SEVERSON: And so he and his wife ended up here in northern Tanzania on what has become for the doctor a lifetime medical mission.

Dr. JACOBSON: Only about once a day.

SEVERSON: It hasn’t been easy building a first-rate hospital in Tanzania out of what was once a tiny clinic. But his long struggle has convinced many here that Dr. Jacobson is more than just a healer.

LIVINGSTON LEKULE: Before I was really scared. But for that time he was just praying. Then, I feel something different deep in my heart.

SEVERSON: Some even consider him a saint.

TASHEEM AZECZ (Shop Owner): For us he’s been a miracle.

SEVERSON: The hospital he now heads is called Selian Lutheran, but it treats people of all faiths. 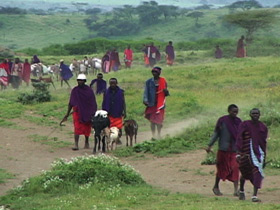 SEVERSON: The doctor is a serious student of science. He is also a man of deep faith, stronger now, he says, than before.

Dr. JACOBSON: As one looks at the human body and its ability to heal, I’m convinced beyond doubt of a greater power that has put us together. In this part of the world it’s so clear from the culture that I work in that God is a part of healing that it strengthens my faith greatly. We very intentionally join together in time of prayer and worship every morning. We call prayer our first medicine that we give each day.

SEVERSON: Many of his patients are Maasai tribe people who have steadfastly resisted the ways of the modern world, but they trust Dr. Jacobson.

Dr. JACOBSON: Locally, they’re looked down upon because they are still living as they’ve lived for hundreds and hundreds of years.

SEVERSON: Their traditions may be ancient, but Dr. Jacobson is convinced the Western world can learn from them.

Dr. JACOBSON: Even their definition of what it is to be healthy is partially spiritual. To be healthy means to be whole. It means to be in the right relationship with God and with others. We in the West have much to learn from a people who have such an integrated, holistic understanding of life and health. 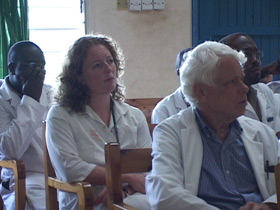 SEVERSON: Selian Lutheran is for those who can’t afford treatment at other hospitals. Almost all who show up here, especially the Maasai, are extremely poor.

Dr. JACOBSON: In the culture, the idea of something being free, given gratis, is associated with it being of no value, so that in Swahili the same word is used for something that’s free and something that’s worthless. So we want our care to be valued, and so we ask the families to contribute a little bit towards that.

SEVERSON: The hospital stays afloat because Dr. Jacobson is a world class fundraiser who has drummed up millions of dollars.

Dr. JACOBSON: This is Dr. Lynn Moshi, one of our interns. We frequently have medical students from all over the world, but I warn them. I say, “This can be infectious, and you may end up back here.”

SEVERSON: He has also attracted some of the top specialists in their field — doctors who can fix deformities like this boy’s club feet.

Dr. JACOBSON: He’ll go through a series of operations which will literally realign his gait, his foot, so that he’s got a much more comfortable walk.

SEVERSON: He’s treating these kids for a disease that has replaced polio as the leading cause of crippling in the area. It’s called skeletal fluorosis, and it’s caused by too much fluoride in the water, a condition that exists in some African countries.

Dr. JACOBSON: If you were having to walk four kilometers to get to school on legs like these, because they have many small fractures in them, it just hurts all the time.

SEVERSON: Dr. Jacobson perfected a surgical technique that makes it possible for these kids to walk again without pain. But the fluoride problem still persists in some villages, so he sends experts into these remote places to develop new water sources without fluoride, such as collecting rain water. Dr. John Laiser works for Jacobson. 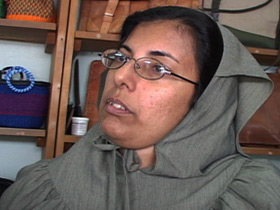 Dr. JOHN LAISER (Selian Lutheran Hospital): So when we came in here and we talked to these people, in the beginning they thought that maybe that had been bewitched by people. They thought that it was witchcraft.

SEVERSON: At least 30 kids from this village alone have been operated on for fluorosis; another 20 in a village over here. That means these kids could walk again or at least walk without pain. Doctors estimate that 500,000 kids in Africa are suffering from this disease.

Here in northern Tanzania, it seems that most everyone knows of Dr. Jacobson. This shop owner, who is Muslim, says the Lutheran doctor is a life-saver and man of God.

Ms. AZECZ: They always asked God to help them in the day-to-day work.

SEVERSON: Whether it was a Christian God or a Muslim God?

Dr. JACOBSON: Here in Tanzania, I would say it’s malpractice to not pray with your patients, because our patients understand that a good healer — a healer and a traditional healer for the Maasai — is both a healer and a priest, an intermediary between people and God. So there’s this image of the healer being the connection between the ultimate healing power and the patient. 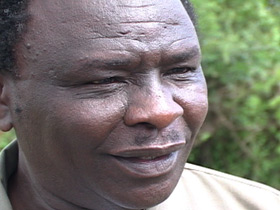 SEVERSON: There are some here who worry that the doctor, who has raised three daughters in Tanzania, will decide it’s time to move back to the U.S., where life will be more comfortable.

SEVERSON: There’s a new Lutheran hospital opening soon in the town of Arusha, one that wouldn’t be here if not for Dr. Jacobson, and there’s still so much to do.

Dr. JACOBSON: I have had so many confirmations of being where I’m supposed to be almost daily that this is a great place. This is where God wants me to be.