BOB ABERNETHY, anchor: There's an interpretation of Jesus' teachings that seems to be spreading fast, especially in many African-American churches, especially among the young. Critics call it the prosperity gospel and say Jesus never promised his followers that they would become wealthy. Proponents say they're just preaching what the Bible says. Deborah Potter has our story.

DEBORAH POTTER: It's Sunday morning at the Crenshaw Christian Center in Los Angeles, and the Reverend Frederick K.C. Price is preaching about abundance.

Reverend FREDERICK K.C. PRICE (Pastor, Crenshaw Christian Center, Los Angeles, during sermon): When you read that Jesus says I came that you might have life and have it more abundantly, what does "abundantly" say to you as an individual person? What?

CONGREGATION: A whole lot of stuff! 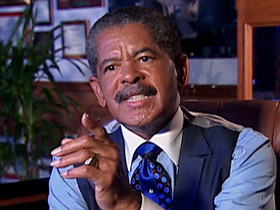 POTTER: Price, who leads a 10,000-member congregation, preaches that Christians who act as the Bible tells them, who are "doers of the Word," will prosper, and not just in the next life but in the here-and-now.

POTTER: The pastor points to his own wealth, including his luxury home and cars, as living proof that the message is true.

Rev. PRICE: I am one of the very few ministers that are very open, very, very open, because I don't have anything to hide. And I do it —I tell my people here all the time, "I'm only doing it so that you can see that there's somebody the same color that you are, breathing the same contaminated air, paying the same outrageous prices for everything else, and I'm prospering because of the Book."

POTTER: Other black megachurch pastors, like the Reverend Creflo Dollar of World Changers Church in Atlanta, preach a similar message. 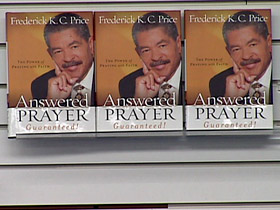 Rev. CREFLO DOLLAR (World Changers Church, Atlanta, preaching to congregation members): And now it begins to benefit you for the rest of your life.

POTTER: They belong to no denomination, but they do have a loose association. About 300 are members of a fellowship of inner city Word of Faith ministries, headed by Price, and they share an understanding of the life of Jesus that is at odds with what many Christians believe.

Rev. PRICE: Jesus had plenty, and then he was always giving to people, always giving to the poor, and so he had plenty from a material point of view. He was responsible for 12 grown men—their housing, their transportation, their food, their clothing—for a three-and-a-half year period of time. He had to have something. This concept of Jesus being physically poor is not biblically true; it's traditionally true.

POTTER: The Word of Faith message is drawing more and more followers from African- American communities like this one in Los Angeles where Price's church is based. But critics call it prosperity gospel, and they say it's a distortion of authentic Christian faith.

Rev. JEREMIAH WRIGHT (Pastor, Trinity United Church of Christ, Chicago): Jesus did not drive a Bentley, nor did he fly around in a Learjet.

POTTER: Jeremiah Wright is the pastor of Trinity United Church of Christ in Chicago.

Rev. WRIGHT: The Christian gospel has at its heart the caring for the least of these—those who are born with two or three strikes against them, who do not have the advantages that some, that a small percentage of society has. 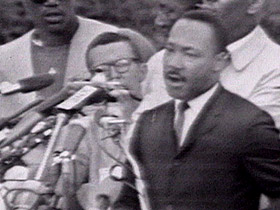 POTTER: The civil rights movement of the 1960s built on that message, sometimes called the Social Gospel, that dates back a hundred years. It emphasized the duty of Christians to reform society, and leaders in the black church, like the Reverend Martin Luther King Jr., preached that message, demanding justice and political equality for blacks.

POTTER: After King's assassination, a few black preachers took a different path. In the 1970s, televangelist Reverend Ike became famous for preaching prosperity. His slogan: "Don't wait for pie-in-the-sky by and by. Get yours now with ice cream on top."

REVEREND IKE (speaking before audience): I don't know exactly how many Rolls Royces have come into my experience, but 20 some so far.

POTTER: While many white preachers built huge followings by stressing prosperity, only in recent years have more black pastors shared the same message and seen their congregations and influence grow.

Professor MICHAEL ERIC DYSON (Georgetown University): One of the explanations for the exponential increase in the prosperity gospel is a way to justify black upward mobility and middle class existence without feeling guilty. The civil rights movement said, "You are responsible for your brother and sister. You ought to bring them along." The prosperity gospel says, "Your brother or sister is responsible for him or herself, and what they should be doing is praying right, so that God can bless them, too." 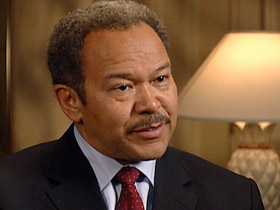 POTTER: Theologian Robert Franklin, the president of Morehouse College, argues in a new book that the black church today is facing a "crisis of mission:"

Dr. ROBERT FRANKLIN (President, Morehouse College and Author, CRISIS IN THE VILLAGE): I think two things are missing here. One is a personal ethic of sacrifice and of sharing and renunciation and of suspicion toward material things, and second, a holding of our economy and of our entire market sector accountable for the well-being of the poorest of the poor in our nation.

Bishop T.D. JAKES (Pastor, The Potter House, Dallas): I don't think there is any such thing, truly, as prosperity gospel. It's just a tag that we put on an extreme point of view.

POTTER: Bishop T.D. Jakes, who has made millions from his books and CDs on self-empowerment, says the black church needs to change with the times.

I'm not against marching, but in the '60s the challenge of the black church was to march. And there are times now perhaps that we may need to march. But there's more facing us than social justice. There's personal responsibility, motivating and equipping people to live the best lives that they can really does help them to live the scriptures and to bring them to life. 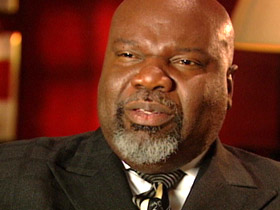 POTTER: Jakes's church in Dallas, The Potter's House, and other black megachurches do extensive outreach to the poor, and they teach financial responsibility. But critics say that's not enough.

Dr. FRANKLIN: Many of the churches that I'm familiar with are certainly very diligent in their charitable giving in communities and in their efforts to sort of share their message and outlook. But, again, the other side of that is the role of the church as a prophetic force in society, amplifying the voice of the poor and the voiceless, and it's that justice note that's missing in much of the prosperity gospel appeal.

POTTER: At Price's church in Los Angeles, members say the message has worked for them.

ALOGHOSA OSASERI (Congregation Member, Crenshaw Christian Center): I believe that it's an important message for young people that we can prosper right now. We don't have to wait, you know, 'til we're 40, 50 or 60. Why?

LAURIE DREVLOW (Congregation Member, Crenshaw Christian Center): I was living on about $500 a month for about 10 years, and now my tithes and my offerings in a month are well over and above what I used to make in a month.

POTTER: The central message these followers hear is not the once-traditional call to work in this world to establish justice for all. Their core belief is that God does not want anyone to be poor.

An interpretation of Jesus’ teachings that emphasizes wealth and prosperity seems to be spreading fast, especially in many African-American churches. But critics are calling the “prosperity gospel” a distortion of authentic Christian faith.