BOB ABERNETHY, anchor: There is still no generally agreed figure on the human cost of September's crackdown in Myanmar on Buddhist monks and others protesting dictatorial rule. The military government says ten people were killed and nearly 3,000 detained, of whom most have been let go. But diplomats and other observers say the death toll is much higher. We have a report today from Lucky Severson on Myanmar refugees in Thailand describing what happened to them and what the likely consequences may be of the persecution of the monks.

LUCKY SEVERSON: The exodus from Myanmar, formally and more widely known as Burma, continues. Here, it's across the Moei River on the Thailand border. For such a closed country, crossing the frontier in this area seems surprisingly easy. Inside Myanmar, it's a different story. Hlaing Moe Than said he had to sneak through 21 military checkpoints before he finally made it out a few days ago. Moe is a dissident leader who has been imprisoned twice and tortured.

HLAING MOE THAN: They treated me very cruelly and very brutally. I was beaten many, many times in the prison for no apparent reason.

SEVERSON: Bo Kyi heads a political prisoners association. He says there are at least 2,000 Burmese who took part in the September uprising still in prison, and about half of those are monks. That doesn't count the thousands of citizens already locked up.

BO KYI: They beat monks and then they torture monks. They did many, many mistakes but this mistake is really, really big one. 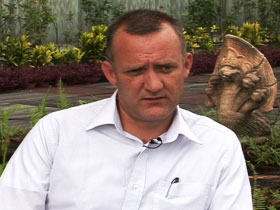 DAVE MATHIESON (Human Rights Watch): Most people in the country never liked the army to start with.

SEVERSON: Dave Mathieson is with Human Rights Watch, and he says the protests that resulted in a military crackdown may ultimately bring down the military.

Mr. MATHIESON: And now they certainly hate them for what has happened. These were very serious developments.

Mr. MOE THAN: The monks are in the higher level, over the people, you know. In our religion, we have three treasures: Buddha, the Buddha speech, and the monks.

SEVERSON: So when security forces attacked monks, it was the same as attacking Buddhism itself.

Mr. KYI: Therefore, many people, the majority of the people involved believe they will go to hell when they die.

SEVERSON: The military has kept a tight grip on the country since it mounted a coup in 1962. In 1988, the generals killed thousands when they snuffed out a democracy movement and arrested its leader, Aung San Suu Kyi. She's been kept under house arrest for most of the years since, while her countrymen suffered in silence.

It's a powerful army, over 400,000 soldiers. That's about the same as the number of monks who serve in a wonderland of pagodas and temples. About 80 percent of the 42 million citizens are Buddhists, and virtually every young man serves some time as a monk. Buddhism in Burma is more than a religion. It is a revered way of life. One of its principles is that suffering is necessary part of life. The military, under the generals, have caused ample suffering, or as the Buddhists call it, "dukkha." 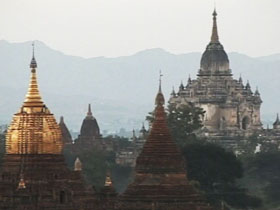 The Orwellian atmosphere is one example. Regime spies are everywhere, especially in the numerous coffee shops. Citizens cannot travel within the country without official permission. The government controls almost every aspect of life.

The military has embarked on a major road building project and has been accused of using slave labor to do their work. There is a tenet of Buddhism called "dana," which is the act of giving without getting a reward. The generals say their unpaid workers have simply been practicing dana. Soldiers have also driven thousands of families, many of them Christian, from their villages into the countryside, where there is little food and shelter and no medical care.

In order to legitimize their rule, the generals told the people they were there to protect Buddhism. They built many new pagodas and gilded old temples. They also lavished money and perks on leading monks.

Mr. MATHIESON: There's been a major process in the last 19 years to basically buy off and purge the senior leadership of the monks -- to actually put in "yes men" and people who are very close to the military.

Mr. KYI: They want to use monks for their power.

SEVERSON: There are no teachings in Buddhism about how to revolt against unjust rulers. But the monks are the only institution in Burma influential enough to challenge the military. 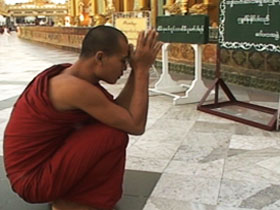 SEVERSON: The monks themselves have long been divided over the role they should play with regard to the military. Some believe in a monastic quest for enlightenment or nirvana through meditation. Others are motivated by Buddha's decree to "wander for the welfare of the many." It was the welfare of the many that eventually sparked the protests in Rangoon. This monk should know. He was there. To protect himself, he asked us to hide his identity.

He says his country was becoming poorer and poorer, and the monks could no longer ignore the situation. Also, the monks themselves were getting hungry. And in a country where two out of five children under the age of five are malnourished, pictures of Senior General Than Shwe's daughter's lavish, diamond-studded wedding did not go down well.

Mr. MATHIESON: There is his daughter dripping with diamonds and jewels from her rings and this huge reception in Rangoon. That infuriated a lot of average people because it really did show that this is a privileged class.

SEVERSON: The last straw was when fuel prices practically doubled overnight. Not long after, students hit the streets. Then the monks joined in and began to lead the protests. People got angry when security forces treated the monks with cruelty.

A few days later, Burmese television showed a huge rally in support of the military. But most of those people showed up to avoid paying an 80-cent tax which they would be forced to pay if they didn't show up, according to Dave Mathieson with Human Rights Watch.

Mr. MATHIESON: And these mass rallies that they have are really meant to impress the rest of society. But also, I think, in a very clumsy way they're meant to impress international opinion that, you know, here is this mass support for military rule. And most of the people I've spoken to that go to them just say, you know, it means we don't have to pay not to go. 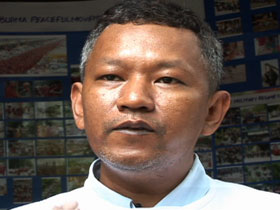 SEVERSON: Monks here are attending a birthday party for a dissident who is now in prison. His name, literally translated, means "conqueror of kings." The mug shots, and there are many, tell of other Burmese who are imprisoned. Moe Than says the generals will suffer a worse fate.

Mr. MOE THAN: They go to hell surely. The worst hell in our religion we call a "wha zie" -- the worst hell.

Mr. KYI: They have the power to teach the government how to live, how to rule the country. Also, according to the Buddha doctrine, also they have to follow some principles: not to torture to anyone; not to lie. Also to love the people, to give loving kindness to others. If they follow Buddha doctrine, the country will be at peace.

SEVERSON: But convincing the military to love the people may be a hard sell.

Mr. MOE THAN: We have already determined to increase our peace protests until we are a success. So the world will see more bloodshed in Myanmar, and the West will hear more and more sorrowful stories.

SEVERSON: If the regime is thrown out, most observers say it will be because of what they did to the monks.

There is no generally agreed figure on the human cost of the crackdown in Myanmar on Buddhist monks and others protesting dictatorial rule. The mass exodus from the country, formally and more widely known as Burma, continues.