KIM LAWTON, guest anchor: Mitt Romney’s campaign advisors had been debating for months about whether the candidate should give a frank speech about his Mormon faith. On Thursday (December 6), Romney made that speech. At the George Bush Presidential Library in College Station, Texas, Romney said he would be true to his Mormon beliefs, but his presidency would not be dictated by them.

MITT ROMNEY (Republican Presidential Candidate): I will put no doctrine of any church above the plain duties of the office and the sovereign authority of the law.

LAWTON: Romney also criticized what he called “the religion of secularism” that is trying to push religion out of American public life. Many experts believe the speech was designed to reach out especially to evangelicals who may be uncomfortable with the idea of voting for a Mormon. 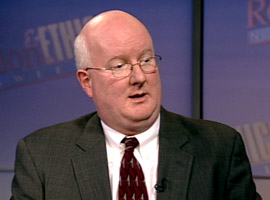 Joining me now is Shaun Casey, associate professor of Christian ethics at Wesley Theological Seminary in Washington and the author of a book coming out next year about religion and John F. Kennedy’s 1960 presidential campaign. Casey is also an advisor to Senator Barack Obama’s campaign.

Shaun, did Mitt Romney’s speech this week reassure evangelicals and others who might have had concerns about the notion of a Mormon president?

LAWTON: Well, I wanted to ask you about Kennedy’s speech, but first let me just ask you what was it in the speech that maybe didn’t satisfy the rank and file evangelicals? 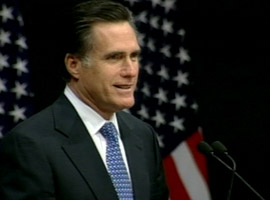 Dr. CASEY: I think there was one particular dramatic moment when he talked about the question he gets asked about: Who is Jesus and what does he think about him? He gave a great answer in terms of evangelicals where he said Jesus is Lord and Savior of mankind, son of God. But then he said Mormon doctrine essentially differs from there about who Jesus Christ is — from evangelical doctrine. I think a lot of evangelicals at that point left very, very troubled.

Dr. CASEY: Well, in the current ethos, the current age, particularly in the Republican Party over the last eight years, it’s been fairly essential that a candidate demonstrate that they are theologically orthodox from a conservative Protestant perspective, and that answer didn’t meet that standard.

LAWTON: Was it a “Kennedyesque” speech? Was it the same thing that Kennedy did when he talked about his Catholicism?

Dr. CASEY: It was similar. I mean, the environment is different, but both were responding to external political forces. Neither candidate wanted to give the speech at that time, but both had to because an opponent was forcing them to that position. Kennedy talked more about separation of church and state, because that was the attack that was launched against him. Romney’s problem is different in the sense that people see his Mormonism as exotic or esoteric, and he has to knock that down without being too explicit about what Mormon doctrine really is.

LAWTON: So, very quickly, what will voters take away from this when they head to the polls?

Dr. CASEY: I think in Iowa he’s still in trouble. I think Mike Huckabee has overtaken him among evangelicals. I don’t think this speech changed that trend.

LAWTON: Okay, we’ll leave it there. Shaun Casey, thank you very much.