BOB ABERNETHY, anchor: We have a report today about one of the most prominent pediatric neurosurgeons in the world: Dr. Ben Carson. He’s probably best known for his surgeries to separate conjoined twins. Carson talks about his work and his Seventh-day Adventist faith in a new book out this month called TAKE THE RISK. Kim Lawton reports.

KIM LAWTON: Ben Carson knows a lot about risk. As one of the leading pediatric neurosurgeons in the world, Carson makes life and death decisions nearly every day, and he has gained international fame for his work separating twins joined at their heads. Carson believes risk can be a good thing. But he says most Americans are obsessed with security.

LAWTON: Carson is a committed Seventh-day Adventist. He says when he makes his own risk assessments, he seeks guidance from God.

Dr. CARSON: I pray before I go into the operating room for every case, and I ask him to give me wisdom, to help me to know what to do — and not only for operating, but for everything. 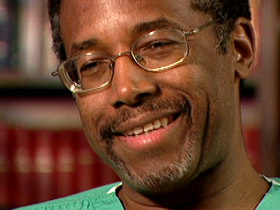 LAWTON: Faith and risk have defined Carson’s life, both personally and professionally. He directs pediatric neurosurgery at the Johns Hopkins Medical Institutions in Baltimore, Maryland. In addition to his work with conjoined twins, Carson has pioneered surgical techniques to stop seizures. Not bad for a kid from inner-city Detroit whom many people would have written off.

Dr. CARSON: I was definitely an at-risk kid growing up. You know, my parents got divorced early on. My mother only had a third-grade education, was illiterate, worked as a domestic two to three jobs at a time because she didn’t want to be on welfare. I was considered the dummy in the classroom when I was in 5th grade, and I just didn’t believe that I could do the work, so I engaged myself, you know, by creating disturbances.

LAWTON: His mother, Sonya Carson, prayed for wisdom on how to help her two sons. She mandated that they write two book reports a week for her.

Dr. CARSON: Not knowing she couldn’t read, I mean, she would highlight and checkmark and stuff, and we’d think she was reading them. But she could always discuss them with you. She said, “Let’s talk about your book report.” It only really took a month maybe before I started to enjoy the reading. Something happened. I got to the point where I couldn’t wait to get home and read my books.

LAWTON: He began seeing a future for himself. But Carson says he faced another challenge — his explosive temper. He was often getting in fights. Then, when he was 14, he tried to stab a friend but the knife blade hit the boy’s belt buckle. 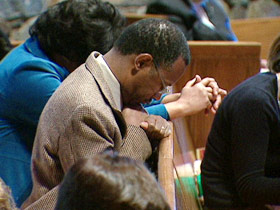 Dr. CARSON: It dawned upon me at that moment I was trying to kill somebody over nothing, and, you know, I locked myself in the bathroom and I just started thinking about it and I said, you’re not going to accomplish your dream of becoming a doctor; you’re going to end up in jail or reform school or dead.

LAWTON: He says he prayed for God’s help and then picked up a Bible, which opened to the Book of Proverbs and verses about anger. He believes God took away his temper and enabled him to become a surgeon. Carson still reads from the Book of Proverbs every day. He says it is part of his spiritual preparation for surgery.

Dr. CARSON: My strong belief is that God created human beings and therefore he knows about every aspect of the human body. So if I want to fix it, I just need to stay in harmony with him.

LAWTON: For Carson, surgery is often a spiritual experience.

Dr. CARSON: When I look at the human brain I’m still in awe of it. Every single time you lift off the bone and open the durra, and there it is, the human brain, the thing that gives a person a personality, that distinguishes each one of us. I don’t particularly like, you know, cutting the brain. It’s such a beautiful thing, why cut it? And I’m not even sure I like surgery. But I like what it does.

LAWTON: Seeing the mechanics of the body, he says, has taught him about the non-tangible aspects of life.

Dr. CARSON: We are more than just flesh and bones. There’s a certain spiritual nature and something of the mind that we can’t measure. We can’t find it. With all our sophisticated equipment, we cannot monitor or define it, and yet it’s there. 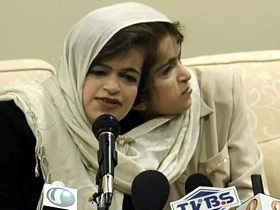 LAWTON: Carson has had many high-profile cases. In his new book, TAKE THE RISK, he describes one of the toughest decisions of his career. In 2003, he was asked to be part of a surgical team trying to separate 29-year-old Iranian twins whose skulls were fused together. The surgery had a less than 50 percent chance of success. Carson was reluctant, but then he met Ladan and Laleh Bijani.

Dr. CARSON: They said, “Doctor, we would rather die than spend another day together.” And, you know, that kind of takes you aback. But then I put myself in their place and I said what if you were stuck to the person you liked the most in the world 24/7 and you could never get away from them for even one second? And I realized what they were going through.

LAWTON: He ultimately decided to be part of the controversial surgery, which took place in Singapore.

Dr. CARSON: It became very clear as time went on that they were going to go through with the operation whether I helped or not. So at that point, you know, I started thinking there’s not a very good chance of success here, so I’d better go and help, because if they die I’m going to wonder for the rest of my life if it could have turned out differently if I would have helped.

LAWTON: Despite his help, after more than 50 hours of surgery Ladan died, and then Laleh died 90 minutes after that. 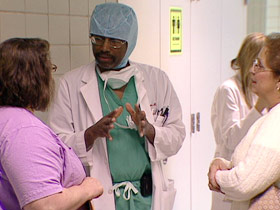 Dr. CARSON: I always say if God didn’t allow any bad things to happen, we would already be in heaven, and we are not there. That’s where trust and faith comes in. You just say, “Lord, I don’t understand it. But one thing I do know is that you understand it and that you are in control and I trust you.” And that’s the end of the story.

LAWTON: At 56, he says he has seen many miracles, too. It’s tough to keep up with him as he visits his many patients in the pediatric intensive care unit. His staff calls this the “lightning rounds.” And despite the pace, there’s always time for a personal word with the patients and a hug from grateful families. And he has been forced to face his own mortality. In 2002, he was diagnosed with prostate cancer. After treatment, Carson says he’s now cancer-free.

Carson tries to have an impact outside the operating room. In 2004, he was appointed to the President’s Council on Bioethics, and Carson has become a vocal advocate for health insurance reform.

Dr. CARSON: I see the insurance issue, the coverage of people for health care in our country, as a huge moral issue. And, you know, for the richest country in the world to have 47 million people without health insurance is ridiculous.

LAWTON: One of Carson’s greatest passions is encouraging education, especially for at-risk kids. He and his wife have started a national scholarship program called the Carson Scholars Fund.

LAWTON: He admits one big danger for neurosurgeons can be developing a God complex.

Dr. CARSON: You’re going into these incredibly delicate places that control who people are, and you’ve got to have a fair ego to think you can do that. But for me personally, I realize where it all comes from. All the good things come from God. I can’t really claim any of them, and I just feel privileged that I was dealt a measure of the healing arts.

LAWTON: Faith may be a risk, he says, but it’s the best risk of all. I’m Kim Lawton in Baltimore.