KIM LAWTON, guest anchor: The rights of the homeless have become an ethical issue in the glittery playground that is Las Vegas. Advocates say police are harassing the homeless because they're seen as bad for business. City officials say that too many of the homeless just don't want to be helped. Lucky Severson reports. 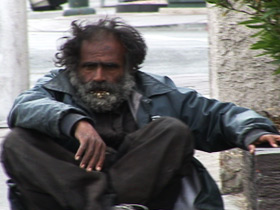 SEVERSON: A city of conspicuous consumption and private misery.

CODY HUFF: When you're out here, nobody knows your name. Nobody cares about what you do or if you die or whatever. They don't care.

GAIL SACCO: Las Vegas is known throughout the world. It's one of the richest cities in the world. There's no reason at all why we should have this many people on the streets.

OSCAR GOODMAN (Mayor, Las Vegas): When I walk amongst them, they're very nice. When I offer them the opportunity to get a ticket home, they turn it down.

SEVERSON: No one knows for certain just how many homeless wander the streets of Las Vegas. Estimates range from 10 to 20,000 and all agree that the number is growing.

LEE ROWLAND (Attorney, ACLU, Nevada): But I can assure you they don't come here because it's a city that's friendly toward the homeless, unfortunately.

SEVERSON: Lee Rowland is the attorney for the ACLU of Nevada, which has filed several suits against the city's policies regarding the homeless. One in particular in 2006, made it a crime to feed the homeless in a city park, punishable by a fine of up to $1,000 and or six months in jail. That ordinance was eventually found unconstitutional.

Ms. ROWLAND: What has been going on is a concerted attempt to keep disfavored, certain disfavored people out of public parks and reserve them for the use of other people with more means and political power and that's fundamentally wrong. It's unconstitutional.

Mr. HUFF: I've been through every shelter and everything in this city to help people and I didn't get any help from anybody, okay, until I went to church.

SEVERSON: Cody Huff was himself, homeless, after getting out of prison for drugs and crime. Now he has a successful business coordinating freight shipments for Las Vegas conventions. Now he hands out McDonalds food certificates. 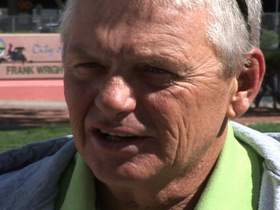 Mr. HUFF (to homeless people): We love you guys, man -- we're trying the best we can.

I always tell people don't give homeless people money, because they're either going to buy drugs, alcohol or gamble with it, but if you give them a McDonalds' gift certificate for $5 they can go get a really good meal for that.

(to homeless people): Have you guys run into any church groups out here -- the people that feed you? Thank God for those people.

Ms. SACCO (to homeless people): Okay, I got more in the car. Okay, there's bananas and apples. Take whatever you need.

In the Bible, there's at least 300 verses that tell -- that God tells us to take care of the poor.

SEVERSON: Gail Sacco and Cody Huff were the primary targets of the city's ordinance prohibiting feeding homeless in parks. This park is right across from city hall. 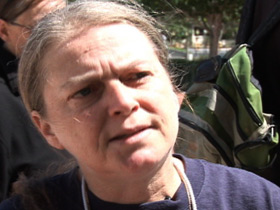 Ms. SACCO (giving food to homeless): So, if we run out of this, I got more.

Mayor GOODMAN: If they want to feed the homeless, let them go to the Salvation Army and participate in the feeding process. Let them go to Catholic Charities and dish out the food. They should have just as good a feeling. But to go into the park? That stops these folks from going into the professional services where they have a chance to come back into the community.

SEVERSON: But many homeless say they don't feel safe in shelters. They don't trust city government.

Mayor GOODMAN: Anyone who has any sensitivity at all, they want to help their fellowmen. And my frustration is with the ones who don't want to be helped. The ones who don't know that they should be helped. We help everybody else. I don't have a guilty conscience.

Mr. HUFF (pointing to sleeping homeless): Okay, so there's your mayor helping. Okay, you can ask anybody in this park, they'll tell you the same thing. You know, the mayor -- the city doesn't do anything to help these people. All they do is round them up and put them in jail.

SEVERSON: It was a complaint we kept hearing from the homeless -- that the police were constantly harassing them.

Mr. HUFF: They give these guys tickets for jaywalking or whatever and then it turns into a warrant and then they put them in the Stewart Mohave jail.

UNIDENTIFIED MAN #2: Now they're not even giving tickets, they're taking us straight to jail.

UNIDENTIFIED MAN #2: They took me to jail from Sunset Park the other day because it's against the law to sleep -- to lay down and take a nap in a park.

Mr. ROWLAND: Most homeless individuals spend their day running from the police and that starts at four a.m. with those homeless sweeps in the downtown quarter and it continues all day. And there is a constant effort to criminalize the aspects of homelessness that really can't be helped, such as arresting people constantly for misuse of a bus bench -- that's basically sitting down on a public bench when you don't have 90 cents for bus fare.

SEVERSON: But the city says the homeless need to obey the laws just like everyone else. This is City Councilman Gary Reese, also a barber. 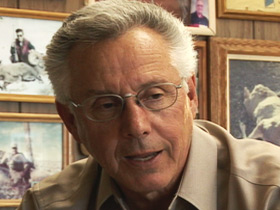 GARY REESE (City Councilman, Las Vegas): If people are doing something that they shouldn't be doing whether it's me or you.

SEVERSON: Sleeping on a park bench in the middle of the day?

Mr. REESE: Well again, I can certainly appreciate that but is that what a park bench is designed for?

Mr. ROWLAND: No one is arguing that homeless individuals have the right to break the laws in the park. They don't. Simply no one has said that. And what I do know is, that by creating a sense of community, by sharing food with these individuals, I believe that people like Gail Sacco have made that criminal behavior less likely.

Ms. SACCO (to homeless people): And try not to fight.

SEVERSON: The city originally drew up the feeding ordinance after neighbors of this park, now closed, complained that the homeless had taken over.

Mr. REESE: You can't tell whether a homeless person is drunk, whether he's on drugs or whether he's mentally ill. If you're over there with your kids and they kick a soccer ball and it rolls over there and hits this guy on the foot, wouldn't that scare you if you went over there to get your soccer ball and you didn't know what they guy was going to do to you?

SEVERSON: Las Vegas is not the only city making it a crime to feed the homeless. Orlando, Dallas, Fort Myers, Florida, and other cities are using similar ordinances or considering them. As with Las Vegas these statues will likely be tested in court.

Las Vegas is among several cities, particularly in the warmer climates, that face an increasing homeless population. It's a dilemma especially because, and authorities agree, many of these lonely figures should be in mental institutions or out-patient clinics.

Mr. HUFF: I would say right around 25 percent of them are just kind of beyond help. I mean only God can help them. 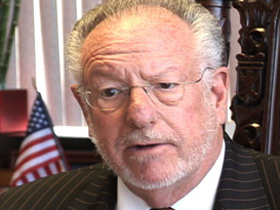 Mayor GOODMAN: As for the service resistant, forget about it. There's no way in the world. I'd like to run them out of town to be honest with you.

Mr. REESE: How do you give a job to somebody who doesn't want a job? Now they can say a lot of things.

SEVERSON (to Mr. Reese): Do you have a jobs program for them?

Mr. REESE: Absolutely. Yes. And again, the mayor at our city hall council meetings, when we have homeless people come there to complain and stuff. We have staff to go down there and ask them, "Do you need help? Do you want help?" I think we've had -- the figures probably aren't accurate -- 21, 23 something like that, that we've offered this help to. You know how many has taken it? Two. And do you know how long they lasted? Just long enough to get downstairs.

Mr. HUFF: You know, that's a big fallacy that these guys don't want to work. The largest percentage of the guys out here will work in a hot second if you've got a job for them. We just did a convention a week ago. I took 14 "homies" to the Sands Hotel and the people who hired them were coming up to me going, "My God Cody, these guys work harder than anybody we've seen out here."

SEVERSON: Meanwhile, the city says it plans to introduce a new feeding ordinance the courts will uphold.

Ms. ROWLAND: Las Vegas is a complex city. We are completely dependent on tourism, and we are dependent on an image that we sell to the tourists who come here. And clearly when your economy is based on the functioning of gambling of casinos and of the tourist industry, a visible face of poverty is not something that's good for business.

Mayor GOODMAN: We're in a balancing act here. This isn't just a one way street to take care of the homeless. The homeless are part of the community. But, I've got residents who live in our community whose quality of life has been destroyed in part.

SEVERSON: It's a balancing act between the needs of the homeless, the conscience of those who want to feed them, and the wishes of others who just don't want them around.