BOB ABERNETHY, anchor: This weekend (April 19) the Jewish holiday of Passover begins with its Seder meal — special food and the retelling of the story of the Jewish Exodus from slavery in ancient Egypt.

There’s a couple in Roseland, New Jersey, Murray and Randi Spiegel, who invent each year new ways to dramatize and sing about the traditional story. They’ve become so good at it and have so much fun there’s now a waiting list of their friends who want to come.

MURRAY SPIEGEL (Author, “300 Ways to Ask the Four Questions,” dressed as Moses speaking to Seder guests): Hear ye, hear ye, children of Israel. We must set out into the desert on a historic journey. This is a journey that is going to be told for thousands of years. Let’s bring a map. Yes, let’s bring a map. 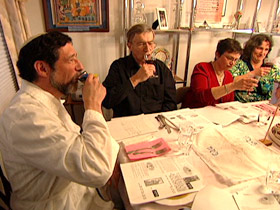 Well, my intention was to have something that would always be something fresh and exciting for people.

Mr. SPIEGEL: …and to recite psalms of praise.

Mr. SPIEGEL: But the embellishments can take place and the creativity that each individual family would like to go through is under their own determination. 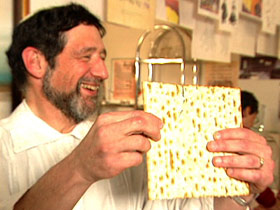 (Praying during Seder meal): At this Passover table tonight we celebrate freedom and redemption. Once we were slaves. Now we are free. Next year may we all be free, all peoples.

The afikommen is one half of the piece of matzah that’s broken. The piece that is broken is hidden away, and the children or the adults can go out to find it later on.

The four questions is something that’s really interesting because they’re a highlight of the Seder. And so what we’ve done is we’ve published a book that is a collection of translations of the four questions.

(Speaking to Seder guests): “Why is this night different from all other nights?”

Mr. SPIEGEL (holding up semaphore before seder guests): Around the room — Hebrew semaphore. 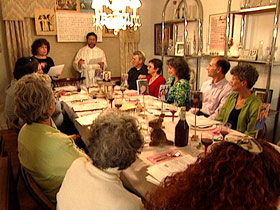 RANDI SPIEGEL (performing rap parody): Gonna tell you all a story ’bout the Jews in Egypt. They had a good thing going, there was no complaint. But then there came this Pharoah who was mean and nasty. He worked them night and day, from the heat they did faint.

Mr. SPIEGEL: (performing rap parody): They pleaded unto God, “Save us all your children.” And God looked unto them. He was quite distressed…

SEDER GUESTS: (reciting plagues, in English and Hebrew, as they pass toy animals around table)

Mr. SPIEGEL: The final plague is the killing of the first born. 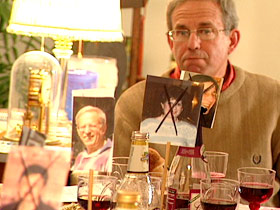 The first born of this group have an “X” through them, so this shows what a devastating tragedy it would be for any community to lose all of their firstborn. We never laugh at our suffering. We never laugh at this. But we try to make it more meaningful.

Mr. and Mrs. SPIEGEL (performing a Mozart song parody): Death appeared at their door, and every first-born in Egypt died, including Pharoah’s favorite child. The Jews all followed Moses. They made a swift departure.

Mr. SPIEGEL: We’re having an afikommen race, and so some of the people are trying to solve a puzzle associated with a clay tablet that has the hieroglyphics on it, and the other set of people are trying to find the afikommen and the various hints that we have hidden inside of fakes, so it’s a little bit like a wild goose chase.

ABERNETHY: Murray Spiegel is also the author of a book about the Seder: “300 Ways to Ask the Four Questions.”