In accordance with UN Security Council Resolution 1973, Operation Odyssey Dawn was launched on March 19, 2011. A combined military effort of American, British, French, Italian, and Canadian forces, this military operation has two purposes: protect civilians and civilian-populated areas (especially those under control of rebel groups) and create a no-fly zone by taking out all of Libya’s air defenses. The military effort is led by US commanders both in Washington and on ships in the Mediterranean. 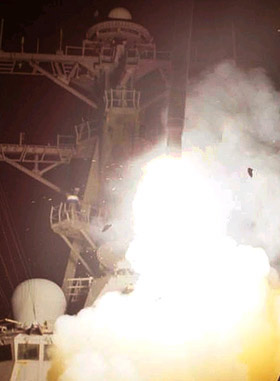 In the UN resolution and in much of the debate leading up to the launch of the operation, the word “responsibility” has been in the air. The popularity of this term goes back to 2001, when a Canadian commission proposed the idea of a “responsibility to protect” as the framework through which debates about humanitarian intervention and human rights should be understood. In 2005, the UN General Assembly proposed the concept as part of its reform of the UN system in order to avoid politicking over matters that demanded immediate action. Since then, it has been invoked not only by academics, but also by policy makers and even military officials in support of various interventions in support of human rights.

“Responsibility” is not just a legal term, but a moral one as well. Indeed, some analogue of the term is central to philosophical and religious traditions around the world, including the just war tradition. The idea is linked to concepts such as duty and obligation, although there are some crucial differences, according to some philosophers.

What does it mean to say we have a responsibility to others? In one morally extreme version, responsibility means having to care for the ills of all people. Especially when one is powerful and can provide aid to many around the world, this notion of responsibility becomes more resonant. The just war theorist Jean Bethke Elshtain has referred to it as the “Spiderman Ethic”: for those with great power comes great responsibility.

One response to this might be to say that no matter how powerful, no one state or coalition of states can be responsible for all the problems in the world. The 2001 report on the “responsibility to protect” recognized this when it proposed an overlapping set of responsibilities, starting with the responsibility of the state to protect its own citizens, which then expands out to the larger international community when the state cannot or will not aid its own citizens.

But there is perhaps another way to think about responsibility, one that helps us better understand what is happening in Libya and that might be more relevant for the future. The Lithuanian Jewish philosopher Emmanuel Levinas famously proposed an “ethic of responsibility.” Educated as a Talmudic scholar, but one who influenced French philosophers such as Jacques Derrida, Levinas argued that responsibility does not mean having a duty to solve the problems of the world. It is really about recognizing other peoples and communities as unique and worthy of respect in their own right. This recognition means challenging assumptions about oneself and one’s certainty about the rightness of one’s own cause.

Levinas was not proposing simple hand-wringing about one’s own sins or faults, nor was he recommending inaction. Rather, in the moment when one is called to act for the other, one must always recognize the danger of imposing the self on the other or assuming that one’s own ideas are the only ones.

So what does this have to do with Libya? As anyone with a passing interest in or knowledge of international affairs knows, relations between the countries leading the assault on Libya and the wider Arab world have been fraught with conflict and misunderstanding. These relationships have not been ones of recognition, from any perspective. Many in the Arab world believe North Americans and Europeans are simply interested in oil or supporting Israel, while those leading the intervention often demonstrate an embarrassing lack of knowledge about diverse political and religious Arab communities.

Rather than argue that the coalition forces should not act, the point here is that in acting, American, British, French, Canadian, and Italian forces need to be sensitive to their history of colonialism, occupation, and intervention in the region. While they may have a responsibility to protect the civilians in Libya, they also have a responsibility to recognize the reality of others who may not simply accept their aid with open arms.

Responsibility as recognition is not easy, but if there is to be any real ethics in international affairs, perhaps we need to look to new sources for understanding that responsibility.

Anthony F. Lang Jr. is senior lecturer in the School of International Relations at the University of St. Andrews. He has written most recently for Religion & Ethics NewsWeekly on Afghanistan.