BOB ABERNETHY, anchor: One of the most popular celebrations for Hindus around the world: Ganesha Chaturthi, the birthday of the elephant-headed god Lord Ganesha. Hindus honor thousands of deities, described as many manifestations of one god. They also aspire to righteousness, summed up in the word “dharma.” In Flushing, New York, as Hindus gathered to honor Ganesha, we spoke of him and dharma and Hindu worship generally with Professor S. N. Shridhar of the State University of New York at Stony Brook. 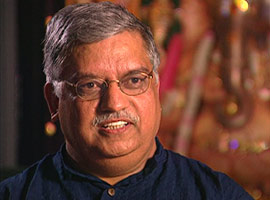 Professor S. N. SRIDHAR (Professor of Linguistics and India Studies and Chair, Department of Asian and Asian-American Studies, State University of New York, Stony Brook): Every Hindu has a personal god, a favorite god. But there is no particular rational justification for choosing this god or that. But Ganesha is a god that is chosen by almost everybody because he is the remover of obstacles.

Hinduism inherently allows a tremendous amount of freedom to the devotees in imagining their gods in different ways, and who are we to say that my way is better than yours?

Ganesha is represented as a happy, fun-loving god. When you look at Ganesha in profile, the upraised trunk of his elephant head can give the impression of “aum.” “Aum” is the most sacred syllable in Hinduism. In pronouncing “aum,” you start with the vowel “ah” and end with the consonant “mah,” so,”ah” with your open mouth and “mah” by closing the lips. Between them, these two sounds incorporate, encompass, encapsulate everything that you can possibly articulate in the entire universe. Hindus use this as a symbolic way of representing God. Mantras also usually start with “aum.”

The Hindu worship ritual begins by invoking the presence of that particular god, Ganesha in this case, inviting and installing the gods in the image. And then you offer them hospitality. So it’s just like a guest visiting your house. You offer them a seat to sit on, drink, food, clothes, flowers, all sorts of things that you would normally offer a guest.

What I pray for depends on the particular circumstances in my life. Generally, I pray, “Give me the right sense so that I do the right things. Give me the right judgment. Inspire me with the right thoughts so that my instincts, and my reactions, and my judgment, and and my action would all be according to the principles of dharma.” The Hindu belief is that if you lead a life of dharma, everything else will fall in place.