EYAL AVIV (George Washington University): What makes Wirathu very controversial is that he is the spearhead of a movement known as 969 which is a movement that recently incited violence and targeted the Muslim ethnic minority in Burma and believed to be responsible for encouraging some acts of atrocities against this minority.

The rhetoric is the rhetoric of a culture and a society under siege. They fear that they are surrounded by countries like Bangladesh and slightly further, Pakistan and also, they have Muslim powers like Indonesia and Malaysia, and they worry that there is some sort of like — I’m talking here only about the 969 movement and their followers — that they are threatened by gradual invasion of Islam that will take over their lifestyle and their faith and that’s part of the reason why they’re reacting with fear and with aggression to, as they see it, trying to prevent the external threat. 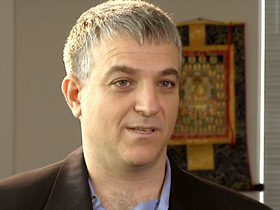 He’s not bringing anything new to the table in terms of his Buddhist teachings besides the fact that he adds more in his preaching elements that are not necessary Buddhist. Like fear, like nationalism, like the concern from what he perceived to be the Islamic danger to Burma.

Buddhism grew up with many faiths around it from the very inception of the movement. There's very little of disparaging and rejecting other religions.

The Buddhist path and the Buddhist canon is very explicit about the danger, slippery slope of where fear can lead you. So there is a lot of irony in the fact that the monk Wirathu and his followers are using fear in order to incite acts of violence that are precisely against the spirit of so much of the Buddhist teaching. 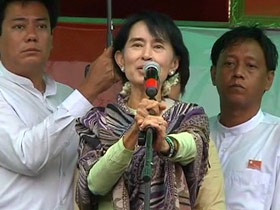 Other famous and well-respected religious leaders published an open letter for what they called the "brothers and sisters" among the Burmese Buddhist community and asked them to show tolerance and show compassion to anyone in Burma, whatever their creed or ethnic background is, so I think that there is a discomfort in the general Buddhist community when they witness what’s going on in Burma.

We saw recently gathering in mosques, Muslim mosques of interfaith dialogues. We also saw Buddhist monastery that gave refuge to Muslim refugees. So I think that there is a lot of reasons to be hopeful and be optimistic that the future of Burma will be able to get beyond those ethnical differences into more mature democracy.

Now that Burma is a fledgling democracy, there is room for people from different faiths and different backgrounds to live in harmonious coexistence. That’s something that can trickle down and hopefully counter fear and counter thoughts of violence whether it’s among Buddhists or among Muslims in Burma.

During the past year in Burma, also known as Myanmar, Buddhist mobs have raged against the country’s Muslim minority, encouraged by the incendiary rhetoric of a radical Theravada Buddhist monk named Wirathu. He leads a nationalist movement called 969 and has called on Buddhists to shun people of other faiths. In July a bomb exploded near where he was speaking, viewed by some as a possible assassination attempt, and this month hundreds of monks demonstrated against both the bombing and the rising international criticism of Wirathu. R&E summer interns Mark Meyers, a senior at Liberty University, and Jordan Bowen, a junior at the University of Missouri, interviewed George Washington University religious studies and international affairs professor Eyal Aviv about Wirathu, Buddhist extremism, and prospects for interfaith understanding. Interview by Jordan Bowen. Edited by Mark Meyers and Fred Yi.