FRED DE SAM LAZARO, correspondent: Football is a big money-maker for Notre Dame University. The storied Fighting Irish name is a lucrative brand in the four-billion-dollar-a-year business of licensed apparel. In the campus bookstore, one display is trying to stand out in a crowded space.

JOE BOZICH (Founder and CEO, Knights Apparel): Every garment has a hangtag on it, has a picture of one of our employees. One of the hangtags says, “My son goes to school because of these clothes.” Another one might say, “I can afford food, clean water, and medicine for my children when they’re sick because of your purchase of these clothes.” 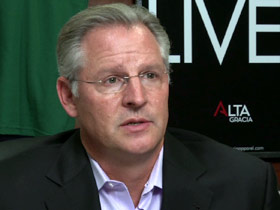 DE SAM LAZARO: Joe Bozich founded the Knights Apparel company in 2001 and built it into the largest maker of licensed college sportswear. These shirts are made in a tiny corner of the Knights empire: a factory called Altagracia that pays people like Manuel Guzman a living wage. Unusual does not begin to describe the factory where Guzman works in the Dominican Republic, a Caribbean nation of nearly 10 million, where unemployment exceeds 15 percent. The factory atmosphere is relaxed, the music is loud.

MANUEL GUZMAN: (through translator) There is no pressure here to produce all the time. People come here to train us, lawyers have taught us our rights. Also, we have a union that protects us.

(to Vargas) Are the wages sufficient?

DE SAM LAZARO: Yes, she responded. Wages are based on the cost of living for a family of five, calculated by the country’s central bank and adjusted every year for inflation.

VARGAS: (through translator) For me the most important thing is that my children have been able to go to school. I even have my oldest daughter in college. 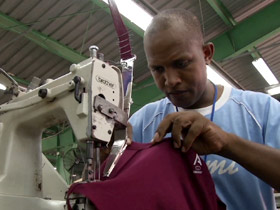 DE SAM LAZARO: For Manuel Guzman and his wife, Digna Martinez, his job at Altagracia has meant a healthy diet.

DIGNA MARTINEZ:(through translator) He was jobless for nine months, and we have four kids who don’t understand when you tell them there’s no milk, so it was difficult. This is such a blessing.

DE SAM LAZARO: Another blessing they count on is this finished home in place of the half-built shack that once was here. Workers at the Altagracia factory earn about three dollars an hour. It might not sound like much but that’s three times the legal minimum wage in the Dominican Republic. And just for comparison, Bangladesh’s government just announced that it plans to raise the minimum wage for its garment workers from about 19 cents an hour to about 34 cents per hour. All around the Altagracia factory are reminders of the daunting global competition. Thousands of jobs have moved to lower-cost countries. Altagracia’s location was once a factory that employed more than 1,000 before its previous owners shut it down. It now has just 130 employees. And Altagracia itself is running at just 60 percent of capacity. In three years of operation, it has yet to turn a profit. That doesn’t surprise one expert who has studied the plant. Georgetown University’s John Kline says there have been previous, short-lived attempts at living-wage factories. 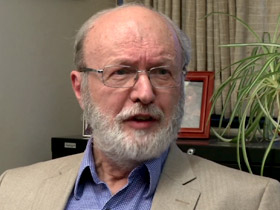 DE SAM LAZARO: Knights Apparel founder Joe Bozich says he is in it for the long haul. Garment industry wages and working conditions have come under critical scrutiny, especially after the recent series of deadly fires and accidents in Bangladesh. But Bozich created Altagracia much earlier in 2010. He says a setback in his own health made him especially sympathetic to the plight of garment workers.

BOZICH: Can you imagine what it would be like to know every night that your kids are going to bed hungry, you can only afford one meal a day. I’ve had some experience that made me think about those things in my own life, including my own diagnosis with a disease called multiple sclerosis. And the good news for me was, though, I always had hope. 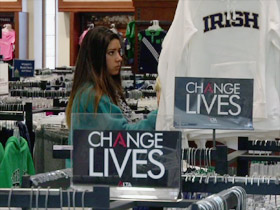 DE SAM LAZARO: He says there’s growing concern among consumers about garment industry conditions, and that’s helping the market for ethically produced goods. Altagracia apparel is now sold in more than 800 college bookstores. What we don’t know yet is how it will fare in this competitive space, says Georgetown’s Kline.

KLINE: A lot of brands are built on reputation by celebrity endorsements. What he’s trying to do is build a brand name that gives him pricing advantages on something else, on good worker conditions.

DE SAM LAZARO: And do you have inkling yet about whether that has cachet?

KLINE: You certainly have a lot of studies that have been done of what people say: that they will pay more for products that they know are made under good labor conditions. I don’t know that there are convincing studies that people really follow through on this.

DE SAM LAZARO: Our informal survey showed some of the challenges. These freshmen said they were sympathetic to the issue of fair trade and workers’ rights, but not particularly tuned in. 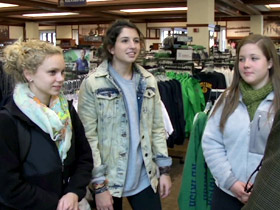 GRACE GUIBERT: It’s not something I’ve really thought about. I mean, I’m always aware that things are made in sweatshops and that it happens, but I never think about it when I’m buying.

DE SAM LAZARO: For others, price is king.

BRI HOUSER: No, I’d probably buy the one that was cheaper.

DE SAM LAZARO: Bozich says he’s ready to compete on price, so Altagracia’s approach is to not raise its prices or ask for any charity from the consumer. Even though higher wages raise its production costs by 20 to 30 percent...

BOZICH: ...there’s a business model to doing good, and [it] could be good business, but we also think there’s benefits to our business overall, as a result of being involved in this project from a reputational standpoint. We’re all aware of the recent tragedies that have transpired in Bangladesh, and as a result of Altagracia there’s been a lot of question about, well, is there anybody doing it differently? 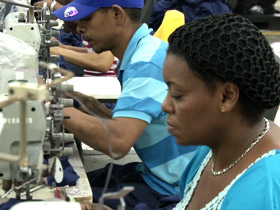 DE SAM LAZARO: Bozich is trying to market that Alta difference in going after volume sales. Altagracia won the bid last year, for example, for 150,000 football-themed shirts sold for a student fundraiser that helps needy students at Notre Dame.

JOHN WETZEL: We do see a lot of people who hear about our cause and then just buy the shirt, and so then if they are able to hear about another cause on top of that, it makes their decision easier.

DE SAM LAZARO: Bozich says high productivity at Altagracia and the promise of more business should allow the factory to soon break even.

BOZICH: I think that’s going to transpire in 2014. Recently the National Hockey League has just made the decision to license Altagracia. So we’ll now be able to produce all of the NHL teams in the Altagracia factory and bring that to market.

DE SAM LAZARO: So much will depend on consumers, he says, on factors as varied as a team’s performance—even a news headline from Bangladesh.

For Religion & Ethics NewsWeekly, this is Fred de Sam Lazaro, Altagracia in the Dominican Republic.

“We’re all aware of the recent tragedies in Bangladesh,” says Joe Bozich. But “is there anybody doing it differently?” The sustainable corporate model at his Alta Gracia garment factory in the Dominican Republic is an attempt to do just that.