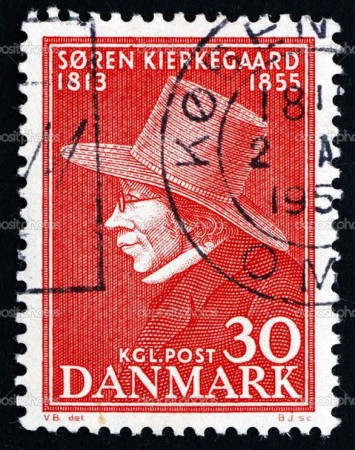 Vice President Joe Biden has frequently acknowledged that only his faith has enabled him to endure the untimely death of his son, Beau. In a talk show in September, Biden revealed that his wife Jill had taped an expression from philosopher and theologian Soren Kierkegaard (1813-1855) to his mirror: “Faith sees best in the dark.” At the recent White House Easter prayer breakfast, Biden echoed that same half sentence. But what do those simple six words from the Danish firebrand mean?

The expression that has provided such sustenance to Mr. Biden can be found in Kierkegaard’s 1847 book, Uplifting Discourses in Various Spirits,* in a section of text entitled “The Gospel of Suffering.” The paragraph from which Biden cites reads:

“The believer humanly comprehends how heavy the suffering is, but in faith’s wonder that it is beneficial to him, he devoutly says: It is light. Humanly he says: It is impossible, but he says it again in faith’s wonder that what he humanly cannot understand is beneficial to him. In other words, when sagacity is able to perceive the beneficialness, then faith cannot see God; but when in the dark night of suffering sagacity cannot see a handbreadth ahead of it, then faith can see God, since faith sees best in the dark.”

There are many ways to interpret this tissue of thought, but a few pages before this paragraph, Kierkegaard observes “…faith always pertains to what is not seen, be it the invisible or the improbable.” The benefits are easily intelligible when the love of your life accepts your marriage proposal and you have just landed the job of your dreams. In such sunny times, it does not require faith to discern the blessings of life.

Human understanding, however, cannot find anything good in the death of a son. In that obsidian night, sagacity is blind to goodness.

Though his entire life was a meditation on the Christian faith, Kierkegaard was no dew-eyed believer. He reminds his reader “it is not true that the Christian is exempted from human sufferings,” and when those sufferings are at your threshold, when the earthquakes of life rumble and there are no worldly advantages to point to, then neither the senses nor the mind can discern anything beneficial. In that darkness, faith sees best. And what does faith see? Faith sees what human understanding can only shake its head at, namely, “that the heavy suffering is beneficial.”

Gordon Marino is professor of philosophy and director of the Hong Kierkegaard Library at St. Olaf College. He is also editor of The Quotable Kierkegaard (Princeton Univ. Press, 2013).