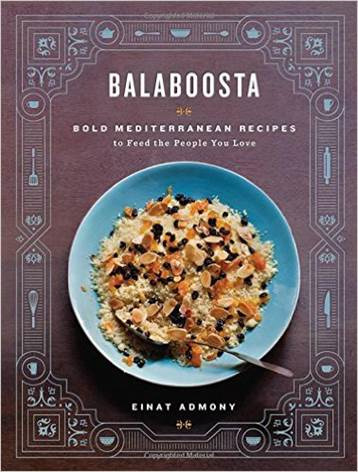 Balaboosta, a term of endearment in Yiddish, means “perfect homemaker.” But ask Admony for her own definition and she replies, “To me, balaboosta means someone who loves to bring family together by cooking and caring for them.” The word is also the title of her cookbook Balaboosta: Bold Mediterranean Recipes to Feed the People You Love.

At Ohev Sholom there was a Malchei haMitbach (Kings of the Kitchen) cooking contest, for which Admony was one of the guest celebrity judges. The concepts of creativity and gourmet sustainability in Jewish cooking were on display as four teams had to cook from their soul, choosing one ingredient to highlight from the seven species indigenous to Israel. Each on-the-spot creation came from the imagination of the participants.

Admony’s latke-making demonstration strayed from the traditional Ashkenazi potato pancake recipe and focused more on a gourmet approach, incorporating ingredients such as turmeric and Greek yogurt for a tzatki-like dipping sauce.

“Much like us (as Jews),” said Admony, “Israeli cooking is a melting pot of flavors. It comes from a lot of different cultures that came together throughout Israel, from Morocco to Eastern Europe.”

“I was a driver in the Israeli army,” Admony explained, “but being in the army helped me to be more disciplined, punctual, clean, and organized—all the skills that are needed to be successful in the kitchen.”

You don’t have to have served in the Israeli army to master one of Admony’s Hanukkah recipes. Here is one of the latke recipes she used in her cooking demonstration at the synagogue: 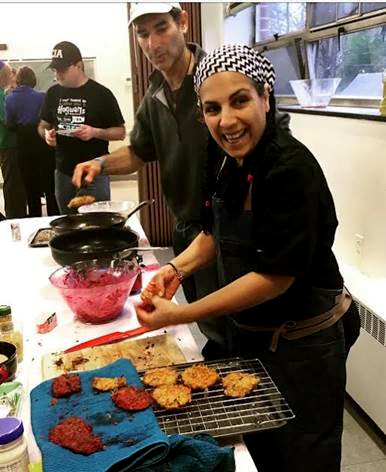 Right after the ingredients are grated, take a towel a squeeze out all the excess water from the potatoes and beets. Mix all of the above ingredients together in a mixing bowl. Heat up a sauté pan with 1⁄2” of oil. When the oil is hot (around 370 degrees F) create 2” round patties from the mixture and fry on both sides until they are golden brown.

For the yogurt sauce:

Mix chopped preserved lemons with the honey to balance out the bitterness. Gently mix in the plain yogurt with the oil and lemon juice until you have a homogenous mixture. Add a pinch of turmeric for color, if you wish. Season with salt. Dollop on latkes and serve.