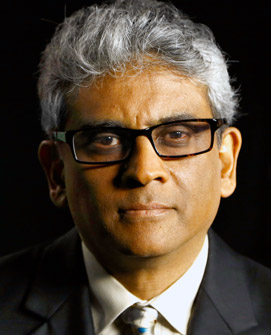 Fred de Sam Lazaro is director of the Under-Told Stories Project, a program that combines teaching and international journalism, and a senior distinguished fellow at the Hendrickson Institute for Ethical Leadership at Saint Mary’s University of Minnesota.

He has worked for the PBS NewsHour since 1985 and is a regular contributor and substitute anchor for Religion & Ethics NewsWeekly. He also directed two films from India and the Democratic Republic of Congo for the PBS documentary series Wide Angle. De Sam Lazaro’s stories have ranged widely from regional reports in the northern Midwest to AIDS, public health, international development, and social entrepreneurship across the global South. From Haiti to sub-Saharan Africa to South Asia, he has focused on stories that are underreported in the mainstream US media. He led the first American crew to cover the crisis in Sudan’s Darfur region and has reported from 40 countries.

De Sam Lazaro is the recipient of an honorary doctorate, numerous journalism awards, and media fellowships from the Kaiser Family Foundation and the University of Michigan. He has been honored with several industry awards, including the CINE Golden Eagle and the Silver Angel Award from Excellence in Media for his report on anti-trafficking activist Sunitha Krishnan and the International Film and Video Festival Award for his report on a Thailand AIDS refuge. His 2005 report, “Right to Live,” and his 2007 feature story “Indian Violins” also received Silver Angel Awards from Excellence in Media. In addition, his 2005 Darfur report received the Unity Award in Media from Lincoln University.

De Sam Lazaro is a trustee at the College of St. Scholastica, in Duluth, Minnesota, his alma mater. He has also served on the boards of the Asian American Journalists Association and the Children’s Law Center of Minnesota. Born in Bangalore, India, he now resides in St. Paul, Minnesota. He is married and has three children.