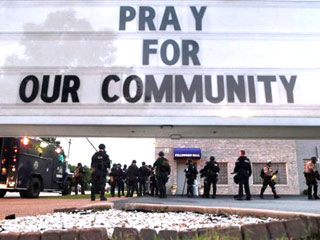 Religious leaders across the country called for prayers about the tense situation in Ferguson, Missouri, after a police officer shot and killed Michael Brown, an unarmed African-American teenager. In Missouri, faith leaders have been appealing for peace and trying to defuse anger amid sometimes violent confrontations with police. Many national religious groups are urging more dialogue about issues surrounding justice, race, and the use of police force. The faith-based PICO Network called on its member congregations to sponsor “Live Free Sabbaths” this weekend (August 15-17, 2014) in order, the group said, to create space for healing and hope in the wake of this and other similar incidents.