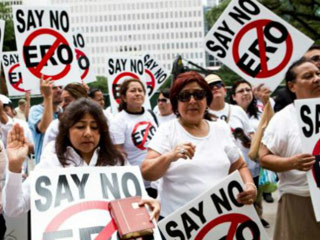 Some pastors in Houston, Texas are up in arms after being ordered to turn over their sermons to the city. This week the city’s attorneys subpoenaed sermons by pastors who have been opposing a nondiscrimination ordinance that among other things would allow transgender people to use the public restroom of their choice. Christian activists have sued the city over the ordinance, which has not yet gone into effect. Religious freedom advocates, including the Interfaith Alliance, denounced the subpoena as a violation of the First Amendment, and some pastors are calling for civil disobedience.