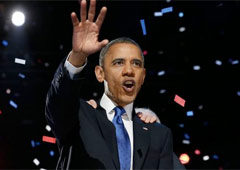 Like many others in the nation, faith groups are assessing the impact of this week’s election. According to exit polls, President Obama won a slight majority of Catholic voters overall, thanks largely to strong support from Latino Catholics. Mitt Romney won the white Catholic vote by an almost 20-point margin. Almost 80 percent of evangelicals who voted voted for Romney. Black Protestants went overwhelmingly for Obama, as did the vast majority of Jews. But the biggest share of Obama’s faith coalition was voters who say they aren’t affiliated with any religion.

Steve Schneck was co-chair of Catholics for Obama. He says while issues like abortion, religious liberty and gay marriage were important, in the end, it was the economy that tipped the scale for the president.

Ralph Reed of the Faith and Freedom Coalition admitted that a massive mobilization among religious conservatives wasn’t enough to offset the number of women, young people and minorities who voted Democratic.

RALPH REED, Founder and Chair, Faith and Freedom Coalition: I think we need to do a better job of not looking like, you know, your daddy’s religious right. You know, we have to be as a movement younger. We have to be more diverse ethnically.

In Massachusetts, a measure to legalize physician-assisted suicide was narrowly defeated. In California, voters decided not to abolish the death penalty.

With all the acrimony around the election, many religious leaders called for a new spirit of civility. More than 700 churches held special Election Day Communion services. Organizers said they wanted to refocus allegiance to God and work for justice beyond the ballot box.

Watch our discussion of religion, politics, and Election 2012.