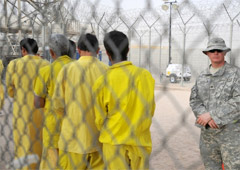 An independent, nonpartisan report released this week says there is “indisputable” evidence that the United States engaged in torture in the years following the 9/11 attacks. The authors, among them a member of the Bush administration, cited “detailed discussions” involving President George W. Bush and his top advisers on “the wisdom, propriety and legality of inflicting pain and torment” on detainees. The task force found “no firm or persuasive evidence” that the CIA’s interrogation methods provided useful information that could not have been obtained by other means.