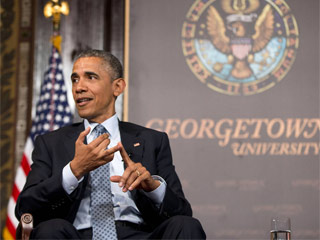 In Washington, President Obama joined a panel discussion on poverty at a Georgetown University conference of Catholic and evangelical leaders. He spoke about America’s growing opportunity gap and praised people of faith for playing a unique role in the fight against poverty:

PRESIDENT BARACK OBAMA: “These faith-based organizations are interacting with folks who are struggling and know how good these people are, and know their stories, and it’s not just theological but it’s very concrete. They’re embedded in communities, and they’re making a difference in all kinds of ways.”

Panel members also discussed the moral obligation of both Republicans and Democrats to create paths of upward mobility, especially for young people:

PROFESSOR. ROBERT PUTNAM (Harvard University): “I’m talking about making poverty and the opportunity to escape from poverty a higher issue on both parties’ agendas.”