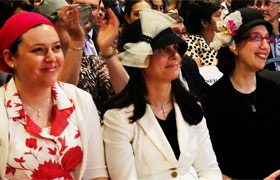 A major milestone in the Orthodox Jewish tradition: For the first time, three Orthodox women were ordained as clergy. They were not given the title “rabbi,” but rather will be called maharat, a Hebrew acronym for leader of Jewish law, spirituality, and Torah. While other branches of Judaism allow female rabbis, the Orthodox do not. The three graduates all have positions in Orthodox synagogues and organizations. They will be allowed to perform some, although not all, of the duties of a rabbi.