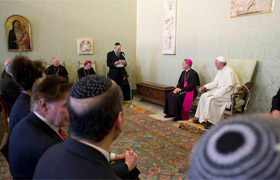 Pope Francis strongly condemned anti-Semitism, saying no Christian can be anti-Semitic because Christianity and Judaism share common roots. The pope made the comments in a meeting with Jewish leaders, the first time he has met officially as pope with a Jewish delegation. Afterward, one of the rabbis present referred to Francis as “a very good friend to the Jewish people.”