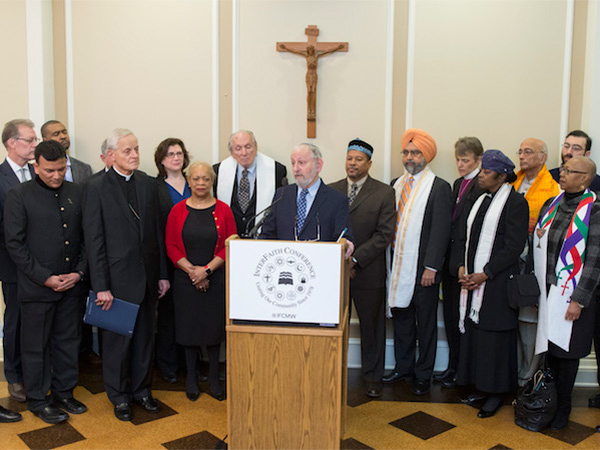 President Trump had a busy second week in office, and faith-based groups were also busy responding to many of the actions he has taken. On Thursday (February 2), the president attended the National Prayer Breakfast. Trump spoke extensively about the importance of religious freedom. He repeated his promise to repeal an IRS rule that bars pastors from endorsing candidates from the pulpit. He also condemned violations of religious freedom overseas. He said that’s in part why he issued a temporary ban on refugee resettlement and travel from seven predominantly Muslim nations.

President Donald Trump: “We will not allow a beachhead of intolerance to spread in our nation.”

But Trump’s immigration orders continued to draw widespread criticism from religious groups, including the US Catholic bishops, as well as mainline Protestants, evangelicals, and Jewish and Muslim groups. In Washington, as a broad religious coalition urged the nation to adopt a new interfaith vision, several leaders repeated their concerns about the ban:

Cardinal Donald Wuerl, Archdiocese of Washington: “While we are very, very aware of the need for security, we also very much recognize that that cannot be at the cost of people being persecuted.”