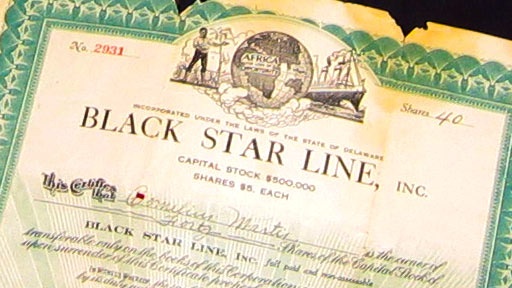 A woman recently found two Black Star Line stock certificates, which had been purchased by her great grandfather in 1919.

She didn't know the significance of the documents, but what looked like a Marcus Garvey signature on the papers saved them from the trash bin.

In the early 1920s, the most famous and feared black man in America was Marcus Garvey. At giant rallies, he demanded an end to the racial violence, poverty, and discrimination plaguing the country.

Garvey founded the Black Star Line steam ship company through his United Negro Improvement Association in 1919. No venture reflected Garvey’s revolutionary dream of equality better than the Black Star Line, a mighty fleet of ships that would bring economic power to blacks around the world and transport many of them back to a proud and independent African nation.

Could this certificate be a rare artifact from Garvey's heyday?

History Detectives heads to New York and North Carolina to learn more about this controversial and enigmatic figure who fought for economic self-reliance and political self-determination for African-Americans.