Hillary Clinton and Donald Trump are two of the most polarizing presidential candidates in modern history.

What has shaped them? How would they lead, if elected president? And why do they want to take on one of the most difficult jobs imaginable?

On Sept. 27, FRONTLINE’s acclaimed election-year series The Choice returns with a two-hour, dual biography that goes beyond the headlines Trump and Clinton have generated to tell the inside story of who they really are.

Drawing on dozens of interviews with those who know the candidates best — friends and family, advisors and adversaries — as well as authors, journalists, and political insiders, The Choice 2016 will offer trustworthy journalism, big-picture context, and powerful new insights at a moment when voters are being bombarded with conflicting partisan stories about each candidate.

It’s one of the most anticipated programs of the election season — and starting today, you can take a sneak peek in FRONTLINE’s just-released, four-minute trailer.

As the trailer indicates, The Choice 2016 will investigate formative moments in the lives of Clinton and Trump, from their childhoods, to their school experiences, to their tumultuous careers in the public eye. It’s the latest project from veteran FRONTLINE filmmaker Michael Kirk and his team, and it comes at a critical moment in American politics.

“The bitter divide in this country makes it incredibly hard for people to understand how others could support the candidate on the opposite side,” says Kirk. “After watching The Choice 2016, no matter where your allegiance lies, you’ll come away with a new and richer understanding of who the opposing candidates are, and how and why he or she has reached this point.”

The Choice 2016 premieres Tuesday, September 27, at 9 p.m. EST/8 p.m. CST on PBS (check local listings) and will stream in full, for free, online at pbs.org/frontline. 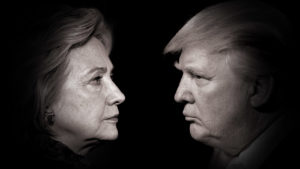