March 30, 2018 by Independent Lens in Beyond the Films

[Note: Please enjoy this guest essay on Iranian artists and censorships, in conjunction with the broadcast premiere of When God Sleeps, by artist and game creator Kurosh ValaNejad. See more on him at the end.]

In the Islamic Republic of Iran, artistic expression is not denied.  Iranians can sing and dance however and do whatever they want, which they do. They are free to write about the sacred and profane, about politics and religion, and even paint nudes while nude. Why not? They can dress chic or trashy, and bake on their makeup, no matter their gender. They can pluck or tease their unibrows. Iranians explore their artistic freedom more than Americans realize, because they can…as long as they keep it out of public view.

Should they want to share their creative expression with an audience, no matter how small or marginal, they must fill out a form, and adhere to a set of guidelines, Islamic, and impossible.  It’s a prescription of public appearance and behavior, mandated by the Ministry of Culture, because God never sleeps.

Movies, television programs and the commercials that air with them reach the largest number of Iranians and are therefore the most regulated by the Ministry. In the documentary A Cinema of Discontent: Film Censorship in Iran, the popular actress Fatemeh Motamed-Arya explains that the restrictions and religious imposition are so heavy-handed that many of the top filmmakers stopped making movies.

Noureddin Zarrinkelk, widely regarded as “the Father of Animation” in Iran for starting the first school of animation, lost his faculty position because he touched the hair of a female student during a lesson. The Islamic guidelines originally implemented to protect women are now used to silence the voices of Iran’s most accomplished storytellers.

When an infraction of the rules can end a career and film projects are approved or denied arbitrarily, a frustration festers in young filmmakers who find ways to defy the system. Using a coded language and often with humor, they point out the absurdity of applying 7th-century Islamic code to filmmaking, the art form of the 20th century.

Many who viewed this parody on the internet of athletes competing at the Olympics thought it was real footage from Iran’s state-run sports network.

(Meanwhile, in America, Stephen Colbert reported on the nonsensical rules applied by television censors who draw the line distinguishing the point at which art is considered pornographic.  Using humor, Colbert points out the arbitrary application of rules.)

And I am reminded of a quote by Marjane Satrapi, author and illustrator behind the acclaimed graphic novel and film Persepolis. 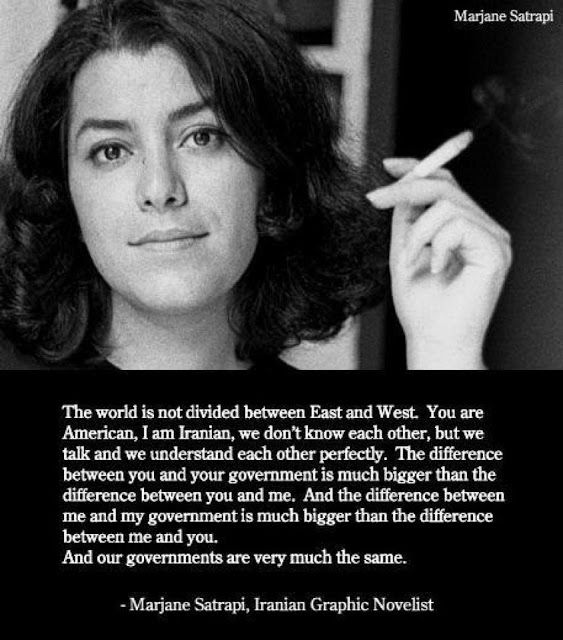 Iranians love poetry and memorize long passages. From the 13th and 14th centuries. Saadi, Rumi, and Hafez are a trio whose poems of love continue to endure nearly a millennium later.  The master of speech, Saadi wrote an aphorism about our common humanity with a lesson that is timely and remains timeless.

Please listen to American President Obama’s Nowruz Greeting (Persian New Year) on the First Day of Spring (March 20, 2009) to the people of Iran, including a translation of Saadi’s most famous poem “Bani Adam.”

As a visual storyteller with allegiance to no particular faith, the six lines in “Bani Adam” reminded me that I too am part of a shared humanity, despite the rejections I faced as American Iranian, who was luckier than his peers to be an Iranian American. Six short lines written nearly 1000 years ago kept me grounded and strong.

So here is another trio of Lovers of Language, whose hard lessons of loss may lift the next generation of the misunderstood or mistaken, who simply need reminding that though they are alone, that they need not feel lonely. Shahin Najafi, Mohsen Namjoo, and rapper Nima can connect you to deep roots underground thanks to the technology of our networked culture.

Dubbed by The New York Times as “the Bob Dylan of Iran,” Namjoo was banned from Iran and no longer welcome to Islamic countries insulted when he sang a phrase from the Koran. Here he is singing the words of Hafez, a Sufi mystic to so many who are thankfully not insulted by his choice of co-author.

In shadow and representing a generation of young Iranians who have only known Iran as an Islamic Republic, Nima (Nami) raps to a symbolic father (“BaBa”) with disgust (“Ah!”) transforming his anger into an eloquence, determined to bring color back to their lives:

The 94-year-old religious leader who wanted to silence Najafi must be dumbfounded or ignorant of the fact that his actions are the reason Najafi’s voice is now amplified to the world. Shahin is unflinching and continues to sing, bringing attention to those marginalized by self-titled religious leaders who have forgotten the words of the Prophet that inspired Saadi, to have compassion for each other. For when one limb aches, the whole body is restless with fever.

Now, please enjoy this new playlist curated for Spotify, of some of these Iranian musicians and others who have experienced censorship in their careers:

Censorship mandated by the Ministry of Culture occurs in every aspect of life in Iran. The government’s guidance is sacrosanct because it says so. But contrary to popular belief the most effective method of adherence is not state-mandated regulation, but the hegemony of self-censorship from 40 years of fear, not faith.

A family friend sent me this joke: “An inmate at Evin prison goes to the library to look for three books. The librarian says, ‘We don’t have the books but we have the authors. You can talk to them.'”

About the Author:  Kurosh ValaNejad is an Iranian American, who was born an American Iranian in Tehran in 1966 to an Iranian father and American Mother.  He is a research artist and co-creator of The Cat and the Coup, a documentary video game about Mossadegh. Kurosh believes this mess that is the relationship of his two countries stems from a sloppy, or snooty mis-translation.  He hopes to spend the summer looking for early examples of poor translation in the Diba library, the largest collection of books about Iran not written in Persian.