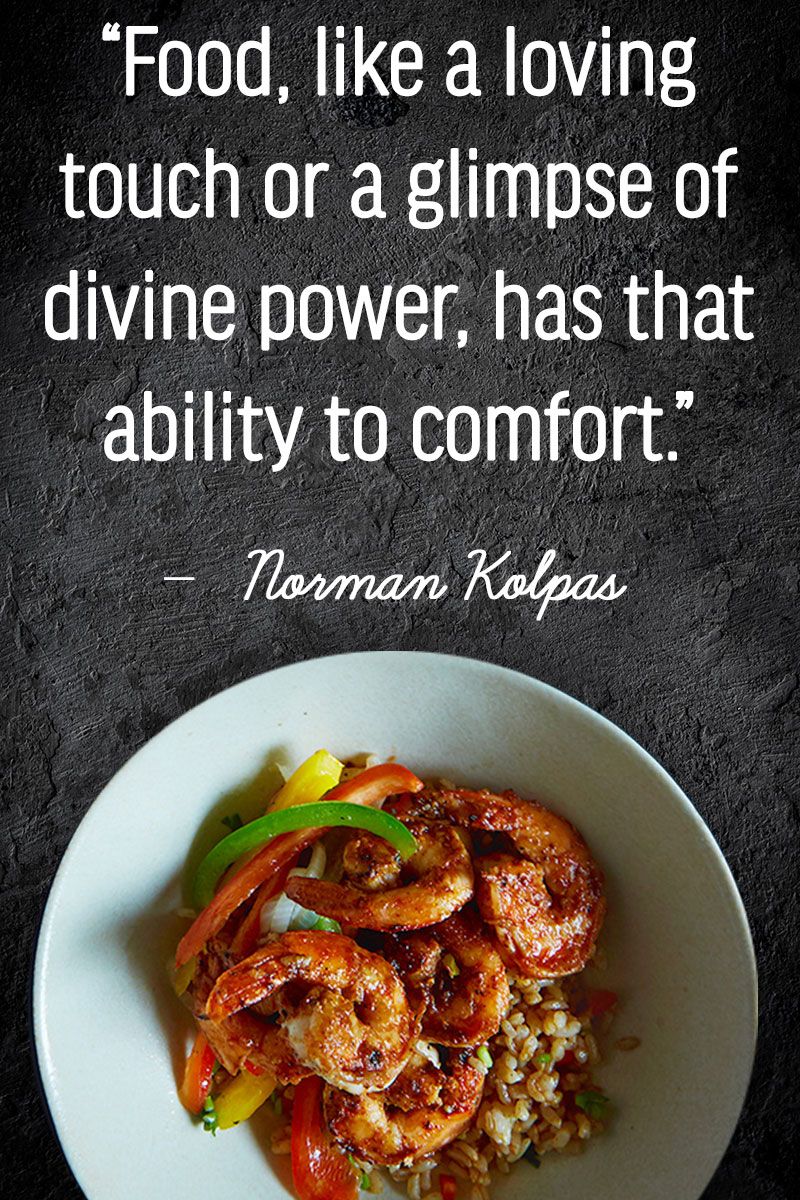 In trying times, we turn to food.

Especially comfort food, recipes from childhood, from our families, that warm our spirits and send us back to simpler times.

We reached out to some of the participants and filmmakers behind a diverse array of Independent Lens films for their own favorite comfort food recipes, and got some mouth-watering responses.

After reading and trying their recipes, let us know your own favorites in the comments.

Oscar Ramos, the dedicated California teacher featured in East of Salinas who was awarded the Cesar Chavez Human Rights Award, sent us a favorite family recipe.

“Tostadas de Nopales remind me of home. It takes me back to my childhood when I was living in a small town in Mexico. Nopales grew in the wild. As children, my sister and I would go out to pick them so my mother could make lunch. It’s become a traditional dish at family gatherings. Over the years, we’ve tried different ingredients but we always come back to the original recipe. It fills our tummy and warms our heart.”

Chop the nopales into small squares and boil them for approximately 1 hour. Let it cool.

Chop the tomatoes and onions.

Mix the chopped nopales, tomatoes, onions, and cilantro into a large bowl.

Grab a tostada and add the nopales from the bowl on top of it with a large spoon.

Top it off with some queso fresco and some slices of avocado.

To add a spicy kick, chop some Serrano peppers or add your favorite spicy salsa.

See more about Oscar Ramos and his special relationship with his former student Jose, in this short video.

Jackie Mow, filmmaker who co-directed East of Salinas, contributed a meaningful recipe that was her favorite comfort food and is now also her daughter’s favorite.

“For as long as I can remember my mom has cooked Zha Cai Rou Si. Sometimes she serves it on top of noodle soup, other times on rice. My sister and I often eat it cold the next morning. Piping hot from the wok or cold out of a Tupperware: delicious either way.

“I traveled a lot in my twenties. Every time I came home, my mom would make my favorite dishes, Zha Cai Rou Si always among them. Years later she introduced the dish to her granddaughter, who was a toddler at the time. Now twelve, my daughter requests it as soon as we arrive in Los Angeles from our home in Cambridge, MA. It’s always sitting in the Tupperware. As soon as we walk in the door, my mom says, ‘The Zha Cai is ready for you.’

“Lately, my mom has gotten lazy, or maybe just tired.  She started ordering Zha Cai Rou Si from a restaurant and supplementing it with more pickled vegetables and meat. The last time we visited, she didn’t even bother to make it. She told us that she was getting too old to cook.

“So I finally asked her for the recipe.”

Christopher Scott, the center of the film True Conviction, spent 15 years in prison falsely accused and convicted of murder and now runs House of Renewed Hope in Dallas. Needless to say, comfort food was and is very important to Christopher and he passed along one of his childhood go-tos.

Christopher: “Pork chops was considered to be an expensive meal especially for a family of 11 (my parents and 8 siblings and me). We could smell good country home cooking; once we stepped on the porch I immediately knew it was going down. Hot sauce on my chops, butter and sugar on my rice would set it off. This meal would be considered a Special Occasion Sunday Meal.”

Ron “Stray Dog” Hall, star of Independent Lens Stray Dog, directed by Debra Granik (Winter’s Bone, and her new film Leave No Trace), is an absolute one-of-a-kind dude, a veteran, motorcycle riding, kitten-loving gardener, a blue-collar chef and helper of homeless vets, and a lot more. So no surprise he sent us an unpretentious, delicious recipe that comes off the land: Poke(weed), bacon and eggs. Note: what he calls “poke” here several times is not to be confused with the raw fish dish.

Here’s more on poke from Larry Rankin on Delishably, with a warning. (tl;dr: COOK IT before you eat it.) “Pokeweed can be found throughout the majority of the Continental United States but is far more prevalent in the central and eastern states of the South. It is a poisonous weed, related to nightshade, but if prepared for consumption correctly, it is actually considered a delicacy by many denizens of the rural United States. In fact, in its cooked form, pokeweed is so popular that many states, especially those in the South, hold yearly festivals in the early spring to commemorate it.”

Debra and producer Tory Stewart communicated with Ron via text for us, so what follows are the highlights of his notes on the dish and a tangential anecdote we couldn’t leave out.

Ron: “Sorry it took me a while to get back to you. Been driving around trying to get a homeless vet set up. I don’t get phone service deep in the hills where we were. Regarding how to cook poke, there are many ways to prepare poke  This is how my mom did it. Simple, with chopped bacon, eggs and poke.”

“Note: For this batch, I used four eggs and four strips of bacon. I pour a little milk in the eggs to fluff them up a bit.” 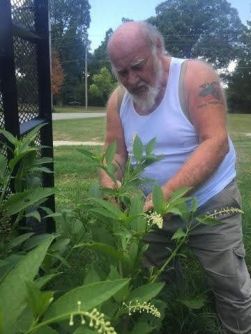 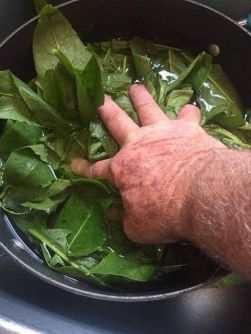 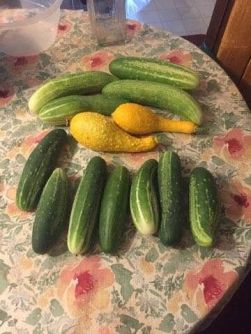 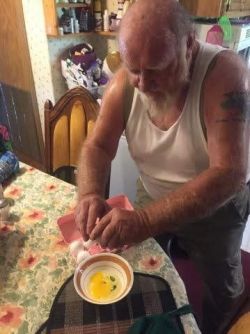 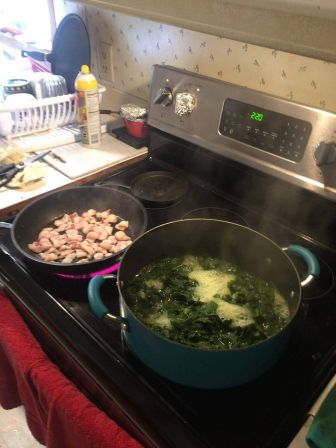 bacon, poke(weed) and eggs in progress 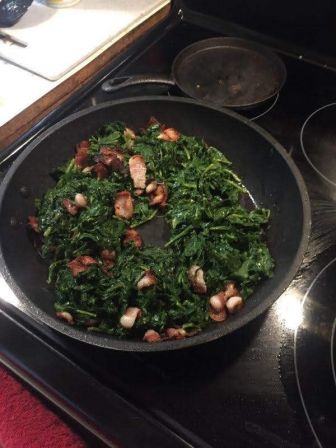 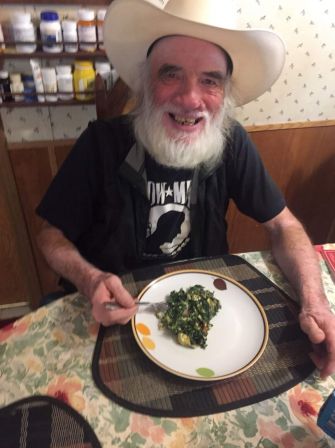 More from Ron: “The man tasting the fixings is Greg. He was a homeless veteran in California. He survived the poke and ate seconds. His animal is a cat who is was also homeless.  They hung together and finally got a place out of the weather. But it was in a rundown area. We have been talking for a few months. He came here to look around to see if he wanted to move here. It’s a done deal. Sunday he is going back to California to tie up some loose ends — gather up his cat and other personal items.  He is coming back and will live at my park.”

Ron really does love to cook

Breakfast Taco
Mando Rayo of Tacos of Texas writes: “There is mucho estrés today and if you live in Texas, well, there’s plenty to comfort you with the plethora of tacos. Breakfast tacos always hit the spot. I mean what’s better than waking up to fresh tortillas, eggs and your choice of bacon, chorizo, or migas.”
My go-to comfort breakfast taco is always eggs, bean and bacon with a corn or flour tortilla. Why, you might ask? Three reasons:
1. Eggs: I love the creaminess of eggs.
2. Refried Beans: Because they are the Mexican mayonnaise.
3. Bacon: Anything with bacon is just wonderfully salty.
This recipe is pretty straightforward but here is a step by step process:
The steps:

What are your own favorite comfort food recipes? The meals that calm and nourish your soul. Post them in the comments. If you need more comfort, read our blog post on curing anxiety using apps.

The Pursuit of APP-iness: Can Tech Help Soothe Anxiety?