The Offspring of Birth of a Nation

February 1, 2017 | BY Sean Axmaker
POSTED IN Cinema
MORE ABOUT Birth of a Movement

D.W. Griffith’s The Birth of a Nation is inarguably one of the landmarks of American cinema. The distillation of the storytelling techniques, editing ideas, framing and visual composition, and nuanced approaches to performance that Griffith spent years exploring and experimenting within short subjects and mid-length films, it was the longest and most ambitious American film ever made when it was released in 1915 and took American audiences, critics, and filmmakers by storm. It also features demeaning caricatures of African American characters (all played by whites in blackface) and grotesque distortions of the post-war Southern history and it portrays the Ku Klux Klan as the saviors of white culture in the face of emancipation. It is, in the words of journalist Jelani Cobb, “The most pure, honest, unfiltered distillation of white racist thought of that time.”

The Independent Lens film Birth of a Movement is a reminder that criticism of Nation‘s racist politics is not a recent phenomenon. Even as the film was celebrated for its thrilling cinematic power, its distortions of American history and vile African American stereotypes were attacked in editorials and pamphlets across the country. Screenings were protested and local censor boards petitioned to limit or cancel screenings out of fears that the film would stir racist embers to life and set back the cause of civil rights.

Griffith defended his vision from all attacks, both as history and art, and denied accusations of racism with the unflappable, unmovable conviction of a Southern gentleman defending his nostalgic vision of the honorable antebellum South destroyed by Reconstruction. The Birth of a Nation became a phenomenon, not just a hit but a hugely influential film, and it remains one of the bedrocks of film history and, for all its hateful racism, a rousing piece of filmmaking.

It gave Griffith the clout to follow it up with an even more ambitious epic.

Intolerance (1916), as loaded a title as you could get from a man accused of racial prejudice, straddles four different eras and tackles no less than the destructive forces of religious, cultural, and social prejudice. The Birth of a Nation electrified viewers with its sophisticated storytelling on an epic scale. With Intolerance, Griffith wanted to push the art of cinematic storytelling into new dimensions. The scale of its Babylon sequence, complete with towering sets, live elephants, and hundreds of extras, made the film Hollywood’s original screen spectacle. Griffith’s camera is even more dynamic in action, while the linking sequence of a serene Lillian Gish as the eternal mother rocking an infant to sleep has the grace of a Renaissance painting, a delicate, intimate still life in motion.

And Griffith uses crosscutting not simply to create tension within the stories but to draw connections between the separate sequences and eras, an example of thematic editing that inspired Sergei Eisenstein’s theories of montage. It’s overwhelming and at times elephantine and was a flop with audiences, but it inspired filmmakers for years to come.

While some critics have called it Griffith’s apologia for The Birth of a Nation, Griffith himself explained that it was his response to critics of the film, that it was their “intolerance” of his artistic vision that he was addressing. Whatever his motivation, there is merit to both arguments.

On the one hand, it is a diatribe against prejudice that spans centuries and continents and draws on nothing less than the fall of Babylon and the death of Christ as exhibits in his case against the evils of intolerance. Yet you’ll notice no black faces in the massive cast. For all of his supposed embrace of diversity, it is a portrait of civilization as the domain of white people, whether it is modern America, ancient Babylon, or the Holy Land.

Just as interesting in the case of Griffith’s views on prejudice is Broken Blossoms (1919), a smaller and more delicate drama set in London’s Limehouse district and starring Richard Barthelmess as a Chinese immigrant (complete with slanted eyes and stereotypical robe) who shields abused waif Lillian Gish from her alcoholic brute of a father. It’s a tender and beautiful film but Griffith never quite overcame his fear of interracial romance—the dreamy Buddhist gives nary a chaste kiss to abused Christian waif (as seen in clip below).

These are far from the only “answers” to The Birth of a Nation. Just last year, Nate Parker released his own film called The Birth of a Nation, making his argument that the roots of the modern nation lay in the uprising led by Nat Turner against the white landowners who would lay claim to the ownership of human beings.

But the challenges to Griffith began long before. Independent director/producer Oscar Micheaux, the most successful and prolific black filmmaker of his day, directly confronted race and racism in such movies as Within Our Gates (1920), which took up the cause of education while broaching such taboo subjects as miscegenation and lynching, and in The Symbol of the Unconquered (1920), which portrays the KKK as a gang of racist thugs. These films were made on low budgets with limited resources and played on a circuit of theaters that catered exclusively to African American audiences.

One of the most devastating aftershocks of Griffith’s The Birth of a Nation was the way it established black stereotypes on the screen. With only a few exceptions, for decades African American characters in mainstream movies were relegated to comic relief and servant roles. Micheaux was one of a handful of entrepreneurial black filmmakers who presented educated and cultured African American characters that were businessmen and school teachers, cowboys and show business professionals, and people like any other with romantic desires and dramatic challenges.

Rarely seen by white audiences in their day and poorly preserved compared to the independent films of Hollywood maverick filmmakers, these films and many others were collected and digitally remastered by Kino for “Pioneers of African-American Cinema,” a landmark DVD/Blu-ray box set that brings these perspectives back to the conversation. 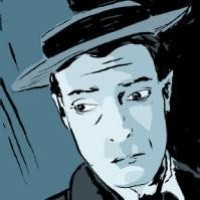 Sean Axmaker is a Seattle film critic and writer. His work appears in Parallax View, Turner Classic Movies online, Keyframe, and he writes a weekly newspaper column on streaming video column, which you can find at www.streamondemandathome.com.
VIEW ALL POSTS BY Sean Axmaker