Rapa Nui and Other Fragile Lands Rally Against Tourism Pollution

In a story that begins with a heartfelt message to their infant son about the unique character of his ancestral home Rapa Nui (also known as Easter Island), in their film Eating Up Easter director Sergio Mata’u Rapu with his wife writer/producer Elena Rapu explore cultural preservation, overpopulation, and escalating waste management issues facing the island.

A Polynesian island nearly 2,500 miles off the coast of Santiago, at only 63 square miles the Chilean territory withstands 120,000 tourists each year with the local population continuing to expand. Eating Up Easter illustrates the contrast between the director’s father, Sergio Rapu Haoa (the first native governor of Easter Island) who is constructing a new shopping mall to provide jobs and improve living conditions, and the director himself, along with other locals who are fighting to protect their diminishing culture and the land from overdevelopment.

It is far from the only unique place to have its environment degraded from tourism—even “eco-tourism.”

A major catalyst for the tourism boost first happened when NASA built a runway for the Space Shuttle on Rapa Nui in 1987. This new construction enabled larger planes to carry thousands of tourists in to see the landmark moai monoliths directly. 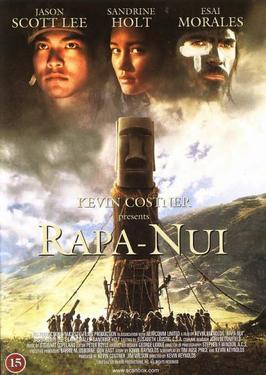 The island’s waste problem arose shortly after the Hollywood feature film Rapa-Nui production made landfall in 1993, causing locals to get a taste of independent wealth, which in turn made them purchase more products and produce more waste—but without the technology and facilities to dispose of it properly.

Additionally, globalization has put the unique Rapa Nui culture at risk, as it diminishes with each generation who isn’t inspired to learn the language and customs. (To combat this, as seen in Eating Up Easter, native Rapa Nui musicians Mahani Teave and Enrique Icka have dedicated their lives to running a free music school for the islander children where they teach traditional songs in the hopes of preserving their culture.)

An island previously ravaged by European missionaries, smallpox, tuberculosis, deforestation, heavy soil erosion, and the Peruvian slave trade, the few descendants of the Rapa Nui who survived understand the importance of taking pride in conservation and environmental cleanup efforts. Rapa Nui is entirely dependent on naval ships and various airlines to export their waste and recycling, so naturally, they have dreams of becoming a 100% green energy community.

With travel being temporarily restricted due to COVID-19 concerns, Rapa Nui residents have successfully petitioned to stop Chile’s LATAM Airlines from making landfall, and have requested the evacuation of all tourists in an effort to stop the spread of the virus. The lockdown provides an opportunity to push for great change towards independence from tourism, as the Rapa Nui have no choice but to survive without their primary source of income for the foreseeable future. As they try to work with limited medical resources, this will call for massive restructuring of the economy. Since the travel ban, there have been (as of this writing) six total confirmed COVID-19 cases, with one still active.

With the island unfortunately positioned within the Great Pacific Garbage Patch, the waste washing up on Rapa Nui shores comes from all over the world. Mama Piru, a local hero in combating the waste problem, was in charge of all the recycling operations on the island. She passed away shortly after Eating Up Easter had wrapped, and will be remembered for dedicating her remaining years fighting to inspire locals to take charge of the pollution problem and volunteer for beach clean-up days.

Tourism Waste Around the World

Unfortunately, Easter Island is not alone in tourism waste issues.

In Indonesia, Bali has a massive deforestation issue, with developers clearing land for hotel construction so they can handle the surge of tourists flocking due to the constant travel promotion during the age of social media.

In the Himalayas, a mountain considered sacred to the Tibetans and the Nepalese, Mount Everest is notorious for the exorbitant waste that climbers leave behind, forcing a large-scale volunteer clean-up effort like the one in 2019 that picked up thousands of pounds of trash from along the mountain’s ascent—even if there were tons more left to go. (And of course one side effect of the COVID situation is the restricted travel is good for Everest itself, if also terrible for the local economy.)

Places that cruise ships frequent in the Caribbean — such as Cozumel, Mexico — have been experiencing damage in the coral reefs. The common thread: tourists have no regard for the damage they cause because it isn’t their home they are polluting.

The Galápagos Islands, 3500km north of Rapa Nui in the Pacific, are in some ways a positive case study of more restrictive ecotourism. With 97% of the archipelago’s mammals and reptiles listed as endangered, efforts to raise awareness towards preservation have expanded in recent years.

ABC News feature on the Galápagos conservation efforts to counter the effects of tourism on its incredibly unique ecosystem:

With stern visitor’s rules brought on by programs such as the Galápagos Conservancy and the Charles Darwin Foundation, the Galápagos have made big strides in quelling the damaging effects of tourism. Others can also help out from a distance with the “Adopt a Galápagos Animal” program, where contributions help preserve and protect local wildlife.

Still, the Galápagos, like Rapa Nui, is vastly dependent on tourism to bolster the economy. With an average of 220,000 visitors in 2012 (up from only 2000 in the 1960s), no matter what efforts are made in waste control, the increase in visitors will always leave behind a footprint too big for the locals to handle.

I connected to Sergio Rapu’s story personally as I often look for ways to connect to and give back to my mother’s country of Trinidad and Tobago, West Indies. A powerful draw to the Caribbean country just under 7 miles off the coast of Venezuela are the nesting leatherback sea turtles. My mother tells us of fond memories watching a nearly 400 lb turtle lay 40 eggs on Turtle Beach, Tobago.

With Trinidad and Tobago’s top tourism market in decline (the United Kingdom), the Tobago Tourism Agency Ltd. is actively increasing visibility in its second-highest market, Germany. This could bring in a new surge of tourists and land buyers to the island, inevitably endangering the leatherback sea turtle by increasing foot traffic in its delicate natural habitat.

In addition to the increase in tourism pollution, Trinidad and Tobago also battles global waste washing up on shore due to the plastic garbage patch in the Caribbean Sea. Like Polynesia, the tourist’s appeal of the Caribbean is entirely reliant on the environment being pristine. It’s in the best interest of the local economy for civilians and tourists alike to keep the land clean and be mindful of waste disposal. As a result, the Caribbean Alliance for Sustainable Tourism was formed in 1997, providing guidance to hotel management with waste management toolkits that suggest practices such as increasing revenue for returning recyclables, composting yard waste, and reducing the use of non-biodegradable plastic goods.

While many tourist hotspots have adopted “ecotourism”—a low-impact, sustainable alternative to commercial tourism—at times, ecotourism has actually increased foot traffic to fragile environments, causing the opposite of the original intention of preservation, educating the masses, and having respect for local culture.

Ecotourism could be rebranded as more proactive, involving tourists not only cleaning up after themselves, but contributing to a negative carbon footprint as much as possible by taking part in beach cleanups or other conservation efforts. In the end, it’s the increasing presence of humans that causes disruption to the environment. Government efforts to quell the tourism surge by restricting the number of visitors allowed into the countries might be a more effective alternative than ecotourism in places where increased foot traffic harms the environment.

Heavy-hitting environmentalist and animal welfare documentaries like The Cove (2009), Blackfish (2013), or An Inconvenient Truth (2006), have been a largely effective catalyst for cultural change, as they highlight the scientists and helpers taking action to protect the oceans from pollution and climate change. Eating Up Easter delivers a softer, heart-to-heart approach, illuminating the tight-knit love and respect of the people, all communicated through the peaceful, harmonious lens of island living. When we witness more personal stories, we can see how vital it is to tackle these issues within our own communities. If people want to see cleaner oceans and beaches worldwide, global waste reduction efforts begin in the home.

To collectively look beyond our living rooms and view the entire Earth as a place worthy of responsibility and care, we can ingrain a larger sense of respect for the places we choose to visit.

The island of Rapa Nui has survived many transformations and has had many unique names throughout its tumultuous history. One local name for the island is fairly poetic, Mata ki te rangi, which means “Eyes looking to the sky.” Perhaps the present day Rapa Nui still have their eyes looking upward, with high hopes of recovering and replenishing the island to its former glory. We should all have such hope for our homes, wherever we may stand.

Satu Runa is a Canadian-American ecofeminist, and writer/director of documentary shorts and fiction. She resides in Los Angeles, CA.