August 27, 2020 by Independent Lens in Beyond the Films

Author Josh Kurz is a science communicator and filmmaker, and the co-creator of the audio program Shabam, which uses a zombie apocalypse to talk about real science.

You might know someone like “Scott.” Fun at parties, has passionate opinions about a wide range of topics; space travel, the Mayan calendar, twerking. But if you drill down into the human condition, you realize after a while that there’s no point in arguing for kindness and compassion because the person you’re talking to — Scott – is really a defeatist. All those things we consider bad for humanity? Misogyny, racism, slavery, torture, war, cruelty—well it’s “all just human nature.”

Which would mean there’s no real hope for the future; no matter how much progress we make or how kind and generous we are to our fellow humans, that, in the end, homo sapiens is doomed, unable to escape our true natures. You end up wondering why Scott is actually at parties if he thinks so little of human beings.

I’d like to offer some thoughts on why kindness and empathy are a truer reflection of what makes us human than pillaging, in a scientific way. And why Fred Rogers’ mantra of having the courage to be kind —as demonstrated so poignantly in Won’t You Be My Neighbor—is so appropriate, especially now. Mr. Rogers often spoke of people who were brave simply by helping others. 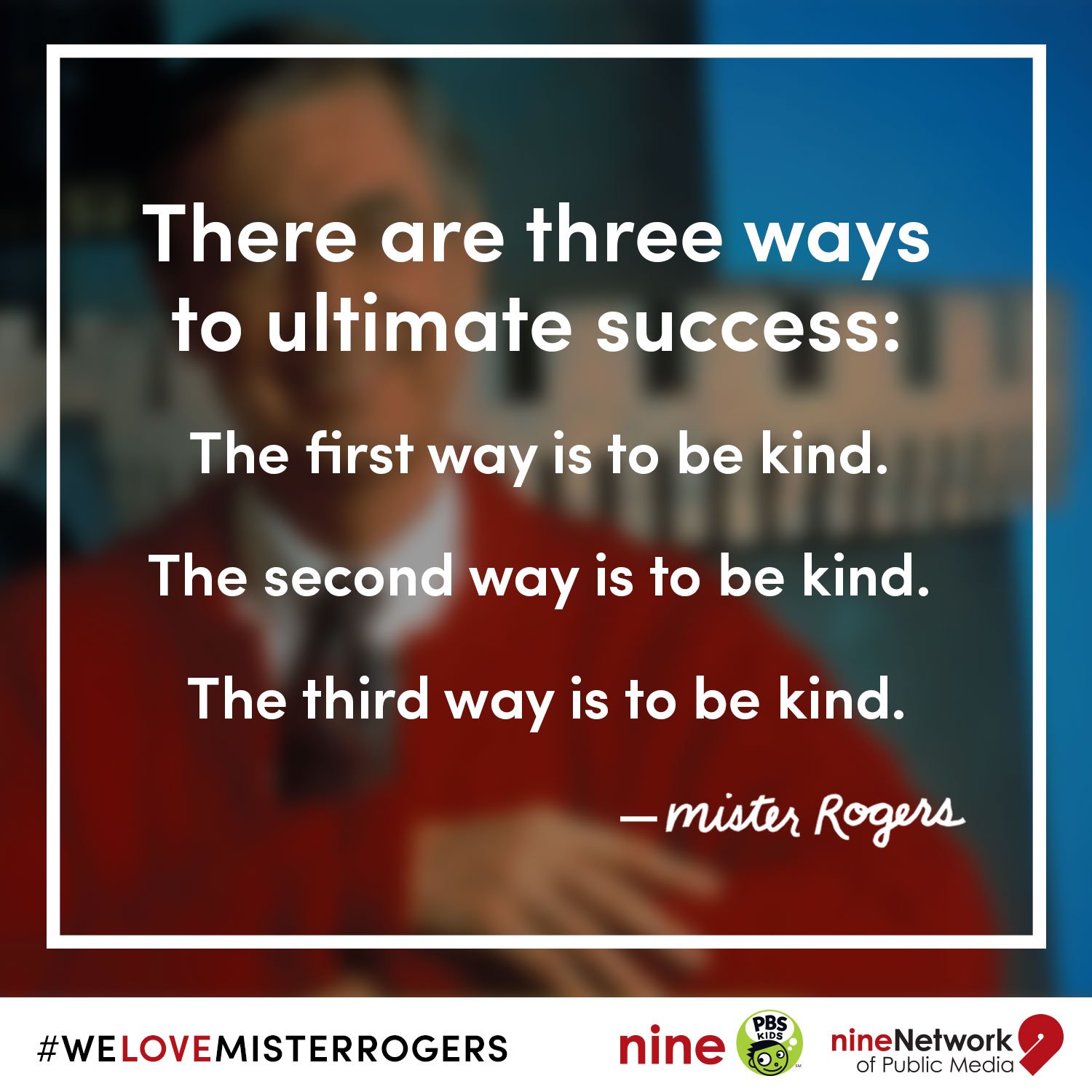 Our brains are products of evolution. And we now know that evolution works by these main mechanisms:

This is why a series of DNA replication errors can lead to dinosaurs in all different shapes and sizes taking over the planet for millions of years only to get wiped out by a comet in a single event. Mutation. Natural Selection. Stuff happened and then mammals took over.

Being a product of evolution means going through a lot of additions and/or deletions—or as psychology Professor Emeritus at NYU Gary Marcus explains, “evolution tends to work with what is already in place making modifications rather than starting from scratch.” There are no completely new organism “designs” that just pop up one day—all organisms are the result of changes and adjustments to previous versions.

What you end up with is a cobbled-together patchwork of new additions on top of old designs or a Kluge (the title of Marcus’s book). And the central point of the book is that our brains are Kluges (a patched-together solution for a problem). “The human midbrain, for example, exists literally on top of the ancient hindbrain and the forebrain is built on top of both,” he writes, and now all these parts have to work together.

The “Kluge” brain is problematic. Marcus explains how this has consequences on how our brains actually do “brain stuff,” like remembering things, having emotions, believing things, using language, and experiencing pleasure.

And what it basically comes down to is this:

There’s a power struggle between the “older” parts of the brain—like the limbic system that produces fear, aggression, hunger, fatigue, and hormones—and the newest evolutionary additions (the neocortex cortex) with its higher reasoning, complex language comprehension, mathematics, and imagination.

This is the thinking part of the brain that also houses your personality and your sense of self-awareness. It’s the part that likes to think it’s in control of the human steering wheel. Sometimes it is.

But other times the brain makes excuses for why it let the older part drive.

The part that evolved last is the most uniquely human, especially the prefrontal cortex.

In his book Sapiens, Yuval Noah Harari argues that the series of mutations that gave humans the singular advantage over every other animal on the planet, including dolphins, is the ability to think about things that don’t exist (stories), tools haven’t been made yet, and cooperation agreements—like plans on how to kill a mammoth. In other words, imagination.

Imagination is what gave us our superpower over every other species. The ability to imagine things is what Harriri argues is the reason why 60,000 Homo Sapiens who are not related to each other can go to a concert together without descending into chaos. (Or at least we used to be able to do this.)

“The best solution I can offer is our imagination and the ability not only to imagine things to yourself but to share your fictions, to invent and spread fictional stories. This is why we can cooperate in our billions, whereas chimpanzees cannot, and why we have reached the moon and split the atom and deciphered DNA, and they just play with sticks and bananas.” —Hariri in an NPR interview

We reached the moon and split the atom because we developed science, the process of examining the world in an objective way that minimizes human error whether through bias or otherwise. Essentially we’ve figured out that the brain is bad at figuring things out… so we figured out imaginary methods to figure things out correctly. (Got that?)

Through science, we’ve discovered that empathy and compassion are keys to this ability to cooperate.

And that empathy is a skill that can be honed, especially at an early age when our brains are still forming.

There’s also plenty of scientific evidence that kindness begets kindness, that kindness makes you feel better when someone else feels better. (As in this Harvard paper on just that, or in the Scientific American.)

These are all uniquely human traits that came about because of the “human” part of the brain. Yes, of course, it’s all connected and I’m simplifying a bit, but the fact still stands that humans took over the planet in less than 100,000 years because of an evolutionary addition that happened in our brains.

And these additions and changes are what make us distinctly human.

While we can’t escape the older parts of our brains because the brain is all connected—we need them even though they can be problematic—arguably the most human part is our ability to resist those problems. We can not only choose between kindness and cruelty, selfishness and generosity, but also can reason why kindness and empathy are rationally speaking better for humans in the long run.

It sounds simple but it’s hard. Because you’re resisting millions of years of evolution. You can even be studying empathy and still have problems with empathy, as in the case with this leading empathy researcher.

In the end, it’s human nature to defy our evolutionary lot. Should we embrace it and choose the hard path?

Have the courage to reason around your limbic system, and use your learning and thinking skills to break down your implicit bias, practice empathy so you can be compassionate.

To channel Mr. Rogers again, it takes courage to be kind—especially in our current climate of internet trolling, tribalism, and self-indulgence. Instead of blaming the human condition on the mistakes we’ve made, we should credit our humanity for getting this far this fast. You know why we’re landing another robot on Mars? Because it’s human nature.

The Birth of the Mind, by Gary Marcus

Born and raised in Brooklyn, NY, Josh Kurz is a science communicator and filmmaker currently living in Los Angeles. He’s the co-creator of the audio program Shabam, which uses a zombie apocalypse to talk about real science. Josh believes there’s power in utilizing unconventional storytelling and humor to break down life’s mysteries. If there’s one takeaway he’s learned from interviewing scientists it is that the world is more complex than we think and we know less than we think we know.