Yamiche Alcindor is the moderator of Washington Week, the Peabody Award-winning weekly news analysis series on PBS. At Washington Week, Alcindor moderates the weekly roundtable discussion of journalists on the program, which broadcasts live each Friday at 8 p.m. ET on PBS stations nationwide.

Alcindor is also a political contributor at NBC News and MSNBC and often appears on shows like Meet the Press, Morning Joe, and Andrea Mitchell Reports.

Alcindor joined Washington Week in May 2021 and is the ninth moderator in Washington Week’s history. Alcindor takes the helm of the program following the three-year tenure of moderator and managing editor Robert Costa who vacated the post in January 2021, and following the decades-long tenure of Gwen Ifill, who moderated the program from 1999 until her death in 2016.

Alcindor also covered the White House for PBS NewsHour between 2018 and 2021. She is currently covering the administration of President Joe Biden in doing so, also covers a range of issues including the impact of the coronavirus pandemic, police involved killings, systemic racism and immigration. During the 2020 presidential election season, Alcindor was a moderator for the sixth Democratic primary debate. Alcindor covered the administration of former President Donald Trump and the impact of his policies domestically and internationally. Prior to that, she covered the campaigns of Donald Trump and Bernie Sanders for The New York Times.

She is the recipient of numerous awards and recognitions for her work, including the 2020 Aldo Beckman Award for Overall Excellence in White House Coverage from the White House Correspondents’ Association and the 2020 Gwen Ifill Award from the International Women’s Media Foundation (IWMF). She is a member of the National Association of Black Journalists (NABJ) and was named the organization's 2020 Journalist of the Year.

Alcindor was born in Miami, Florida, to Haitian parents. She earned a bachelor’s degree in English, government and African American studies from Georgetown University. In 2015, she received a master’s degree in broadcast news and documentary filmmaking from New York University. 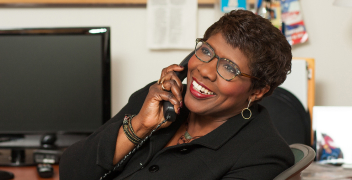