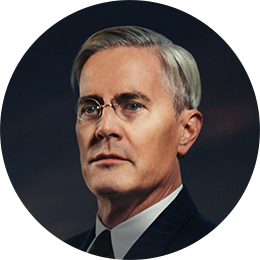 A princess steals the heart of the president of the United States in an epic drama based on the World War II relationship of Franklin Roosevelt and Norwegian Crown Princess Martha. Kyle MacLachlan (Twin Peaks, Sex and the City) stars as Roosevelt, opposite Swedish star Sofia Helin (The Bridge) as the beautiful Martha, who flees the Nazis with her three young children and lives under Roosevelt’s protection. The eight-part series co-stars Tobias Santelmann as Crown Prince Olav and Harriet Sansom Harris as First Lady Eleanor Roosevelt.