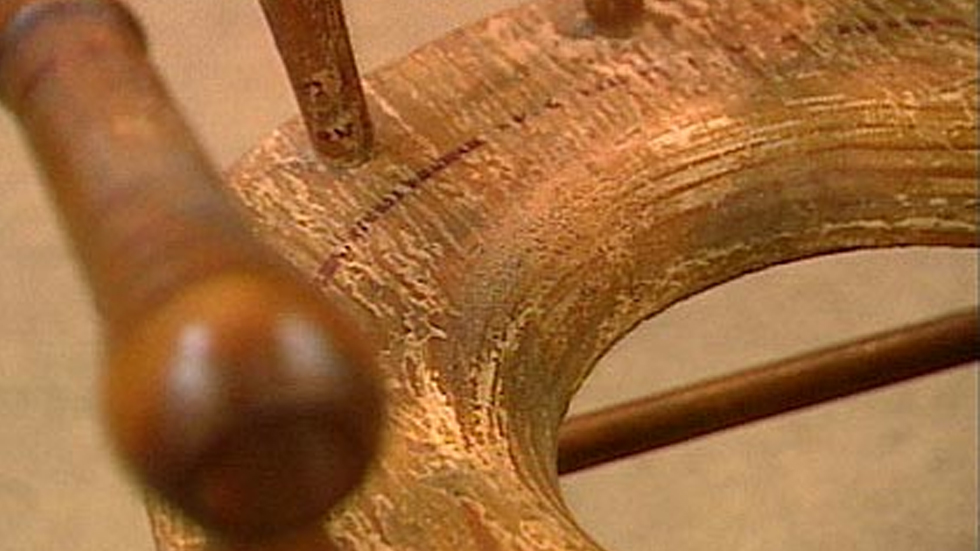 Old paint fades with time — like on this 19th-century child's potty-chair — and that's fine.
Support provided by: Learn more

An expert appraiser reveals what she looks for in antique furniture and discusses tips for keeping it in top condition.

How can owners of antique furniture preserve their finishes—and the value of their antiques?

"The thing to remember," Karen says, "is that the finish in a piece of wood either adds to its value or takes it away." How can owners of antique furniture preserve their finishes—and the value of their antiques?

"Most collectors and dealers say you let it be," Karen says.

The reason to leave antique paints and stains as they are, she says, is that collectors of antique furniture want their pieces to remain as close as possible to how they were originally, which often included a coat of paint.

"Pine country furniture from the 18th century used to be painted blue or a barn red," Karen says. "People think they have to get it down to the original wood. They don't know that in this period people were very vibrant in their use of colors in decoration."

Over time, paint oxidizes. This fades the paint and gives it a mellow look, Karen says. This "dry" look, which is visible in this 19th-century child's potty-chair, is what antique furniture collectors desire.

Even if the paint dries to the point that it begins to crack, it's better left alone. "A little bit of craquelure is absolutely acceptable and gives you a feeling of comfort that it's original," she says. "But beware. There are forgers that can work with heat and can create a craquelure that is not original." Faked craquelure (pronounced "kra-kloor") — a term referring to old, cracked paint — is usually more uniform on the surface of the paint, Karen says, while genuine craquelure is less consistent.

Antique furniture owners need to resist what the owner of this 19th-century chair did. "Somebody has ... put this very bright lacquered finish on the top of it, which is not a look that painted furniture collectors like to see," the Skinner executive says.

Many antique pieces, however, were originally stained rather than painted. In the 18th and early 19th centuries many pieces of American furniture were built with domestic woods such as maple or cherry and then stained to make them look like mahogany, which was imported from foreign shores, and therefore considered more exotic and valuable.

Today, some owners make the mistake of oiling stained woods. "Oil is very bad for wood," Karen says. "It soaks into open grain and oxidizes and can turn the wood black. A good example is my kitchen floor." Karen has used Murphy Oil Soap on her floor and the oils in the product have turned the wood black wherever the floor's varnish was gone.

The one addition to stained wood that Karen and conservators don't mind is wax. "Wax creates a protective surface on the piece," says the Skinner executive. "When you put a sweating glass on a waxed table you don't get a ring." Wax is also easy to remove, a feature that all furniture conservators appreciate. Karen recommends solid waxes, such as paste wax, butcher's wax or even French polish, because these all contain bees' wax. Karen recommends you stay away from liquid waxes though, because they often have the damaging oils as an additional ingredient.

But what should you do with the antique piece that's already been stripped, varnished, or oiled? Karen says that the choice is yours. You could leave it as is, or if you want a piece that looks nicer, you could have a restorer make it look like the original. Karen points out, however, that restoring a damaged piece usually does not increase its value.

"The trade market is filled with compromised pieces," Karen says. "That's what we see the most often."

Then again, sometimes it can be a relief to own a piece that isn't in its original condition, Karen says, because you need not worry about what happens to it. Karen, who has two teenage sons, has a Victorian drop-leaf dining table in her kitchen that was stripped of its original finish. She bought the table for around $400—about the same price she might spend on a new table. She occasionally waxes it, but otherwise worries little about the damage done to its surface.

"I don't get crazy about the top getting beat up," she says. "So what if we just spilled Gatorade on it? We'll clean it up tomorrow."

Old paint fades with time — like on this 19th-century child's potty-chair — and that's fine. The owner of this 19th-century chair applied a bright lacquered finish, decreasing the value to a collector. This table was waxed — which is fine. Collectors don't mind wax, which protects wood while still remaining easy to remove. Find a restorer to fix damaged finishes.
About the Author Dennis Gaffney
Dennis Gaffney is a freelance writer in Albany, New York. He has been a contributor to Antiques Roadshow Online since 1998.
More from PBS