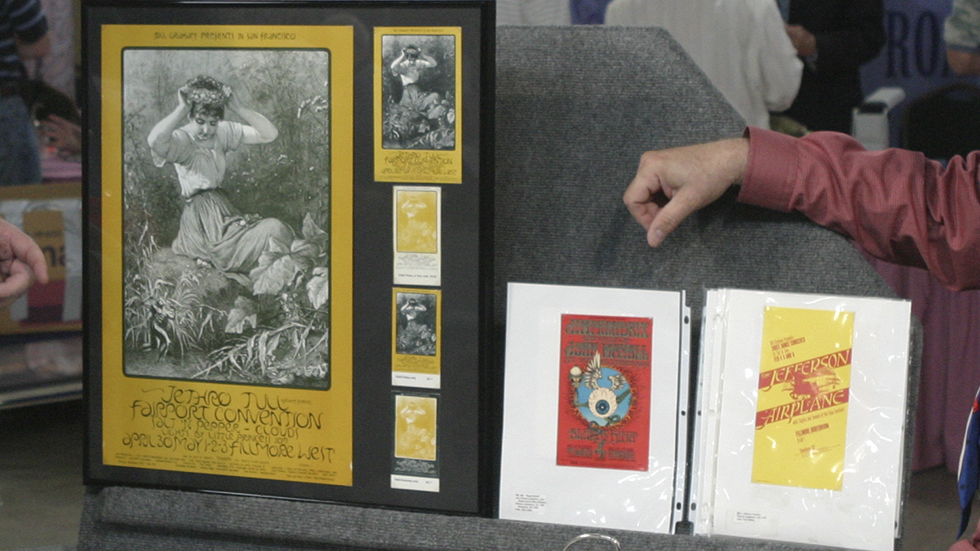 He helped create the whole psychedelic art and music movement.

At the 2003 Oklahoma City ROADSHOW, appraiser Rudy Franchi came across a collection of handbills and posters advertising the concerts that were promoted by Bill Graham, the rock music impresario.

Graham owned the Fillmore, San Francisco's premier club of the 1960s and also Fillmore East, which he opened in New York City in 1968. He used both clubs to launch the careers of many of the seminal acts of the era, including the Grateful Dead, The Who, Jimi Hendrix, Otis Redding, Cream, Jefferson Airplane, Santana, and the Rolling Stones.

"I consider him an artist," said Rudy of Graham. "He helped create the whole psychedelic art and music movement." Graham was known for his ability to hold his own in the presence of any rock star, as well as for his temper, his wit, and his generosity.

Bill Graham was born to Jewish-Russian parents in 1931 and was orphaned soon after. He was evacuated to France in 1939 to escape the Nazis and was then sent to the United States in 1941 where he lived with a foster family in the Bronx. He served in the U.S. Army during the Korean War and later drove a taxi, waited on tables, and made a failed attempt to become an actor. In 1967, just prior to the Summer of Love, he headed to San Francisco. There he found his calling as a promoter. He first managed the San Francisco Mime Troupe and followed that up by presenting rock bands in concerts at the Fillmore.

Some of the people who hung around the Fillmore in San Francisco were psychedelic artists that Graham hired to create artwork for the promotional material for the concerts. Many psychedelic artists, including Wes Wilson, Stanley Mouse, Alton Kelley, and Rick Griffin made their careers spinning out art for Graham that captured the essence of the era's music.

The psychedelic posters became so popular among young rock fans, Rudy says, that those hired to staple the posters on telephone polls soon were selling them to stores who wanted to hawk them.

"The brilliant thing about the posters and the graphics is that they were so convoluted," Rudy says. "You couldn't quite make out what they said from a distance so you came closer and closer and ended up reading all of the huge amount of information contained in the swirls of color and type," Rudy says. "It was a brilliant piece of marketing, really."

After Graham established himself, he put together benefit rock concerts to raise money for all kinds of causes, including AIDS research, the Haight Ashbury Free Medical Clinic, Amnesty International, and the first group he ever promoted, the San Francisco Mime Troupe.

Mickey Hart, the drummer for the Grateful Dead, said that he and Graham worked together in the same club in the 1950s. Hart was a soda jerk; Graham was a waiter.

"Bill was a ruthless business fellow," Hart told Rolling Stone magazine following Graham's death in a helicopter accident in 1991. "He played hardball, and every game was the World Series, but he did things that most people don't know about. He planted trees in Israel for my grandmother. He co-signed on a loan for my first car when me and Bob Weir [the lead singer of the Grateful Dead] were hitchhiking to the Fillmore .... I asked him to give me some money for research [for Hart's two drum books], which took ten years, and he said, 'Why? Why should I give you money for a drum book, of all things?' I said, 'Because you love drums, Bill, and what else will you do with your ----ing money.' So he gave me the money for the drum books."

And that was Bill Graham.