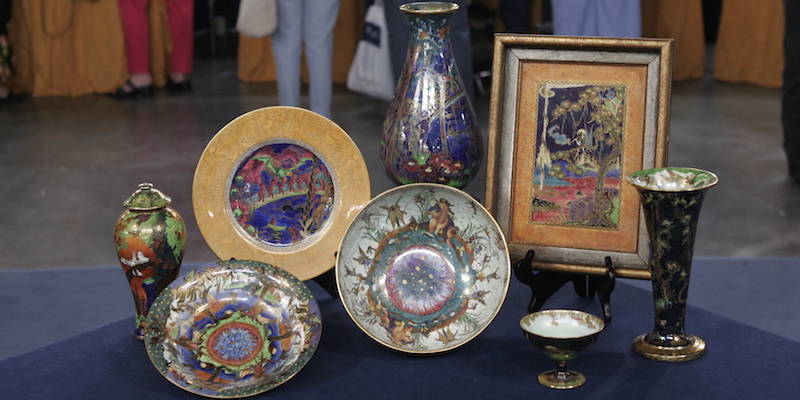 Daisy Makeig-Jones, designer of Wedgwood's famed Fairyland Lustre Pottery, was sacked in 1932, because "she got a bit out of hand." But what really happened?

While at the Houston ANTIQUES ROADSHOW, independent New York City antiques dealer Nicholas Dawes appraised a collection of vases, plates and bowls called Fairyland Lustre, a fanciful Wedgwood line introduced in 1915. The line was designed by an eccentric woman named Daisy Makeig-Jones, an artist who talked her way into a job as an apprentice painter for Wedgwood, and then convinced management that she could design, too. All went well until 1929, when Wedgwood discontinued Fairyland Lustre, and then sacked Makeig-Jones soon after.

"She got a bit out of hand," as Nick explained it during the on-air segment. But what really happened to Makeig-Jones?

The story begins in 1909, when Makeig-Jones asked Cecil Wedgwood, an heir of Josiah Wedgwood and a partner in the firm, to hire her as an apprentice painter. Two years later, Makeig-Jones, clearly talented, began to design tableware, and her attraction to the fanciful quickly became clear. In 1913, she produced Oriental dragon patterns. She went on to design lustre patterns of fish, hummingbirds, fruit, and other natural subjects, and then she moved on to her flamboyant Fairyland Lustre design, released in 1915, a year into the war then raging in Europe.

That line included wild combinations of bright colors, including greens, oranges, blues, deep purples, and ruby reds. She would up the intensity of her colors even more with a subsequent line, known as Flame Fairyland Lustre. These lines were just what were needed at Wedgwood, which was in a slack period when the Fairyland series was released. "Many Europeans were looking for something to escape from the horrors of war," explained Nicholas, who describes the goblins and floating fairies in the pottery's neon landscapes as "escapist stuff, real fantastical."

Nicholas notes that the rise of Makeig-Jones within Wedgwood was unusual not only because she was a woman, but also because she rose from within the company's ranks, an exception to the well-known designers that Wedgwood normally brought in from outside. Her Fairyland line proved immensely popular across the Atlantic during the Roaring 1920s, providing Wedgwood a popular and pricey product with which to penetrate the lucrative American market. But soon Makeig-Jones' Art Nouveau fairies faded from fashion. Nicholas says it was no surprise that the line was discontinued in 1929.

"It had been around long enough that people were getting tired of it," he continues, "and with the Depression, the American market just dried up." Wedgwood hired a new art director and moved on to a more austere modern style, abandoning the multi-colored lustrous glazes, which were expensive to produce, a luxury that couldn't be afforded during the economic downturn of the 1930s.

Besides, by all contemporary accounts, Makeig-Jones had grown "too big for her station," Nicholas says. "She acted as if she was the president of the company and would march around telling people what to do. Eccentric can be good in a designer, but she quickly became a difficult employee. She seemed more interested in fairies and elves and the mythical world than the real one. She was not willing or able to do anything different. What she was doing became passé, so her number was up." In April 1931, she was asked to retire, left in a fury, and her designing days were over. She died in 1945.

But like many talented artists, she left behind a creative legacy that has long outlived her. Nicholas estimated that the collection of 17 Fairyland Lustre pieces the guest brought to the Houston ROADSHOW are worth at least $25,000 at auction, and perhaps as much as $35,000 — an indication of just how treasured the line is to this day. "What she did was unique," says Nicholas, "and no one had — or has — done anything quite like it. It was virtuoso work."

For more on Daisy Makeig-Jones and her work see: