Thomas Hart Benton — A Man and His Mural 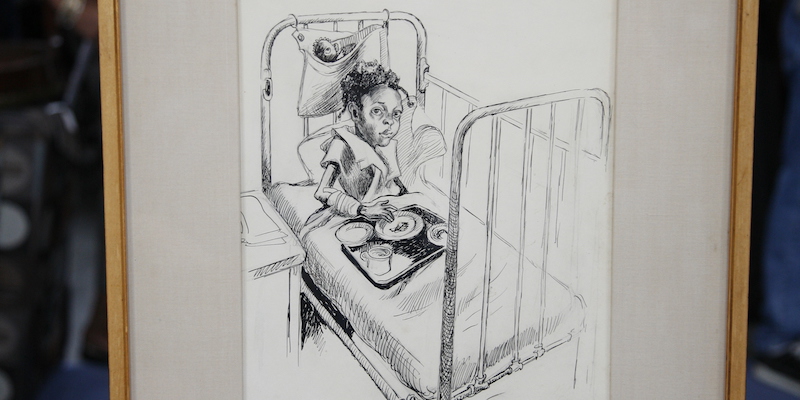 A closer look at Thomas Hart Benton's grand but controversial 1933 mural, "Parks, the Circus, the Klan, the Press."

At the Baltimore ANTIQUES ROADSHOW in June 2007, a woman arrived with a drawing of an African-American child in a hospital bed sketched by the great American regional muralist Thomas Hart Benton. The image is innocent, but it was sketched for a far larger 1933 mural that has been controversial through the years because it depicts, among many other things, the Ku Klux Klan and a burning cross.

"That particular mural will probably always be controversial," says Sherry Rouse, the curator of campus art at Indiana University. Benton did the sketch for Cultural Panel 10, called "Parks, the Circus, the Klan, the Press," which was part of a sprawling mural depicting Indiana history that he painted for the Indiana exhibit hall at the Chicago Century of Progress World's Fair in 1933 (the full mural can be seen here). The mural was the largest of Benton's career — 12 feet high and 230 feet long, about as long as a small city block. It was described by one newspaper at the time as "possibly the longest unbroken and continuous mural composition ever painted," a claim that Benton would proudly repeat. The mural depicted some of the state's key agricultural and industrial products, such as corn, pork, coal and steel, the state's contributions to science and the arts, and historical landmarks. 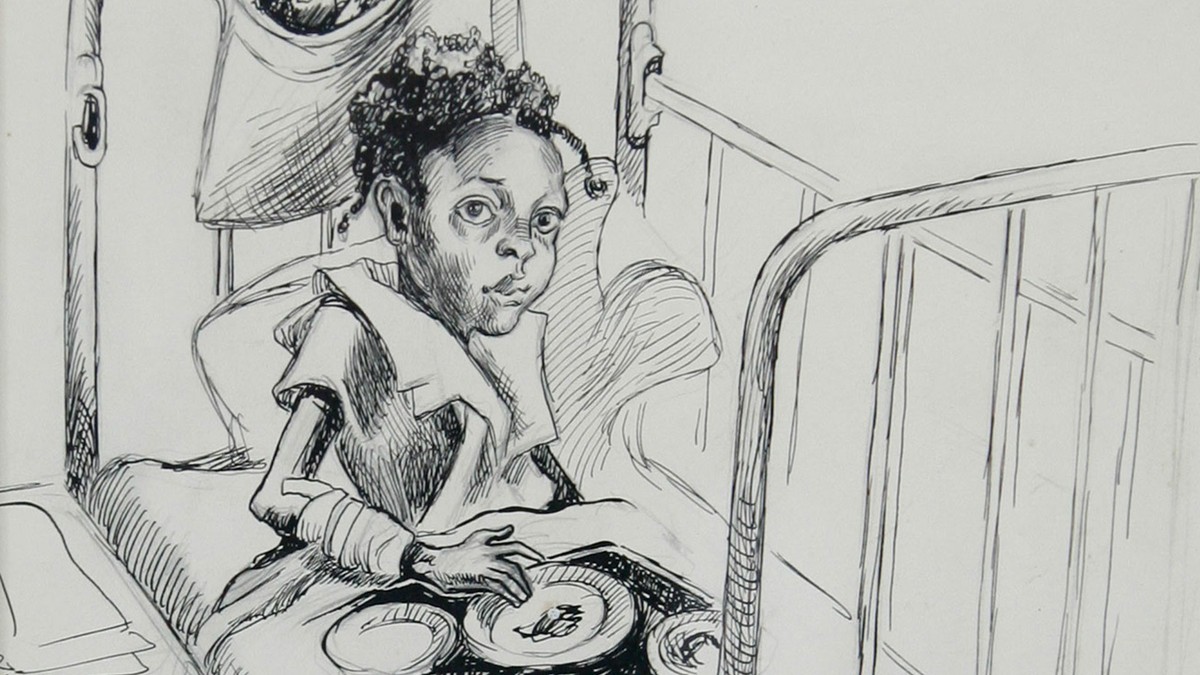 Benton sketched this girl at Indianapolis City Hospital before he painted her into his controversial mural.

Although he was at first appalled by the scope of the project, and the short time available to complete it — only six months — Benton tackled it with his trademark gusto. The mural and the selection of Benton were controversial from the day the mural was commissioned. Some conservatives called Benton a Communist, citing his populist images of ordinary people, workers, and strikers. Others disapproved of his style, with its exaggerated, sinewy bodies and bright colors. Some Indiana artists were upset that he was not a native of the state. In the state legislature, pamphlets circulated with the question, "Do you want this artist, already judged incompetent by New York, to represent our state at the World's Fair?" That was a reference to his New School mural, which was done in 1930 and was controversial for its gritty portrayal of New York City, using bright colors to represent steelworkers, tawdry nightclub dancers, and crammed subway cars.

But the man who had first selected Benton for the project, Colonel Richard Lieber, director of the Indiana Department of Conservation, defended him publicly, explaining that he was the son of a Missouri congressman and the grandnephew of the famed U.S. senator from Missouri whose name he bore. (Lieber is actually depicted in overalls planting a tree in the lower right-hand corner of this panel.) Benton committed himself to the project, traveling the state for months, visiting local landmarks and sketching people wherever he went. Then he started painting, covering 38 feet a day, on average, according to one contemporary. He claimed to have painted the entire mural in 62 days. "I hardly know how I did it," Benton later said.

Controversy: The Klan and Cultural Panel 10

Benton included the Ku Klux Klan scene in Panel 10 because he wanted a realistic portrayal of Indiana history, and the national white-supremacy movement loomed large in the Indiana of the 1920s. When the Klan's influence peaked in 1924, as many as 40 percent of all native-born white men in the state were paying dues to the Klan, and it was a powerbroker that elected most local and state officials. 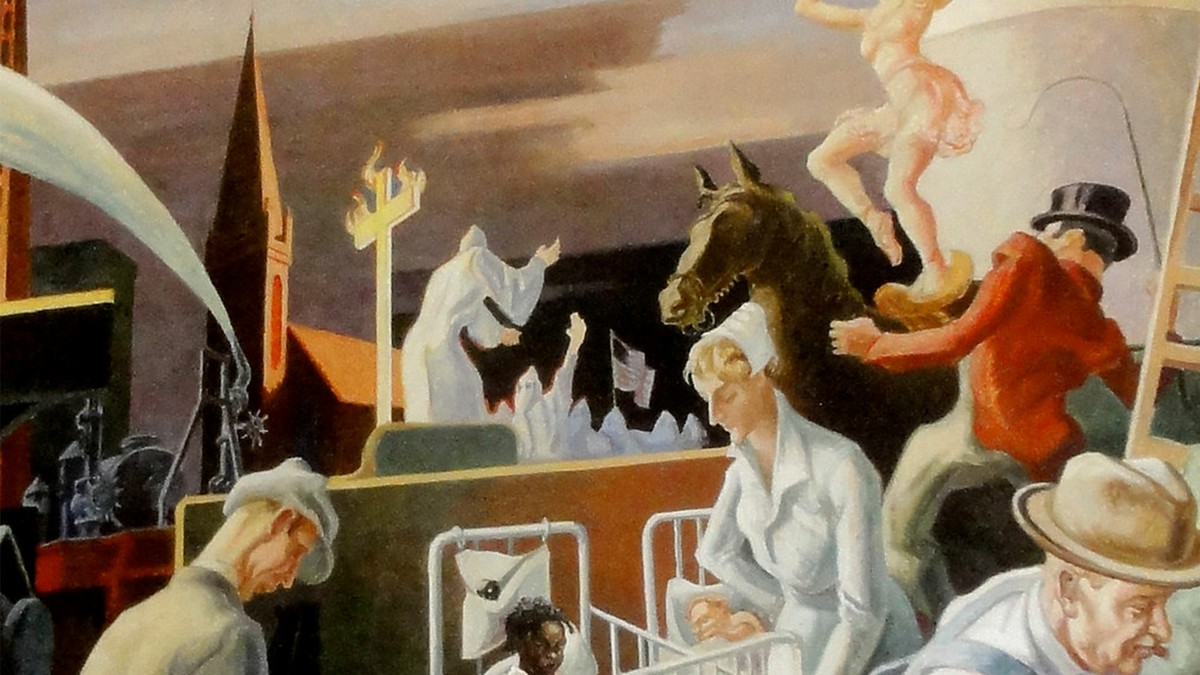 In the part of his mural titled Cultural Panel 10, "Parks, the Circus, the Klan, the Press," Benton depicted the Klan—but also the press, which ultimately helped bring the Klan down. (Image source: Bart Everson via Flickr)

Lieber wanted the image pulled, but Benton, having a larger purpose in mind, prevailed. In his 1933 essay "A Dream Fulfilled," Benton wrote that "history was not a scholarly study for me but a drama," and the drama in Panel 10 included the demise of the Klan in Indiana. Benton had learned that the power of the Klan was broken by the press, particularly the Indianapolis Times, which uncovered Klan corruption, murder, and bribery, winning the paper a Pulitzer Prize in 1928. These forces are represented by the inclusion of a reporter, a photographer, and a printer on the lower portion of the panel.

At the center of Cultural Panel 10 Benton painted a white nurse attending two children, one white and the other black—the latter being the girl depicted in the sketch brought to Baltimore. Apparently, Benton made a trip to Indianapolis City Hospital (now Wishard Memorial) looking for people to sketch for the panel. 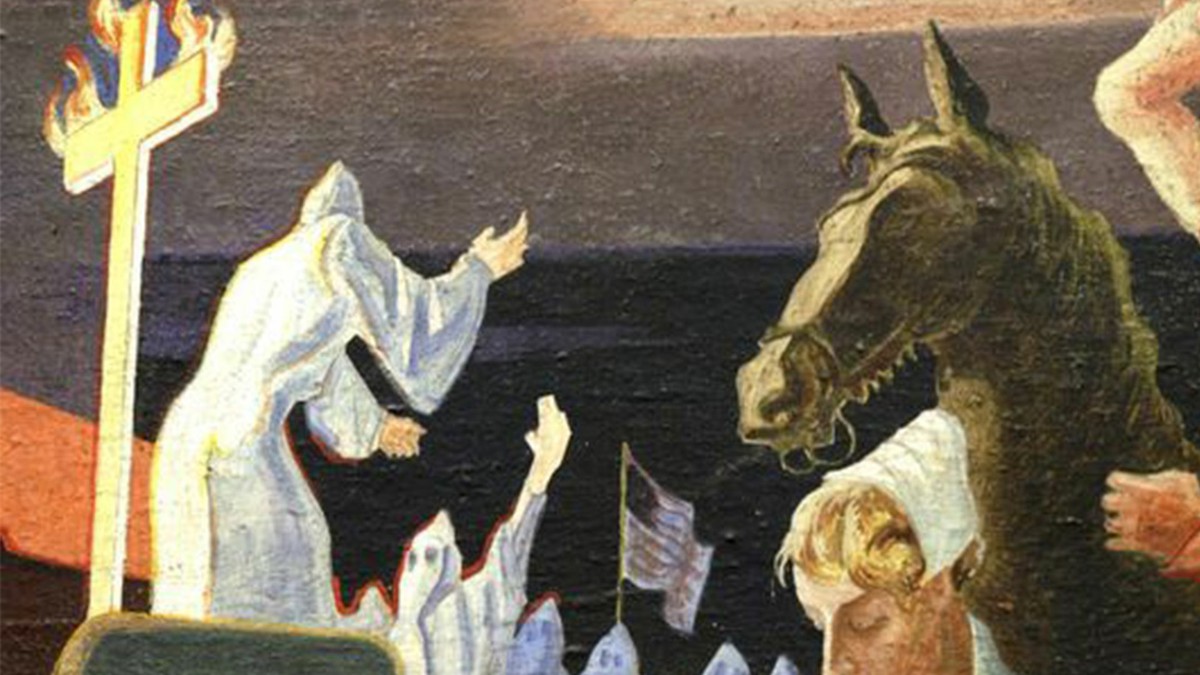 This is the image of the Ku Klux Klan that has caused strong reactions at Indiana University ever since it was first unveiled in 1941.

Benton's visit was described by Dr. Philip B. Reed, who at the time had been an assistant superintendent at the hospital, in a reminiscence he wrote for the Indiana Alumni Magazine in 1991. Dr. Reed remembered Benton's rapid tour and his "obvious sense of purpose" in his visit to the hospital "seemingly interested only in finding proper subjects for sketching." In the children's wing of the hospital, Benton found "exactly what he wanted," a white nurse administering to a black child with a bandaged arm. At the time, an assistant of Benton's told Dr. Reed that the artist had chosen the integrated hospital scene because he "wants to make a strong statement for tolerance and against bigotry." Benton's history of Indiana included the Ku Klux Klan, but his mural showed that its hatred had been deposed by tolerance.

"He probably went in there knowing what he was looking for and may have even partially set up the scene," says Nanette Brewer, the Luciene M. Glaubinger Curator of Works on Paper for Indiana University's Art Museum. Brewer notes that Benton did hundreds of life drawings and composition studies over four months while preparing to paint the mural for Indiana—drawings that were usually sketched in pencil.

"Some have coffee mug stains," Brewer says, as well as marks from tobacco juice or food. Some were even stepped on and bear the imprints of shoes. "They're clearly working drawings." Only a few, she said, were traced with pen — as the one in Baltimore was — and they were usually not signed, although the one in Baltimore was. Many of the drawings, done on cheap paper, were lost or destroyed. The Baltimore one had been found behind a Monet reprint in a trash heap.

After the World's Fair, the mural languished at the state fairgrounds in Indianapolis until 1939, when Lieber and the new president of Indiana University, Herman B. Wells, worked with then-governor Cliff Townsend to have the murals donated to I.U.'s Bloomington campus. Most of the panels now reside in the University Auditorium's grand lobby, and the mural's panels are now considered among the most treasured art at I.U.

The Ku Klux Klan scene Benton's "Parks, the Circus, the Klan, the Press" mural still upsets some students who encounter it in the classroom, Woodburn 100, where it hangs today. In 2002, the Black Student Union at the university pushed to have the panel removed from the classroom, but it was determined that to do so would have damaged it. "Every four or five years people say, 'What is the Ku Klux Klan image doing there?'" says Rouse, the campus art curator. "They see the image and some students get irate... The mural's a challenge, but it causes people to think, and that's what the university is here for."

On September 29, 2017, Lauren Robel, Indiana University's provost and Val Nolan Professor of Law, wrote a letter addressed to the IU Bloomington community regarding the impact of the mural on the student body, faculty and staff, and what the university planned to do to address growing concerns.

First, Robel noted that Benton’s intention in adding Ku Klux Klan imagery was not to honor them but to “call attention to something that is deserving of our condemnation.” Even nearly a century after the murals were created, they “serve as a vivid reminder of the strength and resiliency of a community that puts its trust in thoughtful reflection and dialogue about its past, present, and future.”

Yet, Robel agreed that despite knowing the historical context and significance of the intentions behind the murals, the imagery in the classroom does not exactly contribute to a comfortable learning environment.

Robel acknowledged in her statement that there had been at least eight different instances since the 1980s where “diverse committees of faculty, students, and staff” had previously met to discuss if a new course of action should be taken when introducing new students to the murals. The answer each time was to educate.

Yet, according to Robel, having each class that meets in Woodburn 100 participate in a session about the murals may not always be the best use of the students' time, especially for those who have multiple classes that in the room. Further, some faculty without the relevant academic background did not feel that they could effectively lead such discussions.

Towards the end of her statement, Robel announced that starting in the spring of 2018, Woodburn 100 would no longer be used as a classroom. Instead, the room is to be used as a lecture hall, art gallery, and a space to hold educational seminars.

Robel concluded her statement by saying, “The Benton Murals are a national treasure. … Our primary mission is to teach students to think critically and deeply about the world, and great art is an important route to that end. … We will continue to strive for this ideal, and challenge each other to think intensively and critically about art, history, diversity, and inclusion, and what it means to be a citizen of this university, state, and the world. Benton's work deserves no less.” 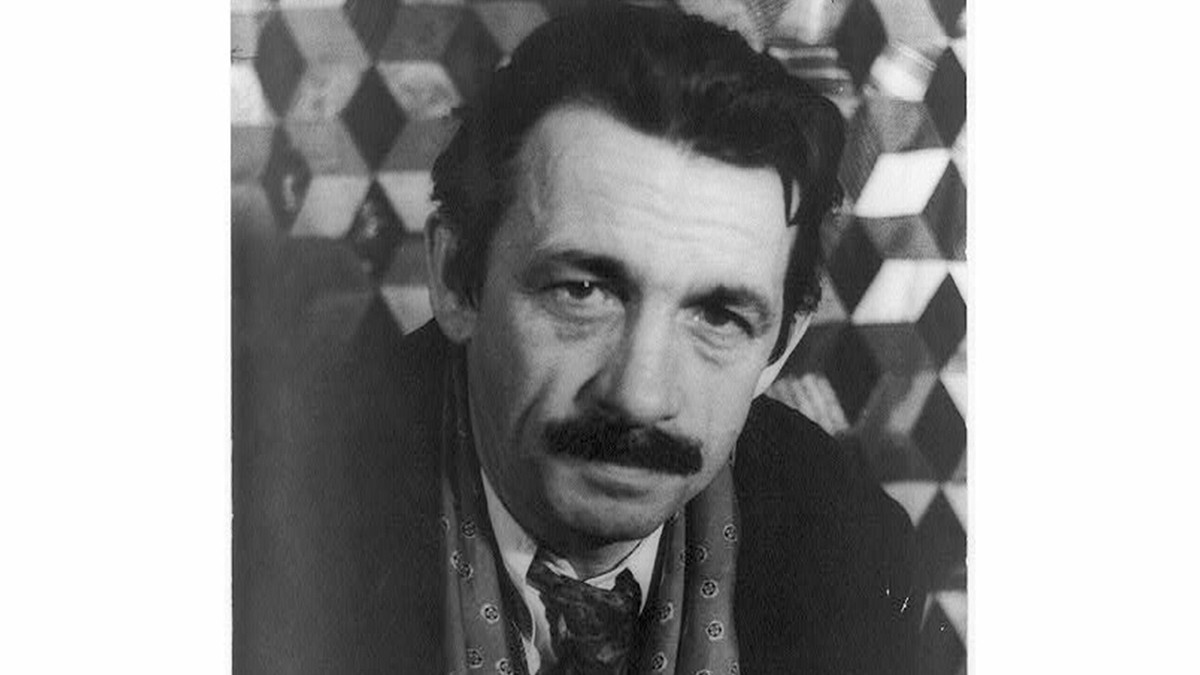 This article was based on information from the book Thomas Hart Benton and the Indiana Murals, by Kathleen A. Foster, Nanette Esseck Brewer, and Margaret Contompasis, Indiana University Art Museum and Indiana University Press, 2000.