The Story of the Dionne Quintuplets 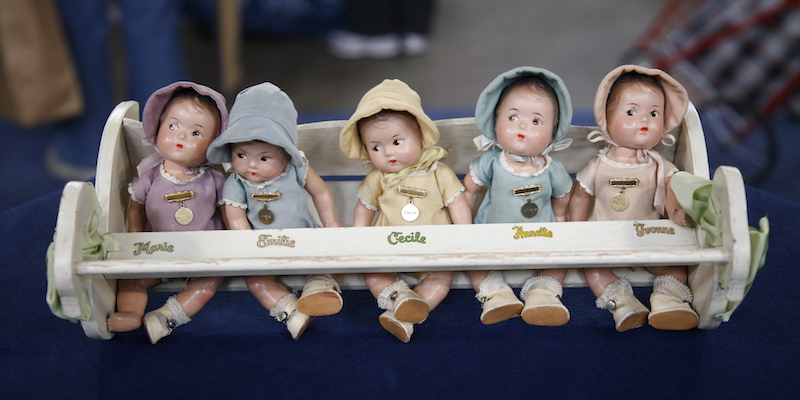 The dolls sure are cute, but the Dionne quints' real-life story is a tragic one.

On May 28, 1934, on a farm in the village of Corbeil, Ontario, near the Quebec border, a French-Canadian mother, Elzire Dionne, gave birth to five identical girls—Annette, Emilie, Yvonne, Cecile, and Marie. Born at least two months prematurely, each baby was small enough to be held in one hand; together they weighed only 14 pounds. Few expected they would survive—even their father did not think they would. But they did survive. Women from nearby villages brought breast milk, the Canadian Red Cross sent nurses and an incubator, and they became the first quintuplets known to have survived infancy.

Soon the world was referring to the Dionne quintuplets as "miracle babies," and they became a world-wide symbol of fortitude and joy during the Great Depression. All kinds of Dionne goods were marketed—including dolls made by the Alexander Company that showed up at the Wichita ANTIQUES ROADSHOW in July 2008. 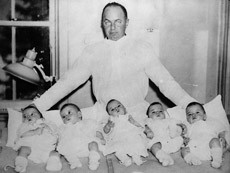 Ontario premier Mitchell Hepburn posed for a photo with the Dionne babies in 1934. (Image source: wikipedia.com)

The girls themselves became a tourist attraction. By 1937, about 3,000 visitors were passing daily through the "Quintland" hospital compound where the sisters were being cared for, bringing in an estimated three million tourists between 1934 and 1943. Hollywood exploited their fame, and four movies were made about them in the 1930s—all with happy endings.

But the real lives of the Dionne quintuplets were largely unhappy. On May 27, 1935, the provincial government of Ontario had taken the five sisters away from their parents, after their father, Oliva, signed a contract with promoters to exhibit the girls at the World's Fair in Chicago. Although Oliva cancelled the contract a day after he signed it, the authorities stepped in anyway to protect the babies, they said, from germs, potential kidnappers, and exploitation.

Yet it was in the custody of the state that the girls became Canada's largest tourist attraction. During the girls' infancy, nurses would take them to a nursery balcony and show them one at a time to a crowd below, their names written on a card. In the media, the girls' upbringing was characterized as privileged, with round-the-clock nursing and a swimming pool and playground all their own. But in reality their playground was surrounded with glass that allowed visitors to view them three times a day. From the inside, the glass was covered with fine-mesh screens to hide the viewers, but the girls could see the shadows of the spectators. 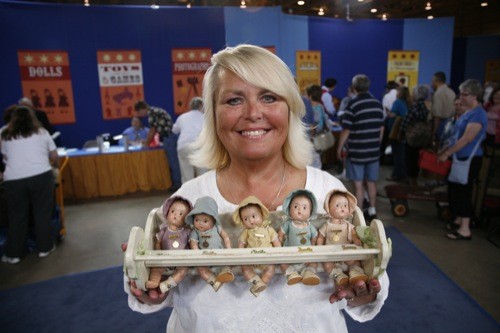 Composite dolls manufactured in the 1930s by the American company Madame Alexander, depicting Marie, Emilie, Cecile, Annette, and Yvonne Dionne, brought in to the Wichita ROADSHOW in July 2008.

"We knew they were there," Cecile said later. In their 1963 autobiography, We Were Five, they wrote of being isolated from others during their upbringing, only permitted to leave the compound a few times. "We dwelt at the center of a circus," they wrote. "A carnival set in the middle of nowhere." According to some estimates, Quintland brought in as much as $500 million to the Ontario province in less than a decade.

"Money Was the Monster"

The girls were used in all kinds of advertisements, including those for Madame Alexander dolls, Quaker oats, Palmolive liquids, Bee Hive golden syrup, toothpaste, war bonds. While tourist parking and admission to the Quintland hospital were free, a store there generated millions of dollars for the province of Ontario, at times keeping the province itself from going bankrupt. The funds were generated through souvenirs such as postcards, dishes, and the Dionne dolls (which are still widely traded today online as well as in the newsletter of the Dionne Quintuplet fan club). Souvenir stands cropped up near their home selling fertility stones—taken from the farm—for 50 cents each; even their father sold them. The quintuplets celebrated holidays early so photographs of them carving pumpkins for Halloween or sitting on Santa's lap could be sold to newspapers and printed on the holiday.

"Money was the monster," they said in We Were Five,"So many around us were unable to resist the temptation." Although their parents lived across the street from Quintland, the couple felt unwelcome there, and became infrequent visitors. "We didn't know each other," Cecile recalled.

At age 9, the Dionne couple won the girls back after a bitter custody battle, yet the girls' new home was "the saddest home we ever knew," they later wrote. They didn't perceive their parents as saviors from Quintland; they came to see their mother as unloving and their father as controlling, even tyrannical. Their parents acted as if "they had been partners in some unspoken misdeed in bringing us into the world [and] we were drenched with a sense of having sinned from the hour of our birth." The girls later admitted that they all longed to have been born alone rather than as five.

"Who could ever count the times we heard, 'We were better off before you were born, and we'd be better off without you now?'" they wrote. They were asked to do more chores than the couple's five other children and served the rest of the family their meals.

At age 18, the Dionne sisters left home, breaking off nearly all contact with their family. Emilie became a nun and died of a seizure in 1954. Three married and had children, but divorced. Marie died of a blood clot in 1970. In the mid-1990s, the three remaining sisters—Annette, Cecile, and Yvonne—wrote in their book The Dionne Quintuplets: Family Secrets that their father had abused them when he took them alone in the car. The girls were afraid to bring up the issue with their mother, but they did tell a school chaplain at the time. Annette said the advice he offered them was to "wear a thick coat when we went for car rides."

Despite the enormous revenue generated by the quintuplets as a public curiosity, by 1941, when the girls were 7, only $1 million had been put in their trust fund; when they turned 21 and became eligible to receive the funds, only $800,000 remained. Their sheltered life did not prepare them for the real world, and when they were on their own Cecile said the girls had difficulty distinguishing a nickel from a quarter.

What funds they were provided eventually disappeared, and when Annette, Cecile, and Yvonne reached their sixties, they lived together outside Montreal on a combined income of $746 a month. In 1998, they asked the Canadian government to compensate them for the trust fund money that had been lost or taken. The government's first reply included an offer of $2,000 a month, but after a public outcry, a $4 million settlement was reached.

That same year, when Bobbi McCaughey gave birth to the world's first surviving septuplets, the sisters wrote her an open letter published in Time magazine. "We hope your children receive more respect than we did," they wrote. "Multiple births should not be confused with entertainment, nor should they be an opportunity to sell products." Yvonne died in 2001, leaving Cecile and Annette as the two surviving sisters.

We Were Five: The Dionne Quintuplets' Story, from Birth Through Girlhood to Womanhood, by James Brough. Simon & Schuster, 1964.

The Quints' Christmas Comic Strip, A 1940 comic strip in which the Dionne quintuplets help save Christmas, reprinted on "The Stripper's Guide" blog, a Web site about the history of the American newspaper comic strip.