Why Were the Younger Brothers in Jail? Plenty of Reasons 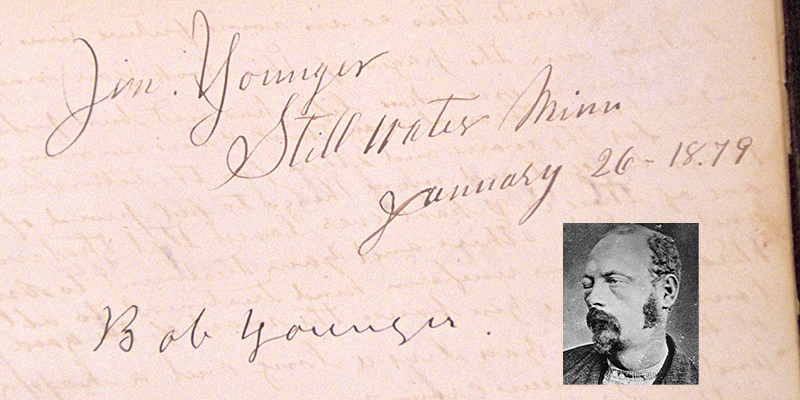 For a decade after the Civil War, the James-Younger traveled the countryside, robbing, killing, and spreading mayhem.

When Cole Younger wrote his lengthy note in what is now Peg's autograph book, appraised by Jerry Patterson at the Albuquerque ROADSHOW in July 2002, he was incarcerated in the state prison in Stillwater, Minnesota, for first-degree murder, to which he had pleaded guilty. While neither he nor his brothers ever achieved the legendary status of their ringleader, Jesse James, the gang they belonged to is properly known as the James-Younger gang: the Younger clan contributed four members to this roving criminal enterprise. Despite Jesse's pre-eminence, and thanks to Cole and Jesse's ceaseless posturing as misunderstood champions of the people, by the time Cole and Jim Younger were paroled in 1901 (Bob Younger died of tuberculosis while still imprisoned), they were fully fledged folk heroes. Securing the signatures of three Younger brothers and hosting one of them for dinner would have been quite a coup for Peg's great-grandfather. The excellent condition of the autograph book and the celebrity of the men who signed it ensured that it would remain a fascinating keepsake for many years.

For a decade after the end of the Civil War, the James-Younger gang carried on as they had during, and even before, the war — traveling the countryside, robbing, killing, and spreading mayhem. They'd grown up in Missouri during a time when that state was a battleground in the national debate on slavery, and were accustomed to violent conflict. Before the war began, militias on both sides of the slavery issue took up implements of destruction, burning down farms throughout Missouri and Kansas and intimidating those they disagreed with. The Jameses and the Youngers, distant relations by marriage, all joined up with irregular Confederate militias. Cole and Frank James, Jesse's older brother, were participants in the Lawrence Massacre, in which the bushwhackers under William Quantrill slew most of the male population of Lawrence, Kansas, and burned the town to the ground.

After the war ended, the Youngers and Jameses joined forces and began their career in crime, which they considered (or claimed to consider) an extension of the Civil War. In letters to sympathetic newspaper editors, Jesse proclaimed himself and his outfit to be oppressed Southern victims of Yankee aggression, and American Robin Hoods who stole from the rich and gave to the poor. For 10 years they robbed banks, wiping out savings accounts, and trains, in which they killed uncooperative engineers; but the final act of the James-Younger gang was the botched robbery of a bank in Northfield, Minnesota, in September 1876, during which the citizens of the town took up rifles and drove the thieves out of town. In the aftermath, the Youngers would be arrested.

The robbery went wrong from the beginning: at least some of the gang had spent the day drinking whiskey at a Northfield saloon, drawing so much attention to themselves that before they'd even entered the bank, many in Northfield suspected what they were up to. Once inside the bank, their intoxication seems to have caused them to make a series of mistakes, such as not noticing that the vault, which they commanded the bank's employees to open, was already open. As the citizens of Northfield started firing on the lookouts posted outside, the bandits inside the bank panicked and needlessly killed a clerk named Joseph Heywood, whom they'd already beaten into a state of half-consciousness.

As they fled the citizens of Northfield, the gang — shot to pieces and with only $26 of the $15,000 they'd hoped to steal — eventually split up. Frank and Jesse escaped to continue their criminal career, but the Younger brothers surrendered to a posse in the woods of Hanska Slough, on the Watonwan River. Cole had been shot 11 times; Jim's upper jaw had been blown off. Bob, Jim and Cole were jailed, tried for the murder of Joseph Heywood and sentenced to life in prison. To this day, in the week after Labor Day, Northfield celebrates the thwarted robbery with the Defeat of Jesse James Days festival.

Upon his parole in 1901, Cole once again teamed up with Frank James, this time in a Wild West revue called the Cole Younger and Frank James Historical Wild West Show. Thereafter, he never missed an opportunity to pontificate on his criminal past with a mixture of piety and defensiveness, a propaganda tactic he shared with Jesse James.

The autograph book, appraised at between $20,000 and $30,000, bears witness to a peculiar time in American history, when murderous, rampaging thieves became unalloyed heroes, or at least celebrities, to so many — including Peg's great-grandfather, who worked for the very institution that was charged with collecting the Youngers' debt to society via years of hard labor. Somehow, the times allowed the Jameses and Youngers to overcome the facts of their grisly livelihoods in the popular imagination. However, the autograph book neatly refutes a myth often subscribed to by those who bought into Jesse and Cole's propaganda: that the Youngers, through their wiliness, never spent a day in prison.